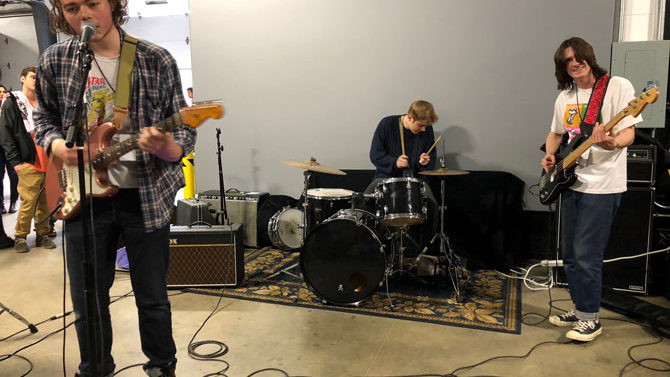 HI, THERE. HELLO: New Athens label Avenue Noise and Sound had already distinguished itself with the cool Live in the Lobby release from The Pink Stones back in March, but there’s a new digital platter that just came out under the imprint that deserves some attention, too. It’s titled What’s Behind You, and is by Telemarket. Members include label founders Hunter Pinkston (The Pink Stones) and Adam Wayton, as well as Pink Stones member Jack Colclough. This EP is of twin, yet entirely mixed, personalities that blend quite well. First, there are softly strummed pop tunes like the title track—which also features a fuzzy wormhole of a wah-pedal midsection—and the second track “Wait (the Jordaan Hipster Song).” Then—and this is the only real example of this here—there’s the grunge/garage blast of “Dynamite Girl” and the mid-tempo and semi-submerged “Red Heron.” The only wishy-washy track is closer “Nothing At All,” which feels sloppy and half-finished, even though it has likely the most complicated arrangement of any of these songs. Quite honestly, if Sarah Records and Creation Records had ever agreed to do a split release, this would have been it. Check it out at avenuenoiseandsound.bandcamp.com, and glean slightly more information at avenuenoiseandsound.com.

GIVE TO THE CAUSE: On Thursday, May 10, AthFactor-Liberty Entertainment will host a Town Hall Benefit Bash at The World Famous as a fundraiser for the annual Hot Corner Festival. This event also serves as an opportunity to hear from Athens candidates for elected office and incumbents. Organizers note that there have been multiple events held for candidates to address constituents, but this event is scheduled specifically for workers who couldn’t attend other events or don’t enjoy traditional political forums. To this end, speakers and musicians are staggered in the scheduling, which runs on the half-hour beginning at 9 p.m. (half an hour of speakers, then half an hour of music, etc.). Confirmed speakers are Kelly Girtz, Harry Sims, Tim Denson, Jared Bailey, Russell Edwards, Patrick Davenport, Carl Blount, Linda Davis, Tawana Mattox, Imani Scott-Blackwell, Ovita Thornton, Tommy Valentine, Melissa Link, Kara Dyckman, Greg Davis, Mariah Parker and Bill Overend. The musicians playing are Claire Campbell, Ishues, Sarah Zuniga, Motorhead2x, Blind Astronomer and Eric Johnson. Doors open at 8:30 p.m.

SATURDAY SCHOOL: In related news, AthFactor founder and Athens hip-hop ambassador Montu Miller will host the next installment of his film series “It’s Bigger Than Hip Hop” at Ciné on Saturday, May 12. The film this time around is the 1984 classic Beat Street. Screen time is 10 p.m., and the Stella Groove Birthday Bash happens in the Ciné Lab following the film.

HIT THE ROAD: Show promoter Alex Nicholson is doing another instance of his DeBellapalooza event in Blairsville. Named for the family upon whose property it takes place (i.e., the DeBells), this year’s ’palooza happens Saturday, May 26. The DeBells are also the benefactors for this whole shebang, and to this end, they provide their land, food, drinks and camping for free. So, if you go, please be mindful that you are there due to someone else’s largesse, and be polite and thankful. Donations are also appreciated and encouraged. Featured Athens bands performing are Kwazymoto, Jet Phase, Chris Gustin and Birds Fly South. For more information, see debellapalooza.wixsite.com/musicfestival, or drop Nicholson a line via aylex17@gmail.com.

DON’T FLINCH: The new album by Futo (aka Patrick Brick) is out now courtesy of Marching Banana Records and it’s named In Heaven, All My Jokes Will Kill. Fans of old-style Futo (electronic/pop/sorta glitchy) will need to get through the first couple of tracks before getting to anything remotely familiar-sounding. That said, listeners cheat themselves if they skip the first two tracks, each of which are drop-dead gorgeous acoustic tunes that had me kind of hoping the whole album would follow suit. He touches briefly on this style again later in the record, but doesn’t approach the achievement of the opening tracks. The meat in the middle is all a little darker and messier and burdensome than we’re used to hearing from Futo. Indeed, his last few releases have been pretty emotional things, but this material is expressionistic in a way that’s more physical than psychic. Enjoy it at marchingbanana.bandcamp.com.