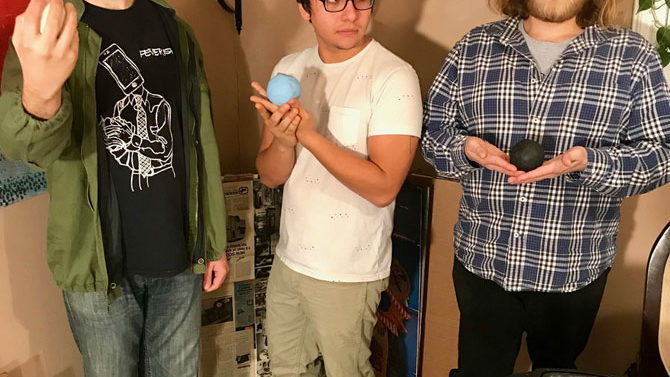 LOOK ALIVE: Marching Banana Records just released the first new music in almost three years from indie rockers Dead Neighbors. This new eight-song collection, which writer Nathan Kerce reviewed in the Feb. 28 Flagpole, is named Less. This is the first local album in several months for which I wish I had a lyric sheet. Throughout the record, the band delivers a mix of prickly and bare emotional expression via its Volcano Suns-meets-diminished-Superchunk guitarisms and vocals. There’s a sadness all over this thing that I could likely identify if I had the lyrics. But that’d be an easy excuse to just put all that feeling back on the band, instead of accepting the dull ache and vague longing Less adeptly inspires. The album was recorded in less than a day back in October 2016 with engineer David Barbe and mastered by Jason NeSmith two months later. To listen in, see marchingbanana.bandcamp.com and deadneighbors.bandcamp.com.

T FOR TEXAS: Flagpole hits Austin, TX this week for South by Southwest. In addition to showcases and parties thrown by local organizations HHBTM Records, New West and Normaltown Records, Public Access Touring, Tiger Bomb Promo, Crashing Through Publicity and the Georgia Theatre, we are once again a sponsor for the Athens in Austin day party on Saturday, Mar. 17 at Austin’s Side Bar. Featured artists for this strictly 21-and-over event are Easter Island, Mighty, Teddy and the Rough Riders, Acid Dad, Honduras, Bones, Cicada Rhythm, Faux Ferocious, Linqua Franqa, Plastic Pinks, Eureka California, The Nude Party, Lee Bains III and the Glory Fires and Double Ferrari. Look for photos from the week, recaps and other news from the front to appear on Homedrone. For more information, see athensinaustin.com.

WELCOME BACK: After almost 13 years, the debut album from Still, Small Voice and the Joyful Noise has landed on the internet. It’s titled With Love for Our Enemies, and was one of the best Athens records of the early 21st Century, when the band had some real momentum behind it. Its sound is kind of that classic Athens indie-folk-pop with slight—very slight, actually—psych tendencies. Songwriter Chip McKenzie’s lyrics still shine as real poetry and, for my tastes, hit their peak with “Mercury Dime.” Do yourself a favor and catch up at stillsmallvoiceandthejoyfulnoise.bandcamp.com.

LAWYER UP: Protect Athens Music, the annual event coordinated by UGA Law, will happen again Wednesday, Apr. 18 at the 40 Watt Club. The event’s purpose is to promote and discuss legal issues relevant to the music community. In order to better serve attendees, Protect Athens Music has a survey out seeking knowledge into which issues are most important to those concerned. Find it at facebook.com/ProtectAthensMusic and let these good folks know what you’re thinking.

I PUT A SPELL ON YOU: New Athens band Hex Party has released the five-song EP, whose title is pretty much the height of efficiency. It was recorded by engineer Peter Goebel, mixed by Hank Sullivant (MGMT, Kuroma) and mastered by Joel Hatstat (Cinemechanica). These five songs are such a nice surprise to hear this week. They each hit that sweet overlapping ground between ’70s hard rock, late-’80s crossover punk and early-’90s shoegaze. This is easily the most Mudhoney-ish record to happen in town for a very long time. And, as far as I’m concerned, Mudhoney was—and is—the absolute best band to come out of the grunge scene, so you can take that comparison as a fairly explicit endorsement. Here’s to hearing more good things from these dudes. Check it out at hexparty.bandcamp.com.

ALL DOGS: T.A. Ashe makes music under the name flur, but he also makes experimental music under the name Peruvian Dogs, and that’s what I’m here to tell you about. A new record is out now called Pr. The five tracks here are each named with three letters and a number, and I have no idea what they mean, so I’m not gonna bother mentioning any individual track. What I will say, though, is that this record is deeply motivated, serenely meditative and easily as good as anything released by experimental godheads Village of Savoonga, which is what this reminds me of most. It makes great use of field recordings, repetitive sound clips and decisive editing. TL;DR: I really liked this. Go hear it at peruviandogs.bandcamp.com.