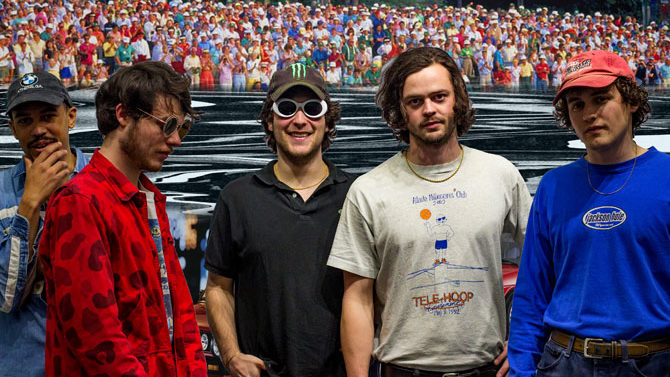 ELECTRON BLUE: The guys in Wieuca are releasing a new four-song EP this week named Local Celebrity. This is the first release with new members Jack Webster and Andrew Cleveland. Overall, it’s a little more outsider-y than the band’s previous releases and takes some real head-dives into weirdo land. This is especially true on “Friendster,” which has guest vocals from Atlanta’s Faye Webster, and the title track, which is a glitch-laden, computer-voiced thing. The whole thing is pretty synth-heavy, but if you go back and listen to the group’s other records, it’s fairly easy to hear it was always headed this way. You can grab this digitally starting Feb. 16 at wieuca.bandcamp.com and as a clear vinyl 7-inch at local record shops. For more information or to just be a pal, head to facebook.com/wieucaband.

ONE NIGHT ONLY: UGA’s Willson Center For Humanities and Arts is hosting a special show by Kishi Bashi at Seney-Stovall Chapel Thursday, Feb. 15. The performance is billed as a “multimedia event built around Omoiyari,” which is the film Bashi made about Japanese internment in the U.S. during World War II. Joining him this night on stage are Julian Saporiti, Erin Aoyama and a string quartet. A panel discussion moderated by UGA professor of history John Morrow will follow the performance. This event is free but strictly limited to 155 people. Online reservations for the first 85 tickets happened a few days ago, and I’m pretty sure they’re all gone. That said, 70 seats will be available at the door, and obviously, they’re first-come, first-served. However, at 7:30 p.m., any online reservations that have not been claimed are to be released to the public, so here’s to people showing up late, right? The performance begins at 8 p.m. For more information, bother the good folks at willson.uga.edu.

THAT’S THE ANTHEM: An EP is out now from Anthemusa, a new project by Corey Flowers (Jet Engine Dragons, Beast Mode) and Ross Hardin (Jet Engine Dragons). It’s titled Ghost Companion, and it’s a marked departure from those musicians’ other bands. These instrumental tracks maintain a course of heavily driven post-rock without sliding into numbskull wankery and effects use for effects’ sake. Aesthetically, Anthemusa isn’t terribly aligned with many other bands doing this stuff, and there’s still a little metal edge poking out at times—e.g., the end of “Don’t Go Into The Light”—which is a solid tip to the guys’ roots. The only problem with this is that it’s too short to really get a feel of what they’re going for, but Lord knows that’s better than going on for too long, so count your blessings. Check it out at anthemusa.bandcamp.com.

BRAND NEW THING: New-to-town songwriter and performer Matt Hodge plays music under the name Bedrooms. He worked on his debut EP last fall, and it came out a couple of weeks ago. It’s named Tangerine, and it’s a pretty decent demo-level exploration of indie R&B. The only real stinker here is Hodge’s cover of Jay Americana’s “Always,” and it’s not that he does a bad job with it per se, but the original track isn’t that great to begin with and really doesn’t fit here. Of the remaining four songs, the highlights are “Blu Skies” and the 54-second “On the Couch.” There’s some decent raw material here that just needs further fleshing out and a good polishing, but Hodge is off to a good start. Also, because nothing in life is easy, you’re gonna have to search for this one on your own via iTunes or Spotify.