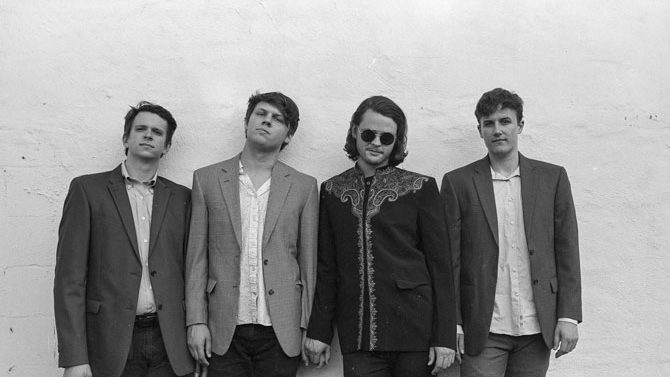 ROLL THE WINDOWS DOWN: The new album from Juan de Fuca came out a couple of weeks ago, and it’s named Solve/Resolve. As the group grew from a solo outlet for Jack Cherry’s songwriting, it became more and more of a band, with the sense of everyone beginning to contribute to composition, arrangements, instrumentation, etc. Kudos to Cherry for not holding the reins too tightly. Solve/Resolve is a nice little slab of indie rock with several familiar jumping-off points (Strokes, DIIV) that does each some justice. There are scattered moments of pretty gentleness, too, but for the most part this whole thing is a cool rock and roll record half gazing at its shoes and half looking ahead. Its release comes courtesy of Athens’ Arrowhawk Records. Listeners can stream most of it at juandefucamusic.bandcamp.com. For more information and purchasing info, see arrowhawkrecords.com.

EASY PICKIN’: Art Rosenbaum and Tommy Jordan will host an interactive workshop and performance at the State Botanical Garden of Georgia’s Day Chapel Thursday, Jan. 25. The workshop begins at 4:30 p.m., and musicians are encouraged to bring instruments to participate. Please also note that the music played here today is folk, old time, bluegrass and associated styles, so bring appropriate instruments if you’re going that way. The concert happens at 7 p.m. This is all free and open to the public, but due to limited seating, you should make a reservation via botgarden.uga.edu/event/pickin-at-the-garden. The combined resumes of these two could fill a book, so check them out via tombobd41.wixsite.com/tommyjordan and artrosenbaum.org.

DEW DROP INN: If you’re in town attending the annual Georgia Music Educators Association conference, I salute you and thank you for your efforts. However, even those of us not attending can benefit from associated events. First, on Thursday, Jan. 25, Gordon Vernick, a professor of music and coordinator of jazz studies at Georgia State University, is hosting a jazz jam at The Foundry from 8 p.m.–midnight. This event is free and open to the public. See thefoundryathens.com for details. On Friday, Jan. 26, the Spivey Hall Young Artists from Clayton State University will perform at Milledge Avenue Baptist Church at 7 p.m. More information is available at spiveyhallchildrenschoir.org. Also on Friday and starting at 7 p.m. is the Technology Takeover at Creature Comforts. This isn’t a performance, but rather a casual meet-and-greet for “music technology enthusiasts, newbies or the curious.” Conference attendees will have a chance to pick up an invitation card at the conference that allows free admission and a few rounds, but locals should plan on paying. For more information on the Georgia Music Educators Association, see gmea.org.

SAID I CAN DO THAT: All-female University of Georgia a capella group UGA Noteworthy is holding auditions. These take place Tuesday, Jan. 30 at 7 p.m. at the Hugh Hodgson School of Music’s room 304. Of note, this is open to beatboxers, too. For more information, see facebook.com/uganoteworthy.

NICE ONE: Matthew Garrison (The Humms, Elf Power) just released a new EP under the name Marble Soup. The full band features a crack lineup of players—Garrison on vocals, piano, bass and guitars; Zeke Sayer on synthesizers; Jake Stargel on guitars, bass and synths; and Cody Martin on drums. It was recorded at Stargel’s grandparents’ house, but overdubbed at Sayer’s Gypsy Farm Studios, and mastered by Jason NeSmith (Casper & the Cookies). Clocking in with a mere four songs, this little record does a fine job of exhibiting Garrison’s songwriting, which harkens back to NRBQ, a little Randy Newman and perhaps a slight amount of Gram Parsons to boot. All in all, a nice listen that arrived unexpectedly. Check it out at marblesoup.bandcamp.com.

SIGN ’EM UP: Hats off and lots of good luck is wished for new Athens record label True Blue Records. Formed in partnership between engineer Drew Vandenberg and longtime publicist and Arrowhawk Records owner Alyssa DeHayes, the label has upcoming releases that include South Carolina band The High Divers, but I can guarantee you these two have a lot more planned we just haven’t heard about yet. Visit trueblue-records.com.