Get Strung Out for a Good Cause at The Office Lounge 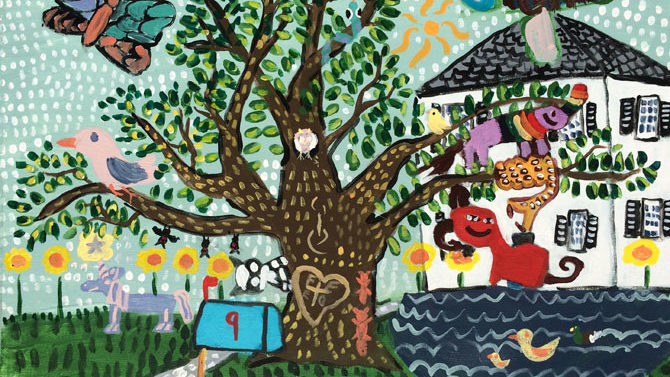 GOOD PEOPLE DOING GOOD THINGS: Longtime Athens-area musician and current mayor of Winterville Dodd Ferrelle will once again host the Strung Out Like the Lights at Christmastime benefit at The Office Lounge Friday, Dec. 15. Now in its ninth year, this benefit helps needy Athens area families, via the Empty Stocking Fund, with much-needed wintertime expenses such as heating, rent and utilities. It’s been a wonderful success in the past, and this year should continue that tradition. The lineup features Rev. Conner Tribble, Kate Morrissey, Clay Leverett, Pickled Holler, Me’an Mills (Ferrelle and Jon Mills, who moved to Athens together in 1993 with their band), Ferrelle and Betsy Inglesby (Ferrelle’s cousin), Ralph Roddenbery, Caroline Aiken and Catch a C.A.B., Elite tha Showstoppa, Will White & the Howlin’ South and Ty Manning and the Slawdawg Biscuits. As always, there will be a raffle held for the annual Ferrelle family painting, which you can view on this page. The show begins sharply at 6 p.m. so don’t dawdle, and bring the $10 suggested donation. This is a benefit, after all, so cough it up.

SEASONAL SPECTACULAR: The Morton Theatre will host Holiday at the Morton on Tuesday, Dec. 19 at 7 p.m. The all-star lineup is drawn from Athens’ diverse and talented community that resides just outside our more-often celebrated rock and roll scene. Participating in the celebration are the East Athens Educational Dance Center, the kids of Athens Creative Theatre, Shimmy Mob, Celest Divine, Florence King, the Classic City Jazz Band, ¡MOYUBA! and Athens’ own world-traveling star of the stage Calvin Orlando Smith. This show is free, open to the public and will most assuredly be packed. Plan to arrive early. For information, see mortontheatre.com.

NOW HEAR THIS: A brand-spankin’ new collection of classic live tracks from Squalls—appropriately titled Live—is out now. It features 24 tracks recorded by legendary 40 Watt Club soundman Pat “The Wiz” Biddle between 1980–1985. Biddle selected the tracks from five complete shows he recorded back in, you know, “the day.” Longtime listeners should be happy to see the inclusion of well-known favorites like “Na Nanana,” “Elephant Radio,” “Waltzing Mathilda” and early single “Crickets.” All of this was recorded before the band released its debut album in 1986, and is such a cool primer on Squalls in particular and this era of Athens music in general. It’s available at cdbaby.com and locally at Wuxtry Records and Low Yo Yo Stuff.

TOOT YOUR OWN HORN: As the holiday season intensifies, everyone’s calendar becomes increasingly packed. Well, clear the decks, buddy, because TubaChristmas is happening at Georgia Square Mall Saturday, Dec. 16, and if you’re a tuba or euphonium player, you may participate. First, you’ll need to rehearse on your own with a copy of the songs, available at tubachristmas.com. Then, you’ll need to arrive on the 16th at 9 a.m. to register as a player, be available at 9:30 a.m. for rehearsal and perform with everyone at 11:30 a.m. Registration costs $10, and it looks like music costs are between $20–$25. All the information you’ll need is at the aforementioned website, including information explaining its origin. Locally, this event is being arranged by the folks behind facebook.com/AthensTubaCmas. So, if you have any questions, hit them up there or drop a line to athenstubachristmas@gmail.com. And, for those of you who aren’t players, just go and enjoy the show. I’m betting this will be something to see.

HATS OFF: The folks behind the Athens Cowboy Choir, along with hosts Pete McBrayer and Matt Hudgins, will host A Very Townie Christmas at the 40 Watt Thursday, Dec. 14. Among the featured acts are Dave Marr, Don Chambers, Claire Campbell, T. Hardy Morris and Bain Mattox. Expect to hear all your favorite Christmas songs and, as I’ve been told, some “deep cuts” and lesser appreciated tunes, too. This show is acting as a food drive for local food banks, so it’s gonna run ya $10 to get in, or a mere $5 if you bring a canned good.

BACK AGAIN: Two weeks ago, I told you about the new two track release from Space Brother named Mountains. This week, the news is there’s a full-length companion piece to it named Deep End—which carries on the theme and is written as Dâ€‹=â€‹=â€‹|â€‹> =â€‹|â€‹â€‹| D—whose contents are shorter and thus more compact, but no farther away from the outer edge of reason. There’s a loose theme of departure and travel here, but that’s likely my own interpretation and not intentional. Objectively, there are glitchy electronics, more dub-oriented rhythms and the like. Head to spacebrother.bandcamp.com and listen in.