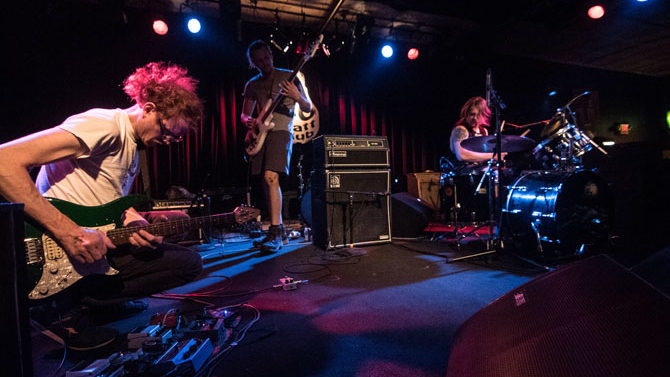 GOODNIGHT: The Athens music scene is often a place of uncelebrated beauty, featuring the quiet dignity of craft development and particularly touching moments of specialness. On the other hand, there’s the debut album by Fart Jar, This Is Not a Drill. The whole thing is obviously a joke, but even so, there are passing moments of pretty catchy, riffy faux-metal. You’ll grin and maybe shimmy imperceptibly to “WizardSpoon,” remember you have a filling to replace when you grind through “Triple Chocolate Chunk,” and finally just go ahead and drink that 14th beer as you try to power through the screaming, postage-stamp-sized “Bees!” Man, I dunno. Athens has had bands like this for decades, and basically none of them has ever been terribly memorable, particularly fun or substantially worthwhile, even for those directly involved. But I suppose there are worse ways to be distracted. If you want a physical copy, it’ll run ya $10, but hell, I’m easily 10 bucks dumber for having written this much about it already, so what do you have to lose? Do your thing at facebook.com/fartjar, and pony up at fartjar.bandcamp.com.

DREAM WARRIORS: The full length debut from screamo/hardcore band Nightmare Coast is out now, and it’s titled Thoughts & Prayers. My personal assessment of this release pretty much mirrors the one I took back in June, when a three-song teaser was released. That is, Nightmare Coast is primarily billed for its harshness and screamed vocals, but actually truly excels with its adeptness for melody and compositional integrity. To wit, the 30-second mark of “Open Your Eyes” features the song dropping from pretty standard 21st Century hardcore straight into an undeniable and memorable hooky section. Functionally, it’s an emotional release valve, but culturally, it’s easily as good as similar sections executed years ago by, for example, We Versus the Shark. Other highlights include the title track, “Goodnight Dinosaur” and the previously released “Midazolam.” Check it out at nightmarecoast.bandcamp.com.

SEE YA. BYE: Well, Einschlagen is over, but as promised, the band left us with six final tracks spread across two releases. The four-song Alligators—which I’d like to imagine is a nod to Echo & The Bunnymen’s Crocodiles—distinctively and forcefully puts Peyton Sarah’s poetic, spoken-word vocals front and center. The music itself is emotionally exploratory along the lines of early-to-mid-’90s Chicago and Louisville indie rock, but with a lot less macho posturing. The hyper-melodic rock-and-roll codas come via the two-song punch Later. Aubry Meers takes the vocal on “Return to Sender,” but I’m partial to the instrumental “That Time Spencer Fell Through the Ceiling.” All in all, and taken together, both releases comprise a fine parting shot. Go grab ’em at einschlagen.bandcamp.com.

WRAP IT UP: The final sessions recorded for the MOEKE Records Summer Singles series for this year have been released. Highlights from this batch are Subscriber, with the doo-wop-ish and pop-oriented “Junk Food,” and WF Addams, with the self-flagellating ’90s emo of “Whatever.” In other news, Brothers goes a little mellower and more acoustic, Saline holds its line just this side of weirdo art meandering, Junker contributes an acceptable yet unremarkable placeholder, and Gumshoe kinda loses me with the go-nowhere “Amarosa.” Your mileage may vary, of course, so take a spin over at moekerecords.bandcamp.com.

THREE FOR THREE: Adam Klein will wrap up his three-shows-in-three-weeks tour of Athens when he plays at Flicker Theatre & Bar Wednesday, Sept. 6 with Houston, TX artist Nathan Evans Fox, Augusta’s Philip Lee Jr. and Toronto’s Lindsay Foote. In other news, Klein began hosting a podcast recently in coordination with his role as program director for community arts with the organization African Sky. His first episode is with African Sky co-founder Scott Lacy, who is also the organization’s executive director, a Fulbright scholar and former Peace Corps volunteer. African Sky does community-based sustainable development projects in Mali, and Klein’s podcast aims to cover history, music, arts and other topics relevant to Mali in particular and West Africa in general. For more information, see africansky.org.