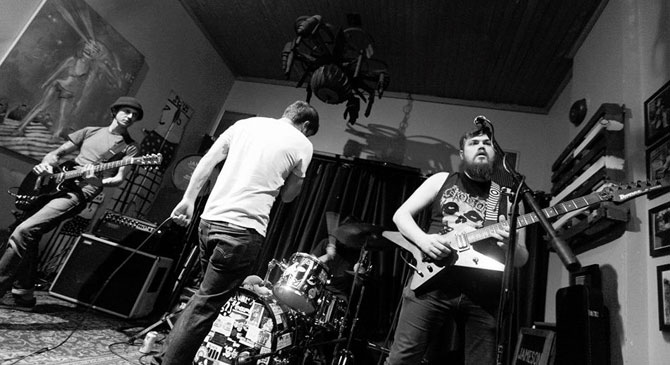 It’s AthFest, and that means a whole lot of folks are visiting us—some for the first time ever, and others for the first time in a year. Sure, it can be frustrating when there’s no parking, huge lines and nothing’s happening as quickly as you’re used to, but take it easy. These folks are our guests, and barring any obnoxious behavior on their part, they should be treated as such. To our guests, thanks for celebrating the Athens music scene with us. Have fun, stay hydrated, stay safe, and remember this is our home. Welcome to town—have a ball. Now that we’ve dispensed with the annual niceties, let’s see what’s happening in Athens music news this week.

OUTSIDE VOICES: Hardcore band Nightmare Coast spent the past year completing its debut album, and while it’s not available yet, there are three tracks for you to try on. The nominal single, “Different Names for the Same Thing,” is fairly standard 2005-ish screamo fare, and won’t really blow your socks off. The next two, though, are pretty cool and dynamically pleasing. “Midazolam” is almost a Pinback track, if that band occasionally dipped into hardcore fare, which is exactly what this track does. It lets its fury out in between nice runs of solidly melodic dual-layer guitar, and then winds itself up on a loud high note. “Open Your Eyes” is the most straightforward thing here, and while I’m not crazy about the extremes Nightmare Coast will take to execute its loud/quiet/loud aesthetic, there’s a solid fist-pumping chorus that ties the whole thing together. Check it out at nightmarecoast.bandcamp.com, and follow along at facebook.com/nightmarecoast.

TANGHALED UP IN BLUE: It seems even graduating college wasn’t enough of a reason for workhorse songwriter Daniel Tanghal to take a break. After releasing the trash-rock supreme Luxury Rehab a few months ago, he returned this month with the walloping, 22-track May. This new one is a little more exploratory, and embraces both Tanghal’s garage-rock tendencies as well as his gentler side (especially on the instrumental “Where Is Lauren?” and the personal-crisis whimsy of “College Degree”), but don’t be fooled: Tanghal’s “gentler side” is often barbed wire wrapped in cotton. As always, he’s a pointed lyricist with a sharp ear for melody, a prolific producer with a handy knack for flaying himself and easily one of the most satisfying and consistent artists in the past 10 years of Athens music. Dig it at danieltanghal.bandcamp.com. And don’t forget his sizable and rockin’ discography from back when he was still using the Meth Wax moniker, either. That’s all at methwax.bandcamp.com.

HERE YA GO: Mike Jefts, a former member of Sad Dads, released an album titled Be a Snake a few weeks ago. There’s something very mid-1990s indie-pop about this one. It’s not exactly shambolic, but it’s definitely teeter-y and occasionally excruciatingly lo-fi. That’s a bummer, because “Chance of a Lifetime” is one of the catchiest and most fully-realized songs here, and it’s almost impossible to hear. The bass line on “Valentine” is good and fuzzy, and works decently at holding up the ELO-ish guitar run that comes in near the end. I dunno. The whole thing really feels more like a demo than a proper album. Reportedly, Be a Snake is “a quarter-life crisis breakup album with a city (Athens) as much as a lover…” I’m not even gonna get into how much I hate the word “lover,” but also, if we’re breaking up, why do I need to keep engaging this? Check it out at mikejefts.bandcamp.com and see what you think.

ONLY THE START: It’s always a real treat when the MOEKE Records Summer Singles compilation starts coming out each year. The first two songs are available now and come courtesy of Nicholas Mallis & the Borealis (“Theme Park Days”) and Four Eyes (“Life Finds a Way”). For his part, Mallis does a fine job capturing the peak between 1980s fashion-pop and earnest sincerity that resides between Simply Red and Glass Tiger. Continuing on, Four Eyes’ Erin Lovett unsurprisingly does a remarkable job of breaking hearts anew by lyricizing the everyday minutiae that tends to pile up to non-minute levels. So, you know, party, cry, welcome to Athens, welcome to life. Go ahead and bookmark moekerecords.bandcamp.com, because you’re gonna want this.

UP ALL NIGHT TO GET SLOPPY: SlopFest will return to Little Kings Shuffle Club July 20–22 and Hi-Lo Lounge July 23. The event is a benefit for the Athens Girls Rock Camp. The first night is free, and the rest of the weekend will run you $10 for an all-inclusive wristband or $5 per night. Confirmed acts include Vincas, Illegal Drugs, The Powder Room, Space Dungeon, Burns Like Fire, Blue Blood, Seagulls, Lingua Franca, Cuddlefish and many more. There’s pretty much zero other information available, but there’s still time, and if I find out anything I’ll let ya know. Wristband sales take place on-site, so all ya gotta do is go to Little Kings when things start and buy one.