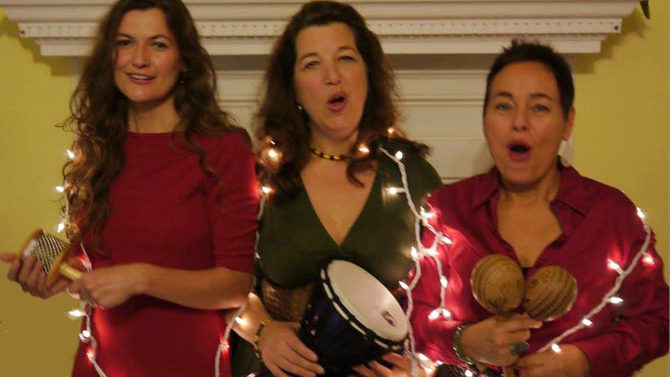 TRIPLE PLAY: The Foundry will host a holiday performance by a cappella group TRIO on Tuesday, Dec. 20. So, if you missed their performance on Dec. 11 at Hendershot’s, you can catch this one. No, it’s not the artsy Germans from the 1980s, nor is it the famous country supergroup. Rather, it’s the three voices of Athens’ own Marty Winkler, Lisa Cesnik-Ferguson and Kate Morrissey. Percussionist Tony Oscar will join them, so I suppose you could say there’s a little cantata in the capella. Selections will include traditional holiday favorites, newer holiday pop hits and even a handful of Winkler originals. It happens at 7 p.m. and tickets are $6 in advance and $8 at the door. Reserved tables are available with group pricing, and all advance tickets can be had by visiting thefoundryathens.com.

DO YOUR THING: The brain trust behind the AthFest Music & Arts Festival, AthFest Educates, is searching for volunteers for the festival’s 2017 planning committee. To this end, they’ve put out an open call for currently available positions. Specifically, they’re seeking a co-lead coordinator for KidsFest and lead coordinators for stage management and the artist market. Interested? Contact Jill Helme at 706-548-1973, or drop a line to director@athfesteducates.org.

ONE THING AT A TIME: Sean McDonald, founder of and chief recording artist for the MMM Sound label, has a new collection out titled Emoji Made Muse. It’s easily the most readily accessible music he’s released while still being on the outer fringes for most listeners. All the music here was created with drums, vocals and “thrift store keyboards.” The whole thing runs just over half an hour, and while it’s not divided into separate tracks, there are select moments of pause that feel like track breaks. I dunno. It’s OK, but the thing that’s bugging me about this is while McDonald has reached into the pop milieu and drawn out tasty hooks and solid rhythmic devices, he has defiantly refused to structure them into anything discernible. There’s a joy present in these compositions that isn’t in his previous work, but it remains difficult to enjoy this particular part of his journey with him. Your mileage will vary, of course, so strap this on over at soundcloud.com/mmm-sound.

HEADS UP: A cool benefit show for an under-appreciated segment of our town will happen at The Foundry Friday, Dec. 16 from 6–10 p.m. Several middle- and high-school musicians from around Athens have gotten together to raise money for our local Meals on Wheels program, which is administered through the Athens Community Council on Aging. All proceeds from this night go to this awesome cause. A variety of musical styles will be presented, and featured artists include Connor Byers, Zenith Blue, Benjamin Simpson, Simone Zaccaria Jeffers, The Varsity Band and The Voltures. The audience will vote at the end for their favorite song of the night, and the artist that performed it wins an opening slot at The Foundry in 2017 for a to-be-decided national act. Advance tickets are $10, a family pack of four is $25, and you can buy a whole table for more if you’d like. The show is all-ages, and tickets can be purchased at thefoundryathens.com.