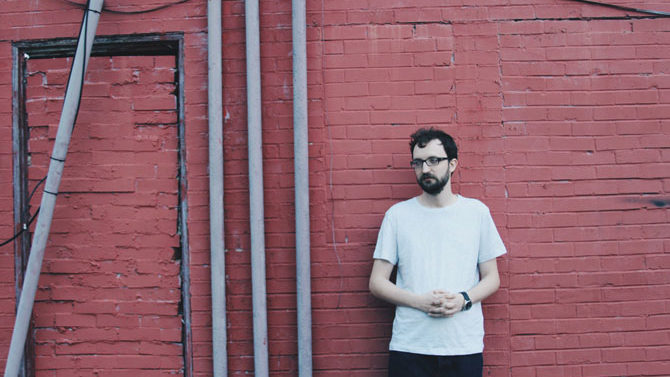 TALK TO ME: Composer Ryan Rudder released a new album under his Echo Constant moniker last week. Breakfast features 10 tracks of sample-free indie hip hop that floats Rudder’s lyrics and vocals over tracks that would be totally ambient were it not for his trap-tinged production. Significantly, Rudder raps in his own voice. That is, he performs comfortably in his own skin as an independent producer with a voice that could never be described as “hard-hitting” but is, rather, conversational and consequently quite personal. This is the first real example of this type of local hip hop—born from an indie rock sensibility—since Jamie Radford released King of the Classroom back in 2006. Don’t grab this if you’re looking to blow up your block with bass. But check it out immediately if you’re in the market for a postcard marking the intersection of hip hop, home recording and a peek into a producer’s plaintive diary. Click over to echoconstant.bandcamp.com for details.

ATROCITY EXHIBITION: I tried my darnedest to perform some due diligence on this, but after two weeks of research and even writing to the “band” itself, I can barely tell you anything about the transcontinental duo Men’s Residence. Well, I can tell you there are two fairly new releases titled Hatred Within and Strictly Platonic. And I feel confident relating that the former is two tracks of ear-splitting harsh-noise-isms clocking in at a total of 25 minutes. It’s probably OK, too, to say that the latter is more deeply composed and incorporates slight glitch, found sound and samples into a similar overall fabric, but nothing nearly as brutal as the first one. Further, the two folks involved in this go by the names Andi Rusk and Ryan Pensyl, and one lives in Athens and the other in Oakland, CA. Finally, you can find both of these over at mensresidence.bandcamp.com. Beyond that, I really can’t say anything about this, because I just don’t know.

SWEAT LIFE: Now that you’ve done your time sweating out festival life in the streets during AthFest, you can adjust your sights to sweating it out in a single room! That’s right, it’s time for that annual marathon of the known, up-and-coming and totally unknown to gather at Little Kings Shuffle Club for SlopFest. This year’s event happens July 21–24 and will run you $8 for a whole weekend wristband or, because most of Athens is horrible at both budgeting its money and keeping track of a wristband, $5 each night. SlopFest is a benefit for the Athens Girls Rock Camp, and featured acts include Deep State, Blunt Bangs, Shehehe, Harsh Words, Hot Fudge, The Fuzzlers, Hunger Anthem, Hayride, Savagist, The Powder Room, Vincas, Feather Trade, The Rodney Kings and many more. Advance wristbands are available at Little Kings, so skip your next three beers and go grab one.

SCOOBY SNACKS: Athens psych-noise experimenters Smokedog seem to hardly do anything anymore, but when they do, it’s generally OK. To wit, two new short releases titled Cleaners (featuring exactly one track titled “Takes It to Cleaners”) and Tlaloc (featuring two tracks of live jams recorded during Tlaloc Mexican restaurant’s day-long Cinco de Mayo event). Cleaners is kinda whatever, with its go-nowhere feedback drone that’s only slightly dynamic toward its very end. Tlaloc, though, is a lo-fi psych nugget with full guitars, drums, etc. Nothing super essential, but not a bad headphone snack if you’re already online searching for something to listen to. Chomp it at smokedog.bandcamp.com.

PETIT FOUR: The first four songs in this year’s MOEKE Records Summer Singles series were released this month. The conceit is the same as always: Bands are given a four-hour window at The Glow Recording Studio to record, mix and master their song, and the results wind up on a digital compilation. This first batch features tracks from Neighbor Lady (“Consider Me Mean”), Wanda (“Jessica Mystic”), Jianna Justice (“Plant Growth”) and Lord Gordon-Gordon (“If You’re Lonely [See The World]”). Neighbor Lady does a really good job of putting the sleep back into your eye and making you feel like you’ve not yet really been awake, so why push it? Overall, it’s kinda murky, slow and meandering, not unlike an Athens Sunday morning. Wanda breaks its lengthy silence with a solid albeit subtle nod to Fleetwood Mac. Jianna Justice continues to make strides as a songwriter with a distinctive personality, and the textured arrangement here is proof of that. The newly minted Lord Gordon-Gordon wouldn’t do bad to look for a better name, but could do a lot worse musically than the upbeat, ’60s pop throwback performed here, which is actually much more like the early 1980s Los Angeles/Paisley Underground scene than anything from the ’60s proper. Which is a plus in my book for sure. Check it all out at moekerecords.bandcamp.com.