Cars Can Be Blue’s Becky Brooks to Undergo Cancer Treatment 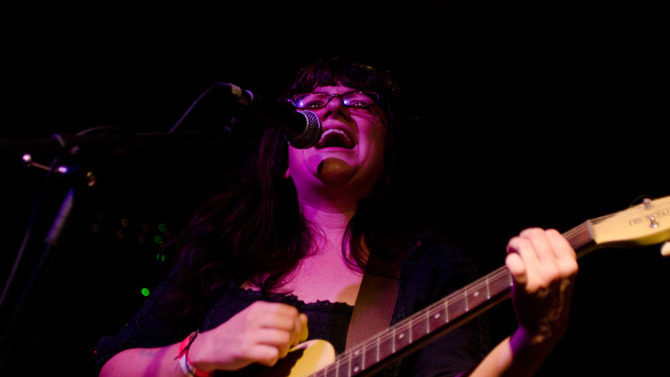 SCREW CANCER: Longtime Athens musician, seamstress and designer Becky Brooks (Cars Can Be Blue) was diagnosed with breast cancer last month. A fundraising effort was established last week to provide for her comfort and lessen her worry over daily needs being met while undergoing treatment, and the Athens community has responded generously. Brooks’ specific cancer will require chemotherapy, as a lumpectomy or even mastectomy will not protect her entire body. Thus far her doctors seem to have a solid plan of treatment in mind and a clear path of procedure, but this is a scary time for her and her loved ones. Please consider helping with any amount at gofundme.com/24zhbmc.

NEW ‘TUNE: The only Athens band that deftly blurs the already blurry lines between psychedelia, shoegaze and indie bliss, Fat Neptune, just released a new single named “Fluff.” It’s a follow-up to the group’s self-titled EP from last December. Bassist Michael Purvis handled engineering duties, and overall it doesn’t veer too much from the blueprint the band already had in place. More specifically, it’s a continuation of its tasty blend of soft vocals, impeccable sense of melody and fuzzy guitar hooks. It is, though, a little more directed and focused than the stuff on the EP, which should mean that when it’s time for a full album, everything’s gonna be crystalline. Listen over at fatneptune.bandcamp.com, and keep up with the band at facebook.com/fatneptune.

LET ’EM EAT CAKE: OK, so there’s this duo named The Cupcake Conquistadors that has been operating in that totally self-conscious, overtly humor-laden way since 2010. Past releases include titles such as Every Day Is a Good Day For a Homicide, The Good Hooch Is That A-Way and I Was Shit-Faced and He Was Nigerian. Their newest release is titled Bananabilism 2016, and, of course, there’s a dude on the front in a banana costume eating a banana. By every single personal standard of mine, I should hate all this in a totally hardcore way. But I set this latest album a-streaming the other day, and dammit if there aren’t some really sweet, painfully personal songs on here. To wit, “I Don’t Wanna Be Your Boyfriend” is a total tearjerker. “Sweet Marie” is wistful and tuneful and lovely. Even the faux-radio outro “All That You Wished It Could Be” is kinda touching. They are, like most of the Cupcake’s music, simple guitar compositions. I dunno. Maybe I just had a soft moment that day, but I swear there are gems among the jokes. Check ‘em out at thecupcakeconquistadors1.bandcamp.com.

WOBBLE WOBBLE: Athens-based Echobass Records has exactly two artists with a jaw-dropping 18 releases. Razzi King is straight up post-’60s old-school reggae with a healthy dose of dub, and the all-instrumental Cabbage Looper is electronic dancehall-styled loops, beats and grooves. The latest Cabbage Looper release, Mayday, is credited to “C-Loop” and digs a lot deeper into the groove side of things with leaden-paced head trip inner-space meanderings. The tracks, named for the days of the week, keep this slow pace all the way from “Moonday” to “Wednesday” but pick up the rhythm on “Thursday,” which stays steady through “Saturday.” Then, on “Soonday,” things crash headway into clanging guitars and an overall sense of weariness and dread. All of which is to say: Hey, Athens! Cabbage Looper just wrote an album describing your whole week! Check this out at echobassrecords.bandcamp.com.

THIS IS YOUR SLICE OF LIFE: OK, 99 percent of the time this column is 99 percent local music, but this next bit is just too important to ignore. Athens will receive a very special visit from legendary bassist, guitarist, songwriter and author David J (Bauhaus, Love and Rockets) very soon. On Monday, June 13 he’ll appear at Avid Bookshop from 6:30–7:30 p.m. in celebration of his book Who Killed Mister Moonlight?: Bauhaus, Black Magick and Benediction. This critically acclaimed tome came out in 2014, and I bet if you’re nice he’d autograph it for ya. This appearance is free of charge. The next night, J will play at ATHICA as part of his current “living room” tour. Due to the intimate setting and limited seating, no one will be admitted without an advance ticket. They are $25 and must be purchased from davidjofficial.bandcamp.com. No tickets will be sold at the door. Nada. None. Zilch! Also, a minimum of 25 tickets must be sold or this show will not happen. So get on it. I bought mine already. Doors open at 7 p.m. and the whole thing should wrap before 11 p.m. By a ticket, and don’t be late. And thanks to Avid, ATHICA and everyone involved in making this happen.