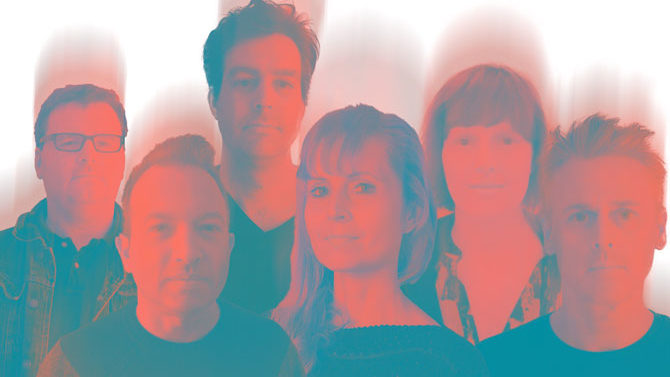 TAKE NOTE: Sometimes it feels like it’s been a whole year since I first told you about the new self-titled album by Japancakes. Actually, it’s been exactly that. The band’s first project in nine years was announced in this space way back in April 2015, and it’s finally gonna see the light of day May 6. Fans of the group’s well-known instrumental work, which often grew out of the simple idea of playing a single chord over and over until it grew into a thing of its own, will be surprised. This new album is their first to feature vocals, courtesy of Carrie Clough, formerly of San Francisco band Call and Response. Japancakes was often ahead of its time, especially in the South, and it seems the world may have caught up to them a little bit, as this music finally sounds completely contemporary. The vocal addition, too, is a wonderful expansion of the group’s creativity, and these songs are among the best work they’ve ever done. On a personal note, it’s pretty cool to see one of the most talked-about and artistically solid Athens bands birthed during the last gasp of the 1990s return with such eminently pleasing work. Check out the most sparsely updated page in history at facebook.com/japancakesmusic.

FREE YOUR MIND: Experimental compositional group Thunder O(h)m! released its newest set of recordings last week. Swerve Inversion is a collaborative project between the core group (Killick Hinds, Brad Bassler, John Norris and Jamie Thomas) with vocalist and poet Life the Griot. If you’re not immediately familiar with Life’s music, you might know him from his fantastic program Chess and Community (chessandcommunity.org); most of the lyrical content here reflects the ills that program seeks to address, clarify and correct. Killick notes that this collaboration was born out of both his and Life’s “inward journey through meditation.” It’s a powerfully effective record that feels improvisational yet deeply deliberate and considered. It’s movingly personal yet universally thought-provoking for anyone who doesn’t have a heart of ice. Listen closely at killick.bandcamp.com.

FARM TO TABLE: The musical lineup for this year’s Wildwood Revival, which happens Aug. 26–28, has been announced, and it’s totally solid. The three-day event will feature headlining performances from Gillian Welch, The Lone Bellow, Houndmouth, Hackensaw Boys, Legendary Shack Shakers, Lost Bayou Ramblers, J.P. Harris and the Athens Cowboy Choir. Other artists include Thayer Sarrano, Sammy Brue, Ancient Cities, Big George Brock and more. This event sells out every year, so if you’re on the fence, go ahead and hop off it. VIP tickets are $249 and general admission passes are $78. See wildwoodrevival.com for all other information.

THIS ONE IS BETTER: The band formerly known as Sleeping Red Giants is now known as Future Lives. Formed last year, this is the ongoing project of Brandon Taj Hanick (ex-King of Prussia). The band has finished the mixing of its album Mansions with engineer John Keane. The raw tracks were recorded at Hanick’s home studio, Soft Magic, and at The Glow Recording Studio with engineer Jesse Mangum. For the uninitiated, the group describes itself as “twangy chamber pop,” so if this is your bag, follow along at facebook.com/sleepingredgiants.

PUT THE BITE ON: Infectiously clever and tuneful posters Casper & the Cookies just released a 21-track compilation of live recordings. Live With Teeth: 2003–2007 is a benefit release for a friend of theirs who is having a stupid, ridiculous and life-threatening battle with her insurance company. True to the album’s title, the record compiles live performances of the group recorded between 2003–2007 from locales such WUOG’s lobby, Tokyo and Brooklyn, NY. Only two tracks are available for streaming—it’s a benefit, after all—so go check it out at casperthecookies.bandcamp.com and consider throwing down the entirely reasonable seven bucks requested for it. Sing along over at facebook.com/casperandthecookies.

MORE THAN MEETS THE EAR: Following closely on the heels of his Flagpole-premiered single from last month, “Green,” Futo has released his newest full-length, Futo’s Greatest Hits. The 11-track electropop record contains every bit of everything anyone has ever enjoyed about Futo’s music. In particular, the slow-to-mid-tempo keyboard melodies are in full force, the sparing use of guitars is thankfully still sparing, and the pleasant surprises like the sound effects on “The Ocean Floor Pt. 1” and “The Ocean Floor Pt. 2” are still pleasantly surprising. Additionally, Patrick Brick—the dude behind Futo—is a stunningly good lyricist, and that element tends to get super lost within this genre, so pay attention. Check it out at futo.bandcamp.com.