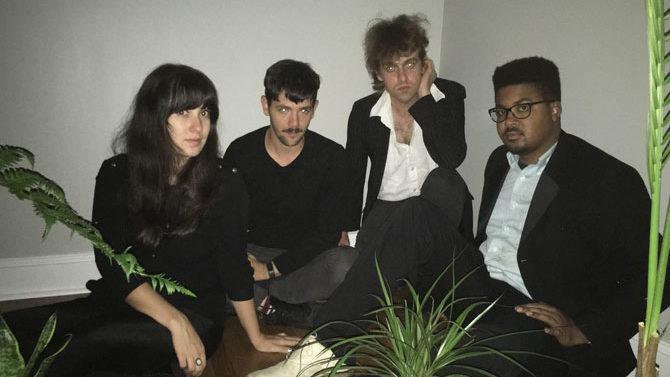 VINTAGE VIOLENCE: Jock Gang, which has been straddling the Athens-Atlanta divide for about a year now, just released a new EP titled, of all things, EP. The former duo of Jared Collins and Kimberly Drew has been augmented by Jonathan Merenivitch and Adrian Switon, both of Atlanta post-punk band Shepherds. The record notes indicate it was recorded over a year ago, so I’ve no clue who all is actually on this thing. All you need to know is that it’s alternately nervous and chill, subdued and in-your-face, self-consciously artsy and intelligently straightforward. The guitar tracks are nicely textured such that they’re sometimes smooth sheets of barely-there sound and other times spindly, reedy and vibrating in a way that teeters on being totally out of tune. The next-to-last track is the previously released “Tell Me About It,” which you first heard on the Danger Mouse-coordinated 30th Century Records Compilation Volume 1. Jock Gang is best listened to on a loop, so set this one to play over and over. Dig it at jock-gang.bandcamp.com, and join the gang at facebook.com/jockgangband. They next play Athens Mar. 26 with of Montreal at the 40 Watt Club.

ADULT EDUCATION: The organizational body behind Girls Rock Camp, Girls Rock Athens, are hosting a second edition of their Ladies Rock Camp May 13–15. This event functions as a support event for Girls Rock Camp and is open to women 18 and older. In addition to raising funds and finding volunteers, Ladies Rock Camp is similar in programming to the younger-person-focused Girls Rock Camp. Participants will form bands, learn instruments, write songs and host a show all within three days. All skill levels are welcome. Tuition is $200 per person, but there’s an incentive of 50 bucks off this if you sign up with another person. A deposit of $50 is due at the time your application is submitted. See girlsrockathensga.org to sign up and gather more information. Become a fan and follow along at facebook.com/girlsrockathens.

SEEN SERENE: Tom Visions (aka Tom[b] Television, Tom Television, Thomas Valadez) wrote, recorded and mixed everything on his new album, Time Waste. Its nine tracks are largely rooted in a traditional pop-rock structure but executed through a distinctly psychedelic prism. The album starts off with its strongest track, “From The Depths,” which really sticks to the ears via its almost motorik beat and downturned vocals. Another highlight, for basically exactly the same reasons, is “That Mystical Feeling.” Honestly, the best songs here are the ones that make an effort to avoid any predictable guitar rhythms, and as such, one song really fails (“I Became A Witch”). I mean, it’s fine, but a tad too jingle-jangle and Monkees-ish for the rest of this album. Overall, this clocks in at 88 percent solid, which is a total B-plus. Give it a digital spin at tombtelevision.bandcamp.com. Tom Visions plays The World Famous on Sunday, Mar. 20.

THIS IS YOUR BAG, MAN: Veritable Athens supergroup Purses will play Saturday, Mar. 12 at The World Famous in celebration of their new single. The two-song affair features “Hitchhiker,” which sounds a lot like The Replacements and Cheap Trick but with much smoother vocals, backed with “Wheels On the Run,” which follows in a similar vein, but the chorus is catchier and more of a singalong. The group, composed of Drew Beskin, Phillip Brantley, McKendrick Bearden, Hunter Morris, Jeremy Wheatley and Frank Keith IV, can lay claim to involvement in multiple projects in town over the years. However, it’s Brantley’s project Hand Stuff that is the most curious thing this night. This electro remix doodad is currently in the midst of finishing up a Jay Z/Beck remix album titled Odejay, and you can check its progress at soundcloud.com/handstuff. Also on the bill are Tedo Stone and DJ Quincy.

VISITING TEAM: The Netherlands’ Eerie Wanda will play the Caledonia Lounge on Saturday, Mar. 12. Fleshing out the bill are psych pop dudes Fat Neptune, upstart surf merchants Outer Sea and dedicated surf foursome The Flamethrowers. Eerie Wanda flexes its musical heft generally along the lines of blissful indie-pop of the Belle and Sebastian/Best Coast vibe, and is working its way toward Texas for SXSW. In the spirit of full disclosure, I should tell you that I am involved with the organization of this show. Now that that’s cleared up, head to facebook.com/eeriewanda2 for music, etc.