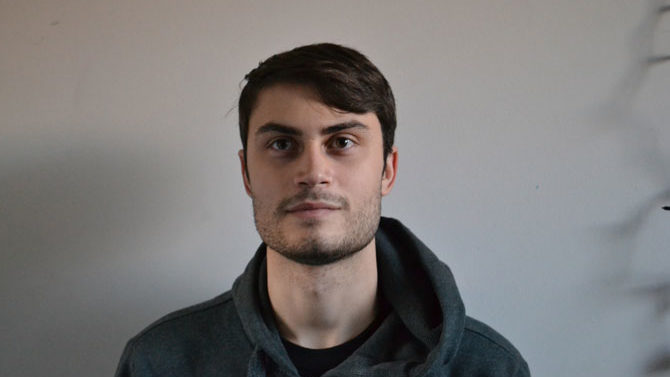 NOW, THAT’S WHAT I CALL MUSIC!: Athens musician JJ Posway (Scooterbabe) just released a new, self-titled album from his experimental project Aprotag. He’s been steadily releasing music under this name since 2012, and the new record features five tracks plus contributions from Richard Hunsinger, former Athens-area chihuahua Dustin Talmadge and an old voicemail message from Connor Dixon. Compositionally, Aprotag has been adept at very long drone-based work, and this is true of the track “October 11th, 1973,” but the album is texturally rich overall. Taken within the context of the full body of Aprotag’s work, it’s practically a gol’ darn pop album. In the album notes, Posway says the record was pieced together from recordings between one and five years old. There also seem to be a bunch of inside references happening here, but if you really need to understand it all, just make friends with him and ask. This is available as a limited edition cassette courtesy of Chicago label Neologist Productions, and you can check it all out via aprotag.bandcamp.com. And you can be a real pal by publicly liking it at facebook.com/aprotag.

GOOFY GREATS: The classic Nana Grizol lineup is heading out on tour next month and winds up in our area just before Christmas. The band—Theodore Hilton, Laura Carter, Matte Cathcart, Patrick Jennings, Jared Gandy and Robbie Cucchiaro—will play Atlanta’s Masquerade Dec. 21 and the 40 Watt Club Dec. 22. It’s been several years since Nana Grizol was an active player on the Athens scene, and its last full-length LP came out back in 2009, so this feels like a homecoming of sorts, and those can be very nice. Nana Grizol released a four-song EP last year named Nightlights I-III + Tacoma Center 1600 to benefit undocumented queer youth, and you can stream that over at nanagrizol.bandcamp.com. For more information, see their label, orangetwin.com.

GOLDEN TICKET: Nuçi’s Space is throwing one heck of a contest, and one super lucky person will skate through 2016 for only five bucks! It’s called the Nuçi+1Pass raffle and costs $5 to enter, but you may enter multiple times for multiple chances. The winner will receive a pass to attend nearly every 2016 show at the Georgia Theatre, Caledonia Lounge, 40 Watt Club, Lumpkin Street Station, The Foundry, Hendershot’s Coffee Bar, Normaltown Hall and Live Wire, as well as tickets to select presentations at the Classic Center and UGA’s Performing Arts Center. There are some restrictions with regard to shows at the Georgia Theatre, but they’re hardly arduous, and any decently organized person will sail right through. The winner can also attend these shows with a guest, hence the “+1” in the name. This is such a baller idea, and I want to personally say kudos to all involved in making this happen. Entries are being taken now at nuci.org/nuci1pass, and you’ve got until 11:50 a.m. on Dec. 17 to enter. Please read the rules and regulations carefully, as well as the frequently asked questions, and good luck!

THE HITS JUST KEEP ON COMING: You may already know drummer Kip Lacy from his residency in local bands Big Morgan and Jack’s Johnson, but he’s also been woodshedding with his electronic pop project, Trip Lacy. He refers to it as “sexy bedroom pop,” and that’s fine as far as that goes. But between that and his naming his debut EP Sex Cells, he may risk selling the whole thing short. Out of the five tracks, only one is kinda weak (House = Hotel?”). The other four are really tasty and have hints of Frank Ocean (“Whatcha Know?”), Babyface (“LNP”) and even Depeche Mode (“8 Months [Over]”). Lacy’s vocal flow is smooth throughout, whether he’s singing or half-rapping, and he’s got a solid grasp of what makes catchy R&B in the 21st Century. It just came out last week, so check it out over at soundcloud.com/triplacy and get updates over at facebook.com/triplacymusic.

GET DOWN: Heavy progressive rock band Liberator released its newest record, Self Help, on Halloween. The four songs here jump between styles so drastically that if you listen to one and think you’ve got them figured out, you’ll just be flat wrong. “Snake Oil” is what I like to call “funky ‘90s” à la Faith No More, “Policia” quite possibly enjoyed a previous life as an MC5 outtake, “The They” is trippy and noodly except for the totally metal chorus part, and “Boundaries” is fairly epic with orchestral aspirations. If Pink Floyd had been better versed in manual labor, they might have considered making this. I really hate to throw this whole record through the “band blender,” where everything is compared with something else, but I’m taking the path of least resistance here. Hopefully, you’ll find it helpful. Liberator will celebrate the release of this new EP at the 40 Watt Club Thursday, Nov. 19, and you can check out more info over at facebook.com/liberatorband.