The Arcs Make a Low-Key Return; The Powder Room to Record New LP 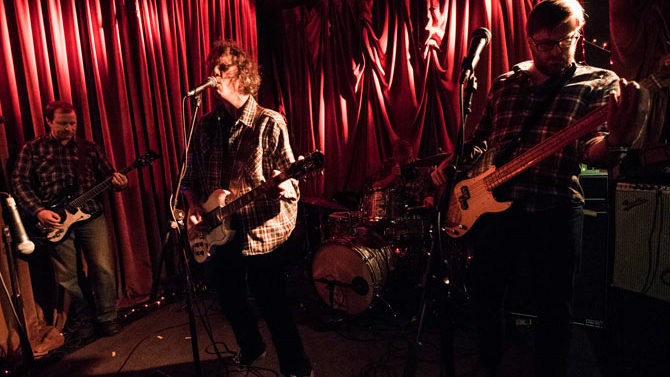 FOUR ON THE FLOOR: Local power-pop quartet The Arcs (not to be confused with the new Dan Auerbach project of the same name) released a two-track single a couple of weeks back, and it’s the first noise we’ve heard from them in more than six years. The band’s members—Ben Spraker, Kevin Lane, Dave Gerow and Brandon Reynolds—are all longtime Athens rock veterans, and though they’ve got no shows currently scheduled, they certainly put some time into this record. Although the recording process was rather mobile—taking place at three houses and two apartments with a Macintosh computer and a collection of begged-and-borrowed microphones—it fell under the umbrella of Express Lane Studio, which, as you might gather, is the clever name for Lane’s engineering outfit. Jason NeSmith (Casper and the Cookies) handled mastering at his Bel Air Studio. Give it a digital spin at thearcs.bandcamp.com, and visit the band at facebook.com/TheArcs.

CAN’T GET YOU OUTTA MY HEAD: The good-luck guys in Athens noise-rock trio The Powder Room are hitting a double this month. It’s been announced that Learning Curve Records, out of Minneapolis, will release the band’s next full-length LP. The group will record that album, the follow-up to debut Curtains, with Kyle Spence (Harvey Milk), and the plan is to have it hit the streets in early 2016. In other news, the group scored a coup of an opening slot, and fans can expect to have their ears blasted when they take the stage in front of shoegaze-y volume-rockers Swervedriver at the 40 Watt Club on Wednesday, Sept. 16. Take a big bite outta learningcurverecords.com, thepowderroom.bandcamp.com and facebook.com/powderroomga.

DUTY NOW FOR THE FUTURE: Individual tickets for all headlining shows at this year’s Athens Intensified festival, happening Oct. 7–10, are on sale. (Full disclosure: I created and direct this event.) The headliners this year are Polaris (the band from Nickelodeon’s “The Adventures Of Pete & Pete”), pop dreamscaper Toro y Moi, multi-genre soulful songwriter Willis Earl Beal, New Orleans bounce music hero Vockah Redu and California garage-’n’-beach inspired rockers Wavves. Each of these shows is accessible via single tickets or full-festival passes; two different tiers, one that includes Toro y Moi and Wavves and one that doesn’t, are available for $50 and $25, respectively. See athensintensified.com for more information and to purchase, and be a part of the conversation over at facebook.com/athensintensified.

STONE ALONE: Tedo Stone will celebrate the release of his newest album Saturday, Sept. 19 at the 40 Watt Club. Also on the bill this night are Athens’ own Grand Vapids and Deep State, as well as New Paltz, NY group Diet Cig. Stone’s newest album is Marshes. It’s already received a dizzying amount of positive press, and for once I agree with most of what everyone is saying. I like its full-on rock guitars, warbly-glammy vocals and overall feel. Individual experiences will vary, of course, but I ignored descriptions of what the music was supposed to sound like and wound up enjoying it very much once I found out for myself. For more information, see facebook.com/tedostone and tedostone.com.

LIFE IS A TIME MACHINE: Songwriter Kristin Hersh (Throwing Muses, 50 Foot Wave) will play the 40 Watt on Thursday, Oct. 1 as part of a tour promoting her new book, Don’t Suck, Don’t Die: Giving Up Vic Chesnutt. The book is a personal memoir of Hersh’s time spent touring, playing and in friendship with the late Chesnutt. She’ll be playing live and doing a signing on this Oct. 1, but there’s no indication yet that she’ll be reading from the book. Chesnutt passed away on Christmas 2009 after overdosing on muscle relaxants. Tickets for Hersh’s performance are $15 and can be had via 40watt.com.