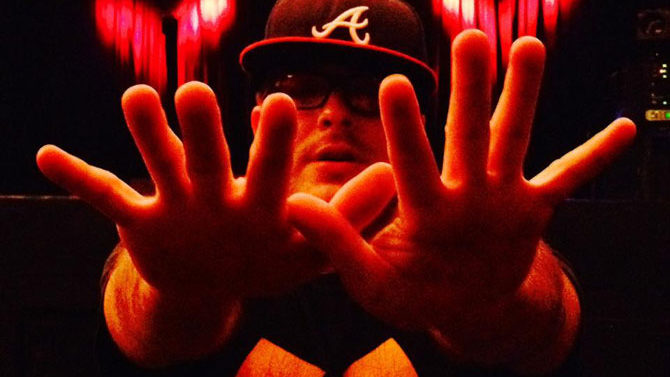 STACKS-O-TRACKS: Louie Larceny has a new album in the can named White Love that’s slated to come out sometime this fall. The 12-track outing was recorded by engineer Joel Hatstat and features a variety of producers, including San Francisco’s Luis I Leon Orellana, aka Mr. Fish, SoHi and ex-Gripe member Jordan Scott. Scott produced the menacingly dark music for the album’s lead single, “White Money,” and if ever someone was going to make the transition from grindcore/powerviolence into hip hop production, this is exactly how you’d expect it to be done. (Check out the Flagpole premiere of the “White Money” video on Homedrone.) The album even has guest vocals by Sienna Chandler (Monsoon) on four tracks and Erica Strout (Motherfucker) on three of ’em. And actually, the entire album is pretty dark-sounding. I listened to it for the first few times in the middle of the night, so that might have something to do with my impressions. In any case, Louie’s effective, deliberate vocal flow is pretty damn unimpeachable. You can check out “White Money” over at louielarceny.bandcamp.com while you spend the rest of the summer sitting on your hands, waiting for the full album to drop.

CLEAR THE DECKS: Montu Miller is starting what could be a pretty neat direct-to-fan merchandise distribution service. He’s calling it the Athens United Merch Table, and the idea is that the table will be strategically set up at different times in different areas around town, including at live shows, and is designed specifically to promote Athens-based artists and their products. Although Miller is primarily associated with the Athens hip hop scene, there’s no real reason his array of merchandise couldn’t include selections from other styles within our community. Have any questions? Drop Miller a line via athfactor@gmail.com, or head down to Live Wire during one of AthFactor’s regularly scheduled beat battles.

CURB APPEAL: There’s more new music from woodshedding beatmaker Wesley Johnson, aka WesdaRuler. He’s been working on a very cool idea he’s calling Yo Athens, where he remixes songs from local artists, giving them the distinct WesdaRuler treatment. So far, he’s completed what he’s calling “flips” (i.e., re-imaginings) of Monsoon, Bel Vas, Dictator and Partial Cinema. Dig it all over at soundcloud.com/wesdaruler.

ALL FLAME: Athens rapper Tru Thought only just released his mixtape The Intermission a handful of weeks ago, but he’s already back with a new collection of songs, The Alliance Rule EP. I’ve not been able to listen yet, but if his work on The Intermission and his more-than-capable release from early 2014, The Tru Era, are any clue, then I know I’m in for a totally solid listening experience. Thus far, the new EP is only available in a physical CD format, which you’re gonna have to find from Tru Thought himself—or maybe at Montu Miller’s merch table—but you can easily stream both his previous releases at datpiff.com/profile/tru_thought706.

NEED-TO-KNOW DEPARTMENT: Some of you may have caught the logo of the quickly-gaining-speed music collective SSMG, sometimes written as Team SS. The initials stand for Super Sport Music Group. Artists under this umbrella include rappers 3ft and Loyal, and all art direction is being handled by all-around good guy and tireless artist, music fan and supporter, Cole Keese.

BITS-N-BOBS: Please welcome Monsoon back from tour when they play the Georgia Theatre rooftop this Thursday, July 23 with Blue Blood and Group Stretching (fka Waterbed), which is a new project from Matt Anderegg (New Wives, Mothers)… Although it feels like forever ago I first told you about it, and the record won’t actually be released until Aug. 14, the live celebration for the new Golden Eels album, Periscopes in the Air, is Saturday, July 25 at the Caledonia Lounge with Live Well and Still, Small Voice & the Joyful Noise. Check goldeneels.bandcamp.com for research.