Golden Eels Are Here to Help Athens Slither Into Summer 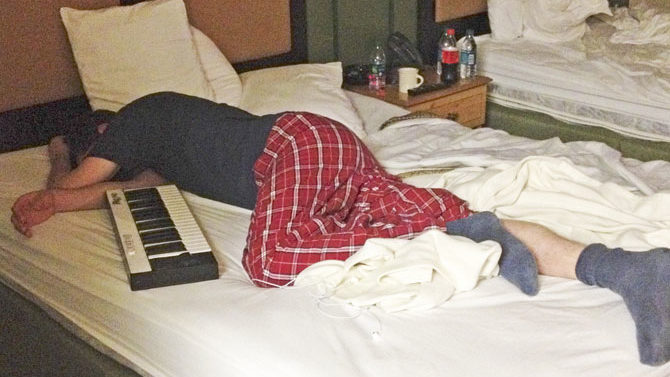 NEWS-N-DEBUTS: Due to another band having already put the name into play, Athens band Golden Brown shall henceforth be known as Golden Eels. Although the group features a crack team of musicians, the whole thing seems to spring from leader Neil Golden‘s brain. You can take a deep peek inside via the Eels’ new album, Periscopes In the Air, which has all the earmarks of a treasured, mysterious garage-sale find. The record’s central artistic statement is melody, melody and more melody. It only veers into weirdness sparingly, and at 13 tracks long, it’s more than enough material for the coming summer season. The band also includes Andy Pope, Taylor Sproull and Creston Spiers. Periscopes features contributions from Helen Rhinehart, Doug Stanley, Kyle Spence, Stephen Keown and Neil’s dad, Lyman Golden. It’s available online at goldeneels.bandcamp.com and is soon to be on iTunes, etc. A vinyl release may happen in the coming months, which should coincide nicely with the band’s planned return to the stage sometime in July.

TUNE IN, TURN ON: Fresh on the heels of his newest mixtape, Loyalty, Athens rapper and producer Yung C.U.Z. is spreading the word about his Internet TV program with renewed enthusiasm. It’s called “#RNTV,” and he used to live-stream it every night but now mostly does Sunday through Wednesday. With the show, Yung C.U.Z. gives airtime to underground hip hop artists and up-and-comers. When I asked him about his motivation for undertaking this potentially exhausting endeavor, he told me: “It is tiring, but before I started rapping, I wanted to be a producer. I like hearing other people’s music and helping out with whatever I can. I also make cover art for most of the artists on the show. I just looked at it like, [there’s] too much talent in my city for no one to be lending a hand or trying to get to know every artist, instead of just some.”

The vibe is like hanging out in a rec room or something listening to records with friends and gettin’ loose. “We don’t discriminate,” he says. “I have been that artist trying to get heard, so I know how it feels. That’s why I started ‘#RNTV’: for the unheard voices.” If you’re looking to get music played, drop mp3s to rntvmusicshow@gmail.com. If you’re a local artist looking for an on-air interview, drop him a line about that, too. “#RNTV” broadcasts via Ustream, and each show is archived there, with most making their way to YouTube, too.

RAISING HOPE: Hope for Agoldensummer continues to gather steam. This month, Claire Campbell will play a string of solo shows in Tennessee, South Carolina and Georgia with Kyshona Armstrong. The pair will play Decatur venue Kavarna on May 23, and a living room show in Athens on May 24. For details on each, and ticket sales to the living room show, see hopeforagoldensummer.com. Admission is $7, and each show is all-ages. In other news, Hope is crowdsourcing fan photos and video footage that folks may have shot during their recent tours. They’d like to use this material to compile music videos, so if you’ve got anything and are willing to share, drop them a line via hopeforagoldensummer@gmail.com.

DO YOUR PART: In honor of his wedding, Athens musician Jared Hasmuk, aka Rev. MC Hatchet (Dictatortots, Free Mountain), is hosting two benefit shows for Nuçi’s Space. The first happens at the 40 Watt Club on Thursday, May 14 and features Scott Low and the Southern Bouillon, Daniel Hutchens, The Powder Room and several others. For a total door cost of zero dollars, you’ll certainly get more than your money’s worth. Be sure to throw some donations toward Nuçi’s while you’re there, because that’s the point of this whole thing. The next night’s event will happen at Nowhere Bar and will feature Fenris Wolf, S.M.O. and Deacon Brody. This show is not free, but likely won’t be more than a few bucks.

CONFERENCE CALL: United Group Of Artists Live, the folks behind the Athens Hip Hop Awards, will host the first Athens Hip Hop Music and Film Conference at the Caledonia Lounge on Saturday, May 16. In addition to disseminating information about the music business and hosting discussions on its various aspects, there’s a competitive side to the event. Hip hop producers, MCs and songwriters are invited to submit their music and videos. A total of nine winners in three categories will be showcased at the event. Each entry costs $25, and competitors will be in the running for a reported $500 in prize money, plus 30 days of free promotion via UGA Live. The schedule for the night has doors at 9 p.m., followed by a film screening, the music video competition, a music panel, the producers’ battle, the song battle and an open-mic and afterparty. For more details, see ugalive.com.