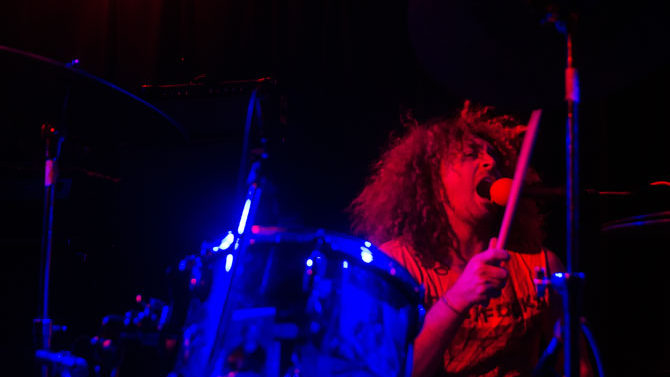 SING OUT: Athens hardcore veterans Harsh Words camped out for three days in January with engineer Mike Albanese (Cinemechanica), and the resulting album, Plague Days, is now available for public consumption. As expected, song lengths range from 36 seconds to a relatively epic one minute, 40 seconds. Albanese’s more than competent hands did a great job of bringing out the subtlety and nuance of the band, which is often lost in a live setting. Take a few minutes and clean your ears over at harshwordsathens.bandcamp.com.

TWO FROM TUESDAY: Although only two tracks are streamable right now, the new album by El Hollín came out a couple of weeks ago, and I can’t wait to hear the whole thing. It’s titled Una Tuesday, and if the band was only gonna make a couple of tracks available, it sure did a great job by letting “The Last Unicorn (America)” be one of them. It’s quiet and requires a couple of listens to realize its beauty. The album was recorded by Bob Hay (Squalls, Jolly Beggars) and mixed and mastered by Nesey Gallons. This is the first release by El Hollín since Holey Smokes (2013), itself an incredible statement of artistic dedication, and all signs show it to be another great outing from one of the most perfectly realized musical projects from Athens in the last decade. Listen in at elhollin.bandcamp.com.

GET ‘EM NOW: Tickets are on sale now for of Montreal’s show at the 40 Watt Club Mar. 5—that’s only a few weeks away, and it will assuredly sell out. They’re a totally reasonable $13 and can be purchased from 40watt.com. The band’s newest album, Aureate Gloom, will be released the same week. In other news, for which I welcome accusations of burying the lede, opening act Yonatan Gat is a must-see. The former Monotonix guitarist crafts tunes that are both complete head trips and fully executed rockers. Freed from the expected outlandishness of his former band’s live performance, he nevertheless remains an entirely physical showman who will no doubt blow some minds here. Ruby the Rabbitfoot opens, and her star has risen so much over he past year it’s probably only a matter of time before her own shows are as anticipated. So, don’t be a goof. Show up on time.

ANOTHER WEEK, ANOTHER SLING: The Slingshot Festival‘s education initiative, Gizmo, is off to a roaring start and has already wrapped a couple of different projects. Its next event happens at Nuçi’s Space over two Saturdays, Feb. 21 and 28, with each session running from 11 a.m.–3 p.m. It’s a music production workshop taught by engineer Suny Lyons, and it’s open to students in grades 9–12. The course is described as “a thorough induction into the world of live electronic music production and recording in a professional setting.” Registration is free, but accepted strictly on a first-come, first-served basis. Check out the full description and registration form at gizmoathens.com.

FREEDOM OF CHOICE: Did you miss your chance to catch Mind Brains last month at its record release show? Are your teeth all a-gnash because you don’t wanna fly to Miami and buy a scalped Neutral Milk Hotel ticket just to catch them? Well, ease up on yourself. The Orange Twin/Elephant 6 supergroup—used here in its proper context, and not just meaning “a buncha people loosely associated”—will play the Caledonia Lounge Friday, Feb. 20. Although described as “Devo on acid,” that nails them too closely to the more mainstream efforts of our friends from Akron, OH, and it’s better to listen to Mind Brains with open ears. They’re playing first, so don’t slack. Headlining this night are Motherfucker, and in the middle is Double Ferrari, who are fresh off tour themselves and should be tight as a clam.