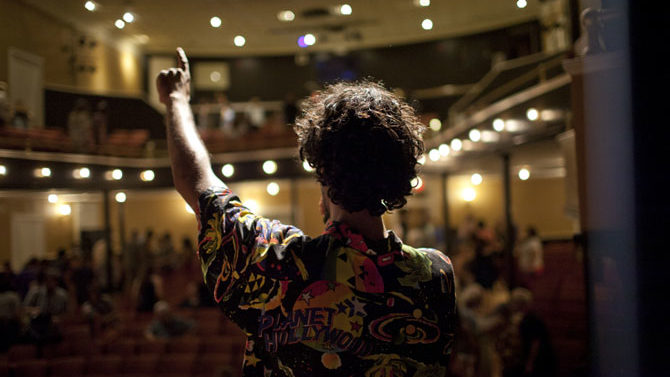 FOR THE KIDS, LITERALLY: The fourth annual Love Notes For Lukas benefit concert will happen Sunday, Feb. 22 at Hendershot’s Coffee Bar from 5–7 p.m. The series supports Lukas’ Fund, whose mission is to improve the overall experience and results for patients of neonatal intensive care units and their families. The specific beneficiaries are Athens Regional Hospital and Atlanta’s Grady Memorial Hospital. The concert is an open-mic event open to all performers between kindergarten and 12th grade. Each performer may play two songs, and while any material is welcome, only original songs are considered for the competition aspect of the event. If you’re interested in playing or need more information, drop a line to Jennifer Fleece via jenfleece11@gmail.com, call 706-247-4135 or visit lukasfund.org.

PLEASE DON’T FEED MY TELEVISION SCREEN: In the spirit of ongoing things going on, Tom Visions (aka Thomas Valadez and Tom(b) Television) is hosting an interactive recording party each Wednesday this month at Go Bar. Exact start times are unclear, so just show up after 9 p.m. and you’ll be OK. The idea is that various collaborators will sit in with Visions and record “improvised compositions based on audience surveys and interaction.” Past and future accomplices include members of Cult of Riggonia, Smokedog, Magd, Lip Geration and more. For the uninitiated, check out Visions’ latest album, Lost In Space (On Earth), over at tombtelevision.bandcamp.com. It’s totally worth the time, even if you decide it’s just too damn cold to go out.

THERE’S SOMETHING IN MY EYE: The gorgeously understated new album by The Tropique came out a couple of weeks ago. If you were wondering what to do with the rest of your winter, well, here ya go. Titled Delineations, it’s largely piano- and guitar-driven and markedly more somber than last year’s Between the Ether & the Unseen. Written and performed by songwriter B.T. Dudley, the record hits that weird spot where it’s utterly heartbreaking, yet entirely vague, so any elicited emotional reaction is one the listener offers up as opposed to one the record imposes. Pull she shades, dim the lights, lie on the floor and head to thetropique.bandcamp.com.

EXTENDED: The third annual Athens Hip Hop Awards ceremony has been rescheduled for Mar. 7 at the Morton Theatre. Although voting was originally scheduled to end Feb. 10, as of this writing the ballot is still live, so head to chocolatecitylive.com to cast your votes. Tickets for the event are $15 for general admission and $25 for VIP access, and are available at the aforementioned link.

FUNK TO FUNKY: Because it’s impossible lately to go a week without news from the Slingshot Festival camp, here’s this week’s edition. There’s going to be another Slingshot happening in Athens, Greece simultaneously with the one in Athens, GA. The Greek counterpart is headed up by visual artist Antonis Kourkoulos, and the twin events have plans to stream performances back and forth to their sister audiences. It’s dubbed “Athens to Athens,” and the dates are Mar. 26–28. All in all, a very cool concept. For more information, see slingshotathens.gr and slingshotathens.com.

TONIGHT’S THE KNIGHTS: The Performing Arts Center at UGA is presenting three appearances this week by New York-based orchestral collective The Knights. The chamber ensemble was founded by brothers Colin and Eric Jacobsen and, since its early days in the 1990s, has grown to become a most respected outfit. The first performance is Tuesday, Feb. 10 at noon at the UGA Chapel, the second is at Hendershot’s Wednesday, Feb. 11 at 7:30 p.m., and the third is Thursday, Feb. 12 at 8 p.m. at UGA’s Hodgson Concert Hall. Tickets for the UGA performances range from $25–52 and can be purchased at pac.uga.edu.

CALLING ALL CARNIES: The Carnivale of Black Hearts will present the Tinderbox Circus Sideshow and Blue Moon Circus Mar. 5 at Max. As usual, the Carnivale will host an assortment of entertainers applying modern twists to the classic circus and sideshow tradition. This is where you come in: Auditions are being held now for those wishing to showcase five to 10 minutes of their talent. Ideas include “vaudeville, burlesque, dance, circus arts, comedy, theater, music, puppetry, sideshow stunt, odd talent, magic, spoken word, etc.” If selected, you might be considered to perform at the annual Carnivale event in October. Drop a line to blankbooking@gmail.com, and keep in mind the deadline is Feb. 21.