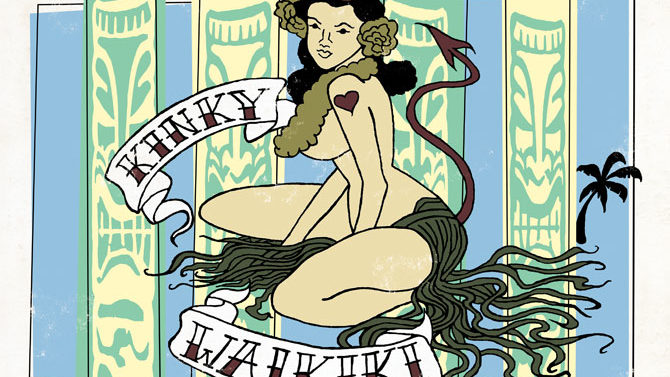 Life’s A Beach: There’s surf music, there’s beach music, and then there are the hazy, blissful, relaxing sounds of what I like to call tropical music, music characterized by Hawaiian, Caribbean and South American melodies and rhythms—even if you don’t know it, you’d recognize it. Wrap up what may be the final really warm days of the year Sept. 20 at Hendershot’s Coffee Bar, where Kinky Waikiki will spin its newest album for your listening pleasure. After that trip around the islands, you’ll be treated to a live set by this smooth band of retreat-seekers. So, you know, walk, don’t run. But be there all the same.

Wah-Wah-Wah: Remember back in July when Atlanta’s Rock*A*Teens reformed and jazzed audiences at select shows, including one here in our town? Athens was always the band’s second home, and it was nice to have them back. In addition to the reunion shows, the group announced that Chunklet Industries would be releasing a limited edition double LP named A Major Motion Picture, which collected 22 tracks recorded live at Atlanta’s Star Bar between 1998–1999. Except for the copies that were sold on the road, this album’s been waiting to drop, and that’s exactly what it’ll do Saturday, Sept. 20. You may preview and purchase at chunklet.bandcamp.com.

Stay Difficult: Michael Lauden (Scab Queen) is one of the hardest-working and most creative people involved in Athens’ explosive experimental scene. Several weeks ago, he tipped me to his inclusion on an international noise compilation titled Martyred Heretics, released by the Mustard Relics blog. Lauden describes his track, “White Forest,” as “the first half of a dual audio/visual release,” and the audio is as disturbingly agitating as anything I’ve heard recently. (I mean that as a compliment, as Scab Queen has consistently pleased my ears.) The track is layered with field recordings and live in-studio playing, and was all performed, recorded and arranged by Lauden and mastered by Terence Chiyezhan (murk daddy flex). The comp doesn’t officially come out until Oct. 13, but it’s all right there for your streaming (dis)pleasure at mustardrelics.bandcamp.com. Follow along with Scab Queen via scabqueen.bandcamp.com and facebook.com/scabking.

Little By Little: By the time you see this, there will be just over a month left to help fund a new release by Honeychild via Indiegogo. The specific categories of supporter rewards are slightly more expensive than campaigns of a similar nature. ($15 gets you a digital download, $25 a copy of the CD, etc.) This suggests in pretty clear terms that this campaign is not simply a pre-order situation but a call for real-life arts patronage, which is exactly what it is, no matter how many of you howl and moan that direct-to-artist support is some form of panhandling and, dammit, why aren’t they suffering more? They’re artists, right? They should be starving! But I digress. The name of the new album is Surrender, and it’s reported by the band to thematically run the whole course of human emotions. In their own words, “The thrill, the depression, the joy, the jumpiness, the awakening, the delusions, the desire, the dread. The waiting, the wondering, the bliss of not knowing, the madness of not knowing and the surrender to what is.” OK, so it’s not exactly Cheap Trick, but I was totally taken by Honeychild’s debut, American Beach, and expect no less from this one. For more information, see facebook.com/Honeychild.

Calling All Contras: Those attending the Athens Folk Music And Dance Society’s Third Saturday Contra Dance on Saturday, Sept. 20 are in for a special treat. Renowned dance caller Janet Shepherd of Chattahoochee Country Dancers will be calling the dances in front of the Atlanta-based Peavine Creek String Band. The dance takes place at Memorial Park. If you’ve never attended or participated in a contra dance, it’s a real—to steal a term—hoot, and also a definite workout. It’s open to everyone at any skill level, and instructions are given before the start of the event. It starts at 8 p.m. and you can find out more via athensfolk.org.