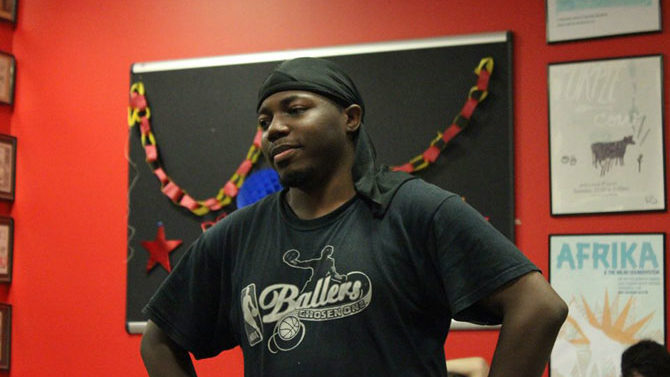 The nature of this column often dictates that I takes sides in matters of taste, talent, etc. Rarely is it appropriate, in this limited forum, to take an actual position on the rightness or wrongness of a situation. However, after the quick dismissal of longtime Athens hip hop impresario Akeeme Martin from his newly appointed position as WUOG 90.5 FM‘s general manager, there are a few things I want to say.

Because I’m not privy to the information surrounding Martin’s reported lack of student enrollment status at the student-run station, nor his reportedly inappropriate actions on behalf of the presumably in-limbo WorleyFest, I won’t speak to those things.

What I will say is this: During his 10-year tenure at the station, Martin galvanized a regular audience and pretty much singlehandedly created a go-to space on the airwaves for hip hop in Athens. He was the only WUOG staffer who was easy to contact, and was always responsive and enthusiastic to press inquiries. Further, listeners could count on hearing the “Halftime Hip Hop Show,” even when the rest of the broadcast day was staticky or off the air.

Martin put real action behind his well-spoken love for WUOG. If it is so troubling to the WUOG constitution that Martin, the most dedicated of the dedicated, wasn’t always an “enrolled student in good standing,” then it’s time for that constitution to be changed, its charter stripped of the “student-only” designation and for WUOG to make the transformation to being a true community station.

While there have certainly been others in the past decade who gave their all to WUOG, the fact is that Martin gave more. If a student-run station can’t be reliably and thoughtfully programmed, participate healthily in both community outreach and promotional activities and make a meaningful mark outside the campus confines—all of which Martin did—then it’s time to rethink its status as a student-only forum.

Again, I’m not saying Martin’s dismissal was egregious if, indeed, rules were broken. I’m saying that if the best of WUOG’s talent isn’t coming from the actual student body, then it’s time for a serious overhaul of the station’s constitution, organizational structure and standards of practice.

Martin’s most recent broadcast was uploaded June 19, and can be found, along with others, at mixcloud.com/akeeme-martin.

14,000 Seconds Over East Campus Road: This season’s edition of the Georgia Museum of Art‘s “Museum Mix” program will feature Michael Lachowski spinning records from the bands that inspired Pylon. Lachowski was, of course, that group’s bassist—not to mention one of the premier DJs in town back when that craft was still a pretty underground art in our guitar-loving burg—and now works in public relations for the museum. This event is coordinated in tandem with “Shapes That Talk to Me: The Athens Scene, 1975–85,” currently on display at the museum, and presented by Art Rocks Athens. Attendees can expect to hear cuts from artists such as Kraftwerk, Pere Ubu, Cabaret Voltaire and more. Save the date of Thursday, July 24 and remember it’s free, open to the public and runs 8 p.m.–midnight.

Wot’s… Uh, the Deel?: Jacob “Jay-Cub Lake” Deel reports that he’ll be playing a full-band show with his project Cottonmouth Wednesday, July 30 at Go Bar to celebrate Parks Miller‘s (Muuy Biien, Dip) birthday. But why do you care, right? Deel has steadily been crafting this thing for, well, a really long time. The band now consists of Deel, Robbie Rapp (Muuy Biien), Josh Evans (Muuy Biien), CJ Brown and Benjamin Taylor. While the band will record a new EP at The Glow Recording Studio with engineer Jesse Mangum in August, there will also be an entirely new full-length, Man-Cub, uploaded on the 22nd of that month. I’ll tip you to its location as soon as that happens. For the uninitiated, or even you old hands, delve into Cottonmouth’s ultra-wide weirdo hip hop/noise/squelch canvas at jay-cub.bandcamp.com.

Notes From the Würmhole: There was a phenomenon that happened toward the middle-end of the reign of the mighty SST Records. You’d head to the record store, pick up an album by a band you’d never heard of and buy it, simply because SST was Black Flag‘s label, so how bad could it be? Then you’d sit with your mouth agape as you realized you were listening to a demo tape by some band label owner Greg Ginn was friends with, and he really dug their high-pitched guitar skronk and verse-chorus-verse sub-fuzz mid-tempo garage-punk-with-a-little-jazz-thrown-in mix, because it was the 1980s. That’s exactly the same experience I just had with the debut album from The Dry HuMps. Ignoring (permanently) the group’s low-grade name and superfluous capitalization, the facts are that the band is composed of Mateo Sizzler, JB Bradberry, Justin Oxbolt and Holland Tanner. The album landed on iTunes earlier this month, but you can stream pretty much all of it via  reverbnation.com/thedryhumps. An official release show will happen Aug. 9 at the Caledonia Lounge, where The Dry HuMps open for The Honey Sliders, who will also be celebrating a new album that night. Happy hunting!