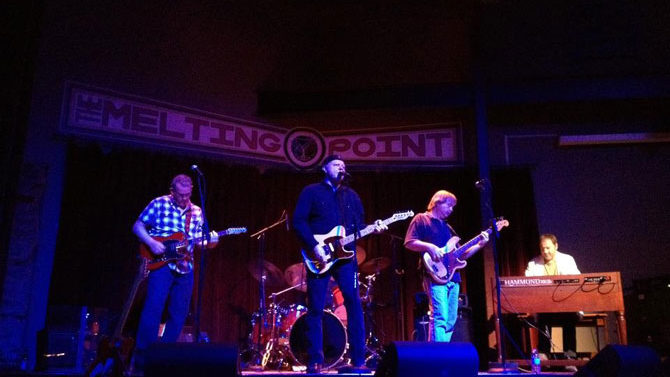 It’s AthFest week, y’all! It’s with a rare sense of brash positivity that I want to encourage everyone to stay hydrated, wear some damn sunscreen and have as good a time as humanly possible. If you’re a local, please remember that we’re gonna have a lot of visitors this week, so be a pal and share your town with ‘em. If you’re visiting, please remember that while you’re taking in our arts and music scene—and, let’s be honest, bar scene—we love our visitors, but this is our home. If we promise to treat you like our special guests, we’ll accept your promise to act like good ones. Can you feel the love on this page? Here’s the scoop for this week…

They’ve Got a Fuzzbox, and They’re Gonna Use It: OK, so for some reason I’ve been made privy to a private stream of the new album by Cancers, Fatten the Leeches. Although it’s not due to be released until Sept. 16 on the newly formed Kandy Kane Records—run by Cancers member Lenny Miller—I’ve been able to stream it at will all week long. The guitars and drums are super-loud but buried in the mix, while Ella Sternberg’s breathy vocals hold it all down from on top. It’s full of pop hooks and that almost-sing-along quality that elevated Hole, Lush and Veruca Salt into spokespersons for this sound. Oh, who am I kidding? This record is so ‘90s it just rocked the vote and reelected Clinton. It just drank a bottle of OK Cola. It’s excited about this new sport named snowboarding it’s been hearing so much about. All kidding aside (except I’m not kidding), it’s a really good record, and you can’t wait for it to actually come out. To hear Cancers’ previous work, head to kandykanerecords.bandcamp.com.

Leave Your Good Job in the City: Libby Rose of live-music website Live & Breathing just announced the inaugural occurrence of Wildwood Revival. The event, taking place July 19, is the first in what is hoped to be a series of small, Americana-focused events. Of particular interest to Athens people are the facts that Wildwood Revival takes place at Cloverleaf Farms in Arnoldsville, and that the first instance features a homecoming performance by The Whigs. Others slated to perform include The Whiskey Gentry, J.P. Harris & The Tough Choices, Rolling Nowhere, The Deslondes and The Banditos. In keeping with the finely curated aspect of the event, attendees will be served a full-on “farm-to-table” dinner at 6 p.m., and camping is allowed and encouraged. Reservations are necessary, though, and if you’d like to sleep in a tipi, that’ll run ya 50 bucks. Tickets for Wildwood Revival are $38 per person for the day and can be found, along with lots of other good information, over at wildwoodrevival.com.

Get Well Soon: As reported on Homedrone a couple of weeks ago, longtime Athens musician Rick Fowler suffered a minor stroke, forcing him to cancel his appearance at AthFest and all gigs for the next several months. He’s currently recovering steadily and has even been posting to social media, reassuring his friends and family that he’s on the steady mend. As reported, Fowler had been “fighting dizziness, bouts of double vision and facial numbness” for the past couple of years but couldn’t afford to investigate these symptoms past initial doctors’ opinions. He was finally able to do so at the beginning of May when he obtained insurance through the Affordable Care Act. The plan is to heed the warning of the minor stroke and prevent a major one from happening. All of us at Flagpole are pulling for you, Rick! Take good care, and we’ll see ya onstage again real soon.

50,000 Watts and Almost as Many Venues: WUOG 90.5 FM plans to host the inaugural WorleyFest Oct. 15–19, and it’s a hugely ambitious project. Named after the station’s biggest fan, Richard Worley, the six-committee organizing body has plans for several events surrounding live music, fashion, art, film and comedy. Events are to happen both on and off campus. For anyone who’s been following the news surrounding Georgia State’s student-run station, WRAS 88.5 FM, it’s no secret that college radio needs all the love, support and attention it can get. To this end, I totally applaud WUOG for this effort and can’t wait to see the programming they create for it. For more information, drop a line to worleyfest@wuog.org.