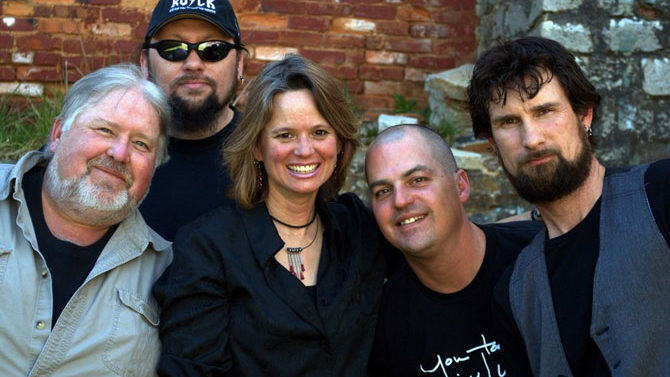 Um, What?: The Georgia Music Awards, now in its third year, takes place at Atlanta’s Buckhead Theatre Saturday, June 16. Founded by North Carolina entrepreneur Omar McCallop, the GMAs follow in the footsteps of the Carolina Music Awards, and will be followed by the Florida Music Awards later this year and the Tennessee Music Awards in 2015 or ’16. Basically, it’s like a diploma mill for bands and artists no one has ever heard of. Nominees for the awards are submitted by fans (a.k.a. family and friends), and far be it from us at Flagpole to impugn a system where fans have an effect on the outcome of a music awards show. That said, the GMAs’ web presence is as unnavigable as its sense of purpose is blurry. I got a headache just checking it out. Try for yourself over at awardshownow.com/gamusicawards. While you’re there, consider throwing a vote to Athens hard-rockers Scarlet Stitch (scarlet-stitch.com), who are nominated in the “Best Rock Band” category, and/or The Athens Band, nominated in the “Youth Rock Band” category, even though half of the group’s members are of voting age. Both bands were nominated for the same awards last year, too. So, you know, fingers crossed and all that, right?

Swap ’til You Drop: This year, Athens joins the growing number of cities—including Portland, OR, Lafayette, LA and Charleston, SC—that participate in BandSwap, a program that pairs up-and-coming bands from each host city with a group from the organization’s home base of Fort Collins, CO for a blowout show in the band’s hometown. In our case, said show will happen at the 40 Watt Club in September. In addition, participating bands will travel expenses-paid to Colorado for the BandSwap Homecoming festival this fall. Throughout the process, BandSwap will provide networking and educational opportunities, as well as marketing materials for each event and a sizable stipend for each band member. Flagpole has been tasked with choosing this year’s Athens BandSwap band. To throw your group’s name into the ring, visit Homedrone, where you’ll find further details on how to apply. [Gabe Vodicka]

Pool It: The Hut on Baxter Street, along with the Athens-Clarke County Leisure Services department, is hosting a special Memorial Day show at Memorial Park. (Where else, right?) Featured performers are the Kate Morrissey Band with guest Louis Phillip Pelot. They will play next to the swimming pool from noon–3 p.m. (the pool itself will open from 12:30–5:30 p.m.). It’s free to attend and $1 if you want to swim, and take some more cash, too, for concessions provided by The Hut. For more information, drop a line to coordinator Mo Lutz at chefbrucelutz@gmail.com.

Step Right Up: Athens band Gumshoe released its debut album earlier this month after spending two years recording and undertaking a successful fundraising campaign in April to manufacture it. It’s titled The Bad Route Down, and is reported to contain the work of “23 of Athens’ finest musicians.” It very well may, but since there’s no credits listed at gumshoetunes.bandcamp.com, I can’t tell you who they are. The core of the group, though, is Andy Dixon, Paul McHugh, Rob Kelleher, Aaron Phillips and Jamie Coulter. While the CD and digital download versions are available as we speak, the vinyl LP has reportedly been delayed until July. Musically, the record spreads itself thin over a schizophrenic landscape of troubadour-ish, country and western (with a particularly Southwestern flavor) and carnival-barker rhythms. Basically, it’s so full of split personality that Tom Waits seems reasonable in comparison. There is, however, one song that is undeniably great. Head to the link above and listen to “I Have Been Drinking” before anything else.

Southern Hostility: For the Vulture will play a special show in tribute to ANTiSEEN guitarist Joe Young at the Caledonia Lounge Saturday, May 24. The band will only play songs by ANTiSEEN that night. Also, special for this show, For the Vulture is expanding its lineup to include honorary member Forest Hetland on bass. The rest of the band is composed of Zack Hembree, Chris Duran, Will Eskridge and Andy Hollingsworth. ANTiSEEN began in 1983 in Charlotte, NC and Young was a founding member. He passed on Apr. 30 at age 54. If there’s any band in town ready and capable to pay fitting tribute to Young’s relentless buzzsaw guitar sound and ANTiSEEN’s aggressive, no-holds-barred demeanor and presentation, it’s For the Vulture. Also on the bill this night are Utah—playing its final show—and Savagist.

Song(s) For a Future Generation: The live rock shows coordinated as part of the Art Rocks Athens retrospective series of events happen this weekend (other events are covered in our cover story), Friday, May 23 and Saturday, May 24. The first show is at the 40 Watt and features The B-53’s, Vanessa Hay (Pylon), Michael Guthrie, Kevin Dunn and a very special reunion by Is/Ought Gap. Saturday’s show happens at the Georgia Theatre and will feature Ola Moon (which features Cindy Wilson of The B-52’s and Dana Downs), Armistead Wellford & Friends, Oh-OK, The Squalls and David Barbe & Friends. Doors open at 8 p.m. each night. For more information, see artrocksathens.com.