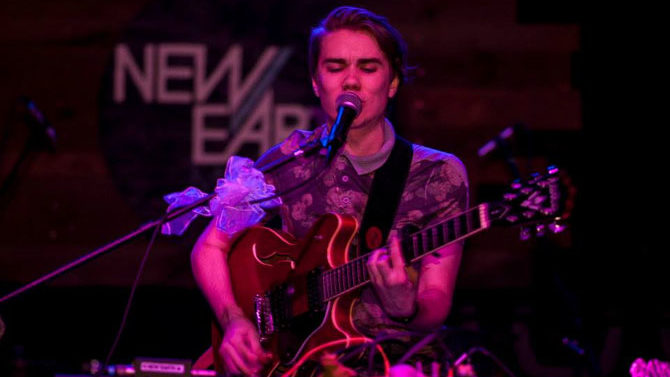 Fly Into the Sun: A handful of of exceedingly creative former and current Athenians are participating in a new experimental podcast named ROAM. Its core coordinators are David Matysiak (ex-Jet By Day), Mason Brown, Devin Brown and Jordan Noel. The concept is thus: A monthly sound collage is produced via a new set of contributors each time, and each person’s contribution fits within an overall theme. The focus of the newest edition, released earlier this month, is “family.” A quick dig through the archives reveals several names many will recognize, including Madeline Adams, Valentina Tapia (Shantih Shantih), Orenda Fink (Azure Ray), Patrick Fadely and more. If anything says “headphone weather,” this does. So, get on it. Head to roamtransmissions.tumblr.com and thank me later.

Return of the Prankster: Although the band’s name—and, often, its musical executions—always implied a core of ridiculousness, I was always a big fan of Smokedog. The group, composed of Thom Strickland and Jason Jones, was like a noisy encyclopedia of rock and roll tropes, pop-isms, unabashed yet sacrilegious hero worship and a hell of good time. Missed ’em in their early 21st Century heyday? Well, punter, catch the reunion happening at Max Saturday, May 3. There’s no word on whether the Brooklyn, NY-based Jones will be on board for this, but what we know for a fact is that Strickland will be joined by Shannon Perry and Michael Pierce, who are ex-members of Macon, GA band Ghost Train. Also on the bill are local rockers Thunderchief and Columbia, SC band Space Coke, which my forgiving side is inclined to believe is a reference to soda pop, but who knows?

Is This Thing On?: The Internet has provided well this week, and our biggest blessing comes from former Athens OnTV producer Theodore Radford. From 1994–1998, Radford produced many shows for the cable-access channel, and it’s a real treat to be able to go back and see some of them. Most contain members of the Athens music scene, too such as “Box Office Banter” with Paul Trudeau and Ballard Lesemann, “Cult Classic Theatre” with Jim Stacy as costumed horror host Dr. Crepula and music interview show “Soundcheck” (posted videos include Vic Chesnutt, Drive-By Truckers, Man or Astro-man? and Guadalcanal Diary) hosted by Kitty Snyder. The footage of the Truckers was shot at the late, great Hi-Hat Club, and is alone worth all your clicks. There’s also an episode of the alternately loved and reviled “Spy Girls,” hosted by scene enthusiasts Misty Herrin and Kristin Garrison. Head to youtube.com/theosoundcheck and enjoy yourself thoroughly.

New Zoo Review: The paragraph above dovetails nicely into something I’ve wanted to mention for weeks but haven’t had room for. New for the digital age is Athens Public Access, which you may stream via a Roku streaming player, a device running an Android operating system or online. A live stream happens every day from 8:30–3:30 a.m. There are loads of music videos, including clips from Kate Morrissey, Madeline, of Montreal, Bubbly Mommy Gun, Shaved Christ, Yung Ralph, Elf Power and many more. There are also lots of videos of recent local events and even original programming, like the game show “Dollars and Sense,” which is sort of a no-budget version of “The Price is Right.” There’s also a compilation of the animated show “Dank Sandy’s,” which is way funnier than anything named that deserves to be. There are too many Athens folks to name with regard to all this, but let it be known that it’s totally homegrown and I’ve had it on Roku for months. So, spend a day catching up and then keep watching for updates. For more info, see athenspublic.com and facebook.com/athenspublic.

Press Here: OK, I admit full-stop that I’ve got a soft spot for Patrick Brick‘s project, Futo. Reconceived over the past year or so from its initial identity as an acoustic project, it’s now solidly in the synthesizer-keyboard-dance-pop category. It’s not that Brick’s previous work was weak—far from that—it’s just that I think his songs are so much better realized this way. Apparently, he agrees, given his newest full-length, Dog Dreams. There are still hints of the old sound (see “Pocket Change”), but it’s still way more Pet Shop Boys than Peter, Paul & Mary. Dig it the most over at futo.bandcamp.com.