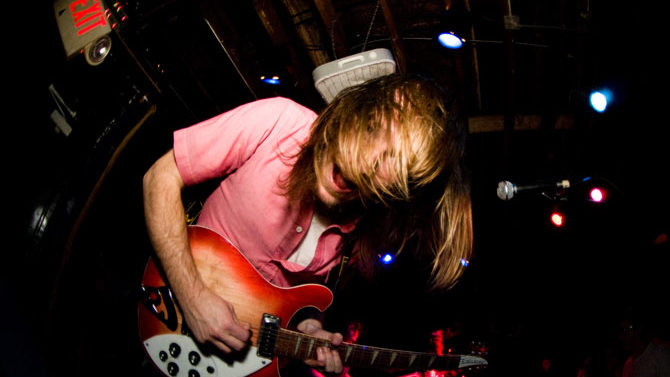 All That Remains: Athens instrumental band A. Armada built up a decent amount of speed before imploding a few years ago. The post-rock ensemble was always a little more “rock” than “post,” and its atmospheric compositions always swung a little closer to earth than noted influences Appleseed Cast and Explosions in the Sky. Although it’s been dormant for years and likely to remain so, the band recently dug through its archives and released the six-track Never Come Down From the Mountain. The pieces were culled from A. Armada’s final recording sessions a few years ago. One tune was recorded by Andy LeMaster at Chase Park Transduction, and the others were tracked at the band’s practice space. It’s an interesting way to bookmark a band’s existence—that is, with what is essentially a demo. All in all, it’s not a bad reminder of what Athens sounded like circa 2010, and you can hear if over at aarmada.bandcamp.com.

Hit the Switch: The ongoing activity surrounding the ramping up toward this summer’s Art Rox Athens event series, also known as Art Rocks Athens, now includes an opportunity for you to send in a 30-second video. If you’ve got a memory or feeling about the Athens art and music scene from 1975–1985 (e.g., How did it make you feel? How did it affect your life? What does it mean to you now?), then go ahead and record it and send it to videos@artrocksathens.com. Videos should be less than 10 megabytes in size and in MP4, OOG, MOV or H.264 formats. For more information, see artrocksathens.com.

To Your Health: This year’s BreastFest happens Saturday, Mar. 29 at Little Kings Shuffle Club. Since its first instance in 1997, the annual event has worked hard for breast cancer awareness and fundraising and generally offered a pretty good lineup of live music in the process. This year’s event features Marie Davon; Sara O’Brien and Betsy Franck; Jack Logan and Scott Baxendale; Shonna Tucker and John Neff; Barry Marler (Dreams So Real) with Darrin Cook and Jamie Derevere; Bryan Howard (The HEAP) with Matt Williams (The Granfalloons), Danny Hutchens and Eric Carter; DJ Keis; and Jim White with his daughter Willow Martin. Notice a common idea running through most of those? They’re largely duos, owing to this year’s BreastFest theme, “What a Pair.” There will be a silent auction with items ranging from show tickets to a watercolor painting of Patterson Hood by Michael St. George, lots of food from local merchants, a kid carnival, representatives from our local St. Mary’s Hospital speaking about breast health and more. BreastFest was founded in memory of Tyanna O’Brien by her daughters, and in the last five years it has raised and donated over $100,000 to St. Mary’s. The mammography waiting room there will be dedicated in honor of O’Brien on Mar. 28. For more information, see facebook.com/breastfestathens and breastfest.org.

Groove on the Grass: Ashford Manor‘s Concerts on the Lawn series returns to Watkinsville Friday, Mar. 28 with a very special edition featuring roots legend Randall Bramblett along with Atlanta a cappella group Hair of the Dog and former “American Idol” finalist RJ Helton. Attendees are encouraged to bring blankets, lawn chairs and picnics and spread out under the stars. In addition, nearby restaurant Chops & Hops will be donating a portion of that evening’s sales to benefit Project Safe, and folks are encouraged to order carry-out in advance by calling 706-310-1101. Tickets for Friday’s event, which are available at the gate, are $15 for adults and $5 for kids under 12, and all proceeds will go to benefit Project Safe on behalf of Dancing with the Athens Stars‘ Team 6. On a related note, the annual Dancing with the Athens Stars event happens Sunday, Mar. 30 at the Classic Center. Sounds like your weekend is planned. [Gabe Vodicka]

On the Road Again: The always hard-at-work Burns Like Fire has thrown its hat into the ring to be considered for inclusion on this year’s Vans Warped Tour. The contest is run by guitar-string maker Ernie Ball, and you can vote for our heroes over at warped.battleofthebands.com/u/BurnsLikeFire. The band has already responded to those who say that no “good” bands play Warped Tour by saying, basically, that this is your chance to make sure one does. The group, now hot on the heels of its debut release for the Autumn & Color label, has been out of town an awful lot this year already, and is probably going to be on the road a total of six months or more this year. Follow the madness at facebook.com/burnslikefiremusic.

Punk Junk: The hard-to-categorize Katër Mass, generally agreed upon as falling somewhere in the melodic punk/heavy indie categories, will release its new album Circles on cassette tape Saturday, Mar. 29 at the Caledonia Lounge. The bill also features Pale Prophet, Harsh Words and Karbomb. The record release comes courtesy of Pizza Tomb Records and Added Warmth Recordings, and even though I think making cassette tapes of anything is like manufacturing instant garbage, I’m also inclined to side to with nearly anything Katër Mass chooses to do. It would be difficult to understate my enthusiasm for this band and how essential I think these guys’ sound is for Athens these days. And I was saying that long before they included a prank phone call made to me on the new album. Take heed and keep up with their goings-on via facebook.com/katermass.