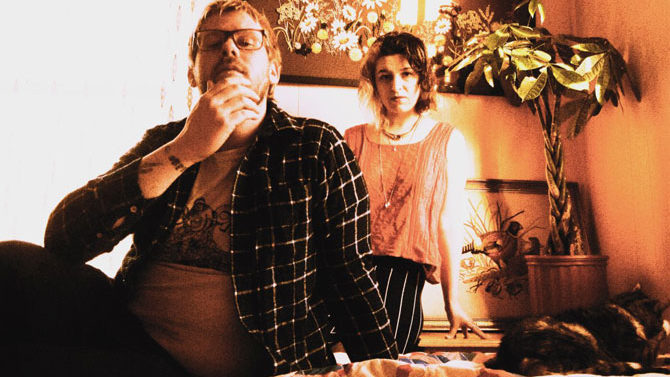 Something Old, Something New: Former Dead Dog member Ella Sternberg spent a good amount of time traveling around over the past two years, but now she’s back in Athens with a new band—and it’s a good one, too. It’s called Cancers, and it will debut at Hi-Lo Lounge Saturday, Mar. 8 with another pretty killer and fairly new-to-town band, Little Gold. In pure 21st Century fashion, the band will have four-song demo cassette tapes available, and if you wanna hear what you’ll be getting into, head to kandykanerecords.bandcamp.com. Cancers is composed of Sternberg and new Athens resident Lenny Miller—who Sternberg makes sure to mention is Canadian, so I guess Cancers can rightly be referred to as “international”—and it works mainly as a duo but picks up friends around the country to play live and record. To wit, after this show, the band will head out west with drummer CJ Frederick and Toronto bassist Luke Stackhouse. If you dig that fuzzy-toned, rockin’ but not too out-there pop sound of the early ’90s, you’ll totally dig Cancers. So, it makes total sense that the upcoming tour will take the group to Seattle to record with Jack Endino, who recorded everything that made Sub Pop famous before so many other people hitched their wagons to the gravy train. Those sessions are for an eight-song, single-sided LP.

Nana’s Got a Brand New Bag: A new four-song EP from Nana Grizol, Nightlights I–III + Tacoma Center 1600, is out now. Nana Grizol’s membership has always been fluid, and this time it’s composed of mainstay Theo Hilton as well as Jared Gandy (ex-Zumm Zumm), Robby Cucchiaro (The Music Tapes), Emily Simpson (Tiny Sticks), Madeline Adams and Laura Carter (Elf Power, Orange Twin). It was recorded by Derek Almstead, and it’s available over at nanagrizol.bandcamp.com. Musically, it doesn’t diverge one bit from the catchy/punky four-chord folk-pop Nana Grizol is known for, so relax. Although downloads are available on a pay-what-you-wish basis, the record is a benefit for the Queer Undocumented Immigrants Project, whose stated goals are to “organize and empower LGBTQ-identified undocumented people, LGBTQ immigrant youth and allies.” So, consider throwing in more than you might normally. For more info, see facebook.com/QUIPnational.

Think Different: Athens radio disc jockey Dwain Segar moved to the Classic City three years ago from New York, and has been steadily promoting smooth jazz—that easy yet contemplative blend of jazz, soul, R&B and worldbeat—here in town ever since. (If you’re unfamiliar with the genre, lemme direct you to a few noted favorites of his—Ken Navarro, Boney James and Brian Simpson—as points of reference.) Segar spins both classic and contemporary tunes on his show The Segar Jazz Affair, which airs on WXAG 1470 AM Tuesdays and Wednesdays 8–11 p.m. and Saturdays 4–7 p.m. He’s bringing his tastes and live promotion to the Melting Point Sunday, Mar. 9 for a night of smooth jazz featuring Atlanta’s Fusion Triangle and poet Hazel Roach. Doors open at 5 p.m., and there will be performances at 6 p.m. and 8 p.m. Tickets are $8 in advance and $10 at the door. The first 50 people will receive a free CD, too. For more information on Segar and his show, see thesegarjazzaffair.com, and to learn more about WXAG—the only African American-owned station in northeast Georgia, by the way—see facebook.com/WXAG1470.

Head to Head: The Skipperdees have a special show lined up for Friday, Mar. 7 at Hendershot’s Coffee Bar. The sisterly duo that makes up the group will play together, but they’ll also play separately as Emily Backus and Catherine Backus. In pure Skipperdees self-effacing fashion, the flyers for the show say, “Whoever Wins… We Lose!” I assure you, though, no one will lose. The folk duo’s most recent album, Some Bright Mourning, was released this past December and can be found at theskipperdees.com.

String Thing: The Cottage Sexual Assault Center and Children’s Advocacy Center is working to bring awareness and participation to the 1BlueString campaign, the object of which is to raise awareness of the fact that one out of six men suffered childhood sexual abuse. The campaign asks that guitarists replace their high E string with a blue string. But where do you get said string? Well, head down to Nuçi’s Space Friday, Mar. 7 from 5:30-7 p.m. and pick up a free kit, which includes a blue string, a guitar pick and a sticker. For more information on the campaign, see 1bluestring.org, and if you feel like performing a couple of acoustic songs at the event, drop a line to sally@northgeorgiacottage.org and sign up.

Hot Hut Flowers: The Hut on Baxter Street is hosting an open mic Friday, Mar. 7 and 14. The idea is that these performances will act as live auditions, so the venue can begin scheduling performers when it opens up its patio as spring breaks. Anyone interested in playing The Hut this spring or summer should take advantage of this opportunity. Drop a line to coordinator Mo Lutz via chefbrucelutz@gmail.com, or call him up at 770-363-4445.