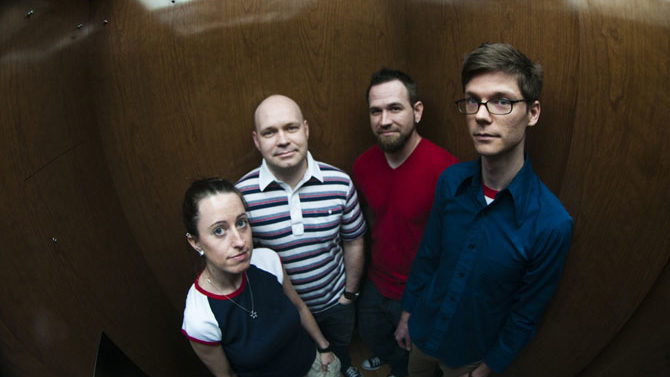 Worth the Wait: Seemingly long-dormant Athens band The Warm Fuzzies have been working up a new album over the past year and have laid down some tracks with Jesse Mangum at his Glow Recording Studio. The title of the new record is Extinction. When I first received notice of these new songs, I gotta admit I hesitated to listen to them, because the band has been way too goofy and silly in the past for my tastes (and I’m still not crazy about their too-cutesy name). But these tunes are more muscular and oomph-y and, as the band readily admits, easily comparable to Weezer. They’re also totally worth your time and attention, and hopefully the Fuzzies will release them to the world soon. Thematically, they’re reported to be concerned with issues like adulthood, raising families and divorce, but seriously, unless you’re an established star, don’t go around telling people that your songs are about being in your 30s and 40s. It just makes you sound old. Let the tunes speak for themselves. The band plans to let the music do just that Dec. 5 at the Caledonia Lounge, when it plays with The Skipperdees and Dr. Squid. Tap your toe over at facebook.com/thewarmfuzzies.

A Hand Up: Word spread like wildfire last week when the news broke that local homeboys Vincas and The Powder Room had much of their gear stolen while at a tour stop in Chicago. Fans and friends immediately sprang into action, with donations pouring in quickly, and a fundraising campaign to help both bands re-claim their proper seats at the ruling table was was established within hours of the news breaking. You can help, too, by heading to indiegogo.com/projects/vincas-and-the-powder-room-evil-acts-relief-fund to, you know, provide some relief from evil acts! Throwin’ a big Athens hug around all of you guys for a speedy recovery and a killer 2014!

More of What You Love: Athens singer-songwriter and style maven Matt Hudgins has finalized work on the first official Shit-Hot Country Band 7-inch single, titled The Singles Collection: 2009–2013, and copies are now available for purchase in local record shops. Those who pre-ordered the record should receive it shortly, as Hudgins reports they are being sent out as we speak. He’ll be playing a double dose of shows this week, starting off at Flicker Theatre & Bar on Wednesday, Nov. 22 along with Joe Cat and Scott Baxendale and then Friday, Nov. 22 at The Hut on Baxter Street. These are Hudgins’ last shows for 2013, so hop to it. The two songs on The Singles Collection are “Hello Again 5am” and “Adderall & Alcohol,” and videos for each are available to stream at youtube.com/MrMattHudgins. (Digital downloads of the single, available at matthudgins.bandcamp.com, come packaged with all 10 songs from the Shit-Hot Country Band’s first album, Hitmakers, Vol. 1.) All additional Hudge love can be found at facebook.com/HudginsCountry.

Swing and Dine: Looking to jazz up your next vegan meal at the newly established Echo restaurant? Vocalist Marty Winkler had the same idea! The accomplished performer will play a set of holiday tunes on Friday, Nov. 29 (a.k.a. Black Friday) at 7 p.m. Winkler reports that you may never have heard some of these tunes—which speaks well for the holiday-songwriting industry—and she reports that she’ll even have a new song for the solstice. Now that’s some planning ahead, as the winter solstice doesn’t happen until Dec. 21. So take your cue and head on down. For more information, see martywinklermusic.com.

Off the Deep End: Although history will always rightfully acknowledge The Swimming Pool Q’s as an Atlanta band, the group’s music helped blur the hard-drawn sand lines between our burg and the one down the road. The reason I bring it up is because the band has just released its first new music since 2003 in the form of an EP named System of Love. It’s a preview of the group’s upcoming full-length, which is slated for 2014, and it’s just so good! A specific standout is the track “Easy Prey,” which features Anne Richmond Boston‘s vocals in full effect alongside the tune’s gorgeous spaghetti-western rhythm. It feels like it’s been a long time since I was so happy with the new music of an old band; this EP is a killer reminder to keep paying as much attention to everything for as long as possible. There are gems everywhere. Dig it over at swimmingpoolqs.bandcamp.com and join the band in friendship over at facebook.com/theswimmingpoolqs.