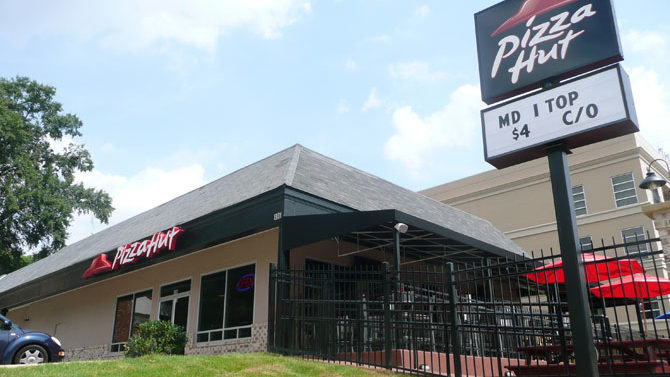 When You Were Weightless: Erstwhile Athenian and Elephant 6 cohort Nesey Gallons is on tour this month and will bring his music to town Saturday, Sept. 14. He’ll be playing at Flicker Theatre & Bar with El Hollín, Helen Scott, Whiskey Sunrise and Asheville, NC band Gold Light. Gallons released his most recent full-length, When I Was an Ice Skater, last December, and last month he released a companion four-track EP titled Boston, 1999. These releases feature guest appearances and collaborations from Will Cullen Hart, John Fernandes, Derek Almstead, Julian Koster and other E6 artists but are entirely the product of Gallons’ unique artistry, which is dignified by virtue of its intensity being tempered with brittleness. Which is particularly distinct from frailness. His music is just downright gorgeous. Enjoy for yourself at neseygallons.bandcamp.com.

For Meat Lovers Only: Word has spread quickly over the past couple of weeks about the show space at the newly renovated Pizza Hut on Baxter Street. Well, for a pizza joint, the truth is far less rock and roll than one might imagine. Armed with the slogan, “It’s not your typical Pizza Hut,” the performance room has no name of its own and is set up to be what talent booker Mo Lutz says is “a serious listening room. This won’t be the kind of place where you get drunk and scream over a punk band like you see at some downtown places.” To this end, the first show featured guitarist and luthier Scott Baxendale, and the next one, set for Sept. 20, features jazz guitarist Philippe Bertaud. The venture is a collaboration between Lutz, who works at the restaurant, and manager Allen Sorsdahl. Lutz reports that the restaurant will be open during shows, and will also sell beer and wine coolers. He plans to feature a wide range of music. “Not punk, though,” he says. “It’s a restaurant, not a club. It doesn’t fit. Maybe on a Saturday night we can pull a full band in here, but not while people are eating and talking.” I’d offer that metal, hardcore and pretty much any band that gets louder than the tinkling of ice in a Pepsi glass should probably look elsewhere, too. If you think your music fits the bill of what we’re talking about, drop a line to Lutz via chefbrucelutz@gmail.com. (There are also tentative plans for karaoke, Sunday afternoon shows and possibly even comedy, but nothing is set in stone.) A Facebook page for the space should exist in the near future, but for now, patrons can check the sign outside the restaurant. “It’s not your typical Pizza Hut,” Lutz reiterates. “We will have top-tier musicians.” I don’t really think I need to elaborate any further, do I? Have at it, folks.

All I Know Is That I Don’t Know Nothin’: Well, hearts are breaking among Ath-punk aficionados, 40-ounce malt liquor enthusiasts and everyone who was bumming around Athens in the mid-’90s over the news that Tres Kids are not doing their planned reunion shows. Who? I know. The trio is best remembered because of drummer Jason Griffin (NO!, Divorce, American Cheeseburger, Shaved Christ, et al), and did the Classic City well with its jostling hardcore tunes back in, you know, “the day.” Everything was punctuated with a solid sense of humor, which was at times endearing and other times irritating. It seems there wasn’t enough time to do a bunch of proper rehearsals, and the dream has been put on hold for the time being. Griffin’s new band, Harsh Words, will play Friday, Sept. 13 at Flicker with Future Virgins and Cheap Art. The next night, they’ll be part of an Athens/Atlanta bill of reunited bands rockin’ to the oldies at East Atlanta venue The Earl with Quadiliacha, Regicide and Level Head.

Leave A Light On: Longtime Athens musician and overall enthusiast Jon Lester has organized a benefit for Project Safe to be held Friday, Sept. 13 at Little Kings Shuffle Club. It’ll feature performances by St. Eel, Ranch, the aforementioned Jay Gonzalez, Lester himself, Witness the Apotheosis and In Sonitus Lux, which features Atlanta improvisational artist E. Serson Brannen. It’ll run you a mere $5 at the door, and 100 percent of the proceeds will benefit Project Safe, which works tirelessly to address and combat domestic violence in the Athens area. This night is also unique in that this is the first time Jon Lester has ever performed under his own name—over the past 25 or so years, he’s always used a band name, even for solo performances. This whole bill is a curious mix of the fully accessible and the nearly impenetrable, so plan accordingly. For more information on Project Safe, see project-safe.org.