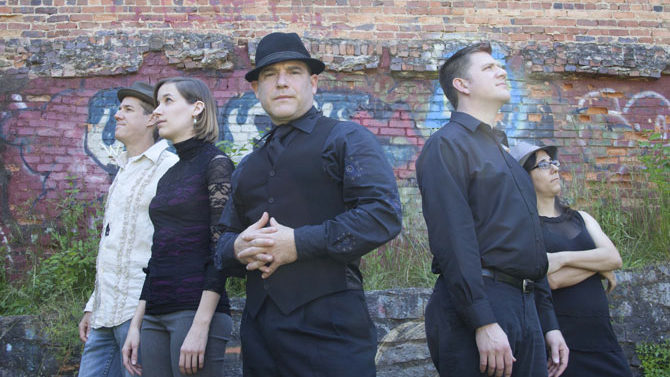 Nothing To Prove: Seems the summer heat has already gotten to Chris McKay, as the local songwriter got a wild hair last week and decided on a whim—his words—to go ahead and release his first ever solo release. The four-song EP, All Day Face, includes his newest solo recording, “Best Case Scenario”—imagine Steely Dan’s “My Old School” as interpreted by The Sweet—along with three other tracks he’s recorded during the past year. McKay says this release is hopefully the start of an EP series, because he “take[s] so very endlessly long to release full-lengths.” Longtime listeners will recognize the enthusiasm right off the bat, but this isn’t a Critical Darlings release. As such, McKay is a little more expansive with his writing, especially on the head-in-hands weeper “Everything Must Go,” which, thematically, is a nice track to follow the upbeat “Best of What’s Around.” Go have a listen at criticaldarlings.bandcamp.com.

Takes Five To Tango: Tango musician Laura Camacho has seen some shifting in her group, but everything seems to be settled down now with the addition of members Curran Prendergast on guitar, Franziska Brunner on clarinet and vocalist/finger snapper Ricardo Hurtado. The new combo has been christened the Athens Tango Project. There’s only one track you can currently check out at athenstangoproject.bandcamp.com, but I really encourage you to do so. If you dig, head to New Earth Music Hall on Saturday, June 15 and catch ATP with Cicada Rhythm and Powerkompany.

Flat As A Pancake: There’s a Kickstarter campaign going to help press Nesey Gallons‘ album When I Was an Ice Skater on vinyl. (There was this one time a while back where I made the cardinal mistake of printing Gallons’ birth name, and he got all huffy with me about that, so Lord knows I’ll not make that mistake again.) The monetary goal is an ambitious $4,500, but there are still a couple of weeks left. It’s a very nice album that makes you want to lie on the floor in a way that makes its wintry release date of December seem entirely appropriate. Gallons is joined on this release by his Elephant 6 cohorts Julian Koster, Will Cullen Hart, John Fernandes and Derek Almstead. Check out the campaign at kickstarter.com/projects/neseygallons/vinyl-of-when-i-was-an-ice-skater-by-nesey-gallons, and stream the record at neseygallons.bandcamp.com. It’s well worth your time.

Congrats Heather Mac: Heather McIntosh, the cellist and multi-instumentalist who cut her teeth with the Elephant 6 crowd before embarking on a star-studded career assisting artists like Gnarls Barkley and Lil Wayne, has been selected as one of six Fellows in the Feature Film category for the Composers Labs portion of the 2013 Sundance Institute Music and Sound Design Labs at Skywalker Sound. The event, which takes place July 10-25 at George Lucas’ above-named studio in Lucas Valley, CA, “[allows] composers and independent filmmakers to collaboratively explore the process of writing music for film.” McIntosh was selected thanks to her stellar scoring work on several recent films, including Compliance and The Rambler. [Gabe Vodicka]

Nobody’s Fool: Local teenage wunderkinds The Athens Band, whose novelty of youth everyone should have gotten over by now, released its newest EP last week. Its titled It’s Time to Rise, and you can find it at theathensband.bandcamp.com. It’s exactly what you’ve come to expect from the group, for whom hoary arena rock is its stock in trade. I dunno. Go give it a listen if you want, but if you do, you’ll probably want your 17 minutes back. I certainly did. Follow the leader over at facebook.com/AthenstheBand.

Lay Your Money Down: Matt Hudgins & His Shit-Hot Country Band has plans in the works to release a 7-inch vinyl single and digital download in the very near future. It’ll feature two previously unreleased songs and sport the brilliant title The Singles Collection: 2009-2013. The band hosted a special pre-order fiesta at Ciné earlier this week, where they debuted the music videos for the two songs on the 7-inch, “Hello Again, 5 am” and “Adderall and Alcohol.” They also screened the video for “Wilkes County Jail,” from Hudgins’ solo album Better Days Are Coming. The videos were shot on actual film by Spencer Adams and co-directed by Adams and Erskine McDonald. Hudgins is still taking pre-orders for the record—this is strictly an old-school pre-order effort, not a fundraising campaign to support its release. You can get in on the action at hudginscountry.com and matthudgins.bandcamp.com.

Multi-instrumentalist Jonathan Vance will return to Athens on Monday, June 17 to perform with his project Thunderbird at Go Bar. The show is part of Cult of Riggonia‘s Monday night summer residency at the venue. Each night has a theme, and this one is “Maury: You are Not the Father” and will feature Hand Sand Hands and Stupid Idiots, too. Vance made some waves in Athens back in April 2008 with his “30 Days of Vance,” during which he booked 30 collaborative shows with different sets of musicians, playing one-night-only material for the entire month. It’s exactly this kind of over-the-top intensity that informs Thunderbird, too. I’ve spun the band’s self-titled album, on which Vance plays everything, no less than three times through. It sounds like music made by someone throwing Led Zeppelin records through a broken window to someone else who’s throwing back Ornette Coleman records. Agree with me thoroughly after checking out thunderbirdatlanta.bandcamp.com.

Wintry Mix: The can-do dudes in Witness the Apotheosis have uploaded a couple of tracks to their brand-spankin’ new Soundcloud page. The significant one is their remix of R.E.M.’s “It Happened Today,” which is a really cool darkwave re-imagining of Athens’ favorite sons. Find it at soundcloud.com/witnesstheapotheosis. Word on the street is the duo is currently recording new material, and that’s a positive sign for fans, because the last set of all-original stuff came out in 2011. For the rest of the band’s catalog, you can head over to witnesstheapotheosis.bandcamp.com.