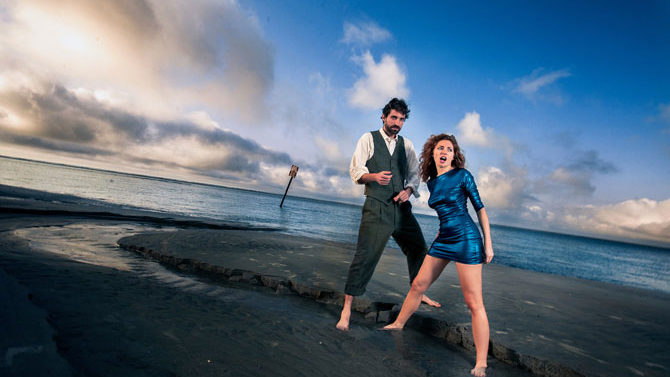 Welcome Back: This week I want to send a warm and hearty “welcome back” greeting to Ryan Cox, who has just moved back to the Athens area. If you recall this column circa 2006–2010, you’ll know I just couldn’t shut up about his music, released under the name Sailor Winters, or his label Black Noise. Upon his arrival a few weeks ago, he dropped a hearty pile of Black Noise releases in my lap from artists like Thorazine Gaze, Panzram Division, Sirens, Gruuthaagy, Khoomei, Drapatio and Demons That Drove. Don’t recognize these names? Don’t worry, no one does! But Cox has a keen ear, and I can honestly say I’ve found something worthwhile on virtually everything he has released. The label has turned a corner aesthetically, though; Cox seems kind of done with noise records and is moving instead toward more melodic stuff (albeit things that most likely still reside in the “outsider” section of the aural scale). A couple of recent tracks can be found at soundcloud.com/sailorwinters and a minimal, but acceptable, website can be accessed at sailorwinters.com.

Step Right Up: Athens rabble-rouser Mux Blank has reignited his Carnivale of Black Hearts, added a few members to the troupe and will host the Carnivale’s first happening in over a year on Monday, Apr. 1 at the Flicker Theatre & Bar. Billed as “The Fool’s Revival,” opening bands include Cramps tribute The De Luxe Interiors and Vermont’s Kris Gruen. Troupe members include Blank as Mr. Blank, The Orchestra of Broken Toys, Sarah Spiralz, Pride the Lycan, Madame Surayyah, Clown vs. Mime—performing “Clown-on-Mime or Mime-on-Clown violence”—Oscar & Meyer the Pig, fan flow artist Teagan, gothic princess Preya and Rezbar the Magic Marker. Featured events at the Carnivale include “The Dead Ballerina,” “Fire Ball Tits Burlesque,” bellydancing, something called “The Elephant Dance” and more. It’s OK if you take a minute to let that all sink in. I did. It all begins at 9 p.m., and more information can be found at facebook.com/carnivaleblackhearts.

Funky Bunch: The collaborative musical experience known as Our New Silence will happen at UGA’s Hugh Hodgson Hall Saturday, Mar. 30 at 8 p.m. Spearheaded by Kai Riedl‘s ongoing project Electrophoria, this free occurrence will feature members of pacificUV, Andrew Rieger (Elf Power), John Fernandes (Olivia Tremor Control), powerkompany, Revien, Killick and faculty and students of the Hugh Hodgson School of Music. The music is described as “re-imaginings, remixes and intermixes of the traditional music of Java, Indonesia,” all inspired by and sourced from a series of recordings known as Java Sounds, done by Riedl and engineer Suny Lyons. Also, Electrophoria will play some selections from its upcoming album release. The whole show is being recorded for a future Javanese radio broadcast. Follow along at facebook.com/Electrophoria.

Schooooool’s Out for a Bit!: The Oconee County Library (1080 Experiment Station Rd., Watkinsville) will host a Spring Break Dance for Teens on Friday, Mar. 29 from 6–9 p.m. The event is free and open to folks ages 11–18. Attendees can munch on free pizza and grab some free books to read over the break, too. The featured dance band is Yer Heart from Murfreesboro, TN, a group that is described as “Nintendo-influenced electronic indie-pop,” but this is no Bit Brigade or anything like that. It’s much more along the lines of a Reptar mixed with a Weezer. Listen in at yerhrt.bandcamp.com, check them out at facebook.com/yerheart. For more information, contact the Oconee County Library at 706-769-3950 or like ’em over at facebook.com/OconeeLibrary.

Sing Us a Song: Thanks to all y’all crazy-talented musicians who submitted Flagpole theme songs as part of our recent contest. Most of them were great! Some of them were really weird, but that’s cool, too. We’ve narrowed down the field to three finalists, but we can’t seem to settle on a consensus favorite. So, we’re asking our readers to help us choose the winner, because we are a democratic bunch. When the Flagpole Athens Music Awards ballot goes public about a month from now, there will be a Theme Song category included. You’ll be able to stream all three songs here on our website, and the winner will be featured at the June 20 Awards show. [Gabe Vodicka]

This-N-That: Chris Ezelle‘s new album Monticello finally comes out Apr. 1. The 12-track album will run you a mere five bucks via PayPal, and you’ll be able to stream it via reverbnation.com/chrisezelle… Athens kid-pop band Like Totally! will play an acoustic show at the Melting Point on Apr. 13 with the theme being healthy food. Teacher Andrew Hinerfeld will host a Q&A session where kids can ask him about farming and stuff. This kind of thing tends to pack out, so that’s why I’m telling you so early… Future Ape Tapes will celebrate the release of a new cassette tape, Somnambuland, at an experimental music night hosted by Ciné on Saturday, Mar. 30. Other acts on the bill are Quiet Evenings, Rainy Taxi and Sparkling Wide Pressure (aka Tennesee musician Frank Baugh). It starts at 9 p.m., and there’s a lot worse ways you could spend five bucks.