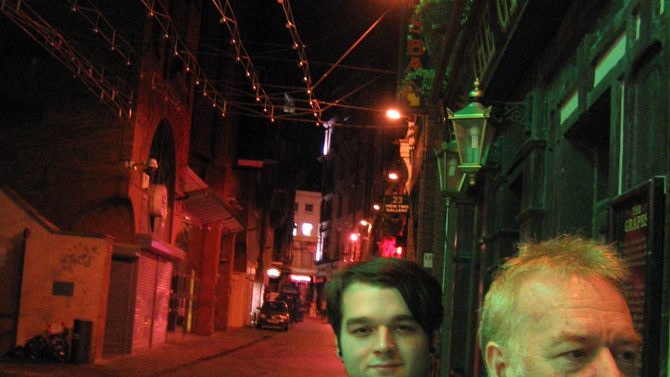 This latest release from the Michael Guthrie Band is a loving tribute to Jon Guthrie and features compositions from 1986â€“2009, all of which tie in emotionally to the scar left by the sudden loss of the young Guthrie in 2009. With this in mind, each track is imbued with additional solace and warmth.

Beginning with the gentle guitar sketch â€œPeace,â€ written by Jon himself, the album flows seamlessly into the truly grand â€œTime Won’t Wait,â€ which is characterized as much by restraint as it is by release. Musically, this compilation represents the very best of the Michael Guthrie Band. Through its classic British pop, tender balladry, incisive lyricism and flawless performances, Here to Eternity crystallizes the notion that love has always been the band’s catalyst. It also reinforces the fact that artists don’t always know exactly what they’re writing at the time words are scripted. Meaning can change over time until tragedy or joy reveal their clairvoyant quality.

The closing track, â€œEternity 2,â€ is a perfect representation of Jon’s style of writing, which was always more Smiths and The Jam than Michael’s Kinks and Small Faces. The most heart-stopping moment, in a record full of them, is the second-to-last track, â€œStarâ€â€”the music by young Guthrieâ€”when father Michael sings â€œYou were the one given to us/ …Take his soul into heaven/ Take his soul from this Earth/ Now you hold him in your arms/ You were a bright star shining upon us/ so pure and precious the way that you touched us/ Long will your light shine.â€ Simply put, there’s never been a better Michael Guthrie Band record nor a better reason for one to exist. The love here is tenderly chronicled and its articulation painstakingly crafted. It’s perfect.