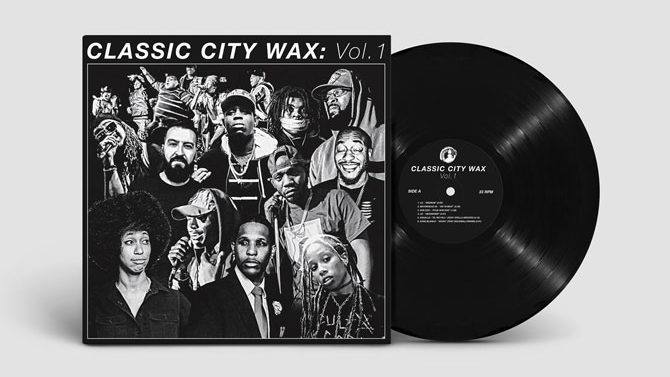 One of the more popular numbers from Athens rapper Squalle’s repertoire is a song called “Til We Fall.” For the artist born Torrance Wilcher, and raised in the Rolling Ridge and Pauldoe neighborhoods, the song is a hardcore statement of purpose.

“I’ve been on my mission from my birth,” Squalle rhymes. “My ambition I would like to give to the Earth/ And since you’re Mother Earth, you can share it with the world/ I wanna be the truth that our boys and our girls see/ I learned I was created from the dirt, so I gotta show these trees where they started from first.”

Squalle’s words are a community rallying cry—a decree to set an example by always remembering where you came from and never forgetting where you want to go. “Til We Fall” is one of 12 songs featured on a new compilation LP titled Classic City Wax, Vol. 1. The record is a survey of Athens’ brightest hip-hop artists, from Athens-Clarke County Commissioner Linqua Franqa to rising artists LG, Motorhead 2x, Son Zoo, LB, Kxng Blanco, DK, Cassie Chantel, The YOD, Caulfield and elder statesman Ishues.

The record drops Feb. 22, with a release party at Caledonia Lounge that night. For producer and organizer Montu Miller, it’s Squalle’s lyrics that project the spirit and drive behind the compilation.

“We want to advocate and shine a light on the neglected, mistreated hidden jewels of our community,” Miller says. “This project gives us another lane to operate. It shows everyone we are more than just a side conversation. We are here. We are doing it on a high level.” He adds, “Hip hop is not going nowhere.”

Classic City Wax is Athens’ first vinyl compilation to focus on local hip hop. The project was launched using a $1,500 Arts in Community grant awarded by the Athens Cultural Affairs Commission, which offered just the right amount to jump-start the community.

As Miller tells the story, one afternoon he’d stopped by Wuxtry Records and was chatting with one of the shop’s employees, Nate Mitchell. It was Mitchell who encouraged him to apply for the ACAC grant.

Miller is the COO behind local promotions company AthFactor Entertainment. Alongside DJ Chief Rocka, he also hosts hip-hop nights on the first Tuesday of each month. First Tuesday was built on a foundation Miller started circa 2005, when he launched Tasty Tuesdays at Tasty World. Over the years, his events have moved around downtown until settling into their current home at The World Famous. He also hosts the recently launched Hip Hop Don’t Stop music series on the third Saturday each month at That Bar downtown.

Obviously, Miller’s ties with Athens hip hop run deep. So, he put together a pitch for the compilation, and in July, ACAC announced Classic City Wax as an awardee, alongside the Athens Rising documentary film project and the annual LatinxFest.

Of course, $1,500 doesn’t cover the expense of recording, mixing, mastering, printing sleeves and pressing vinyl records. But in the spirit of community, all of the pieces fell into place. “Pretty much everybody donated their time, effort and skills to see the project through,” Miller says.

He adds that the grant was mostly used to cover pressing at Kindercore Vinyl, which pressed the records at cost. Jesse Mangum, who owns The Glow Recording Studio, found room in his schedule and budget to mix and master the songs, and each artist covered their expenses in exchange for 10 copies of the record. “Everything lined up like it was meant to happen,” Miller says. “We made it happen.”

Classic City Wax highlights a broad variety of musical styles flourishing amid Athens’ hip-hop scene. From the tongue-twisting word play of Linqua Franqa and Wesdaruler’s “Raw” and the stylish boom-bap of Ishues’ “Wow” to the fast triplet flow of Kxng Blanco’s “Whoa,” there’s an intellectual bent inscribed in each number that’s unique to Athens’ collegiate environs. It’s also a far cry from nearby Atlanta’s commercial trap notoriety. The community’s strength lies in its diversity.

Florida-raised emcee and choreographer LB feels the communal vibe. “I feel like I’m becoming part of a family with Athens hip hop,” she says. “It’s the variety of styles that you see going into it that really made me feel welcome.”

Her song, “Headnoise,” is a mantra for overcoming the distractions of everyday life, be it the inescapable nag of technology or anxiety over paying bills. “We all go about our days with rarely a moment of peace—with a clear mind,” she says. “‘The car died.’ ‘Rent is due.’ The hook in ‘Headnoise’ is about hitting that moment of overload and making yourself focus on one thing at a time in order to get through it all.”

Athens-born Motorhead 2x’s song, “On Ya,” is about embracing your identity. “There was a lot of negativity going around—people calling us downtown rappers, like it’s a bad thing that we go downtown and rap, and not just hang out and rap about street stuff,” he says. “Downtown is the University of Georgia, it’s a lot of students, and it’s a whole different world outside of downtown. I ain’t knocking nobody, and it’s getting better all the time, so we need to think about it like this is all of our city.”

For its initial run, Classic City Wax, Vol. 1 is pressed in a limited edition of 250 copies. Miller is open to the idea of pressing more if the demand is there. He is in discussions regarding other means to keep the project in print, such as benefit shows, crowdfunding and investors. But keeping the series moving forward is his priority.

“I want this to be an ongoing project where years from now I’m on, like, Vol. 12,” Miller says. “I want to see a new one every year—see it become the compilation of compilations that capture Athens hip hop.”