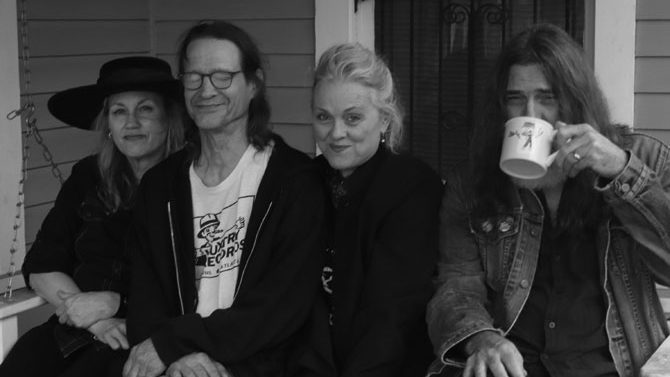 Magnapop is in Europe playing shows and preparing for the arrival of the group’s sixth album, The Circle Is Round, out Sept. 27 via Athens’ HHBTM Records. Belgium, Holland and the rest of the Benelux region have been Magnapop’s home away from home since the early 1990s, when Hopper passed the group’s Michael Stipe-produced demo tape along to a pair of Dutch journalists at a New Music Seminar.

“None of us are good networkers,” Hopper says. “I had two tapes with me. I gave one to someone’s dad and the other to these two guys. After that, we started selling out shows over here, which is really kind of miraculous.”

Even now, Magnapop owes the title of its latest album to a Dutch journalist who recently stumbled over his own words. “We were in Holland doing an interview, and the journalist was trying to say that the band has come full circle, like how we say in America, but he couldn’t find the right words, and kept mistranslating it,” Morris says. “He said, ‘Ah yes, so the circle is round!’ And Linda said, ‘Well yes, the circle is round.’ We all kept laughing about it, and then we ended up using it for the name of the record.”

Joking aside, Magnapop has come full circle on its journey from a fledgling alternative/indie-rock band crafting songs in Atlanta’s Cabbagetown music scene of the early ’90s to becoming a power-pop outfit with an international legacy.

The Circle Is Round conceptually and literally distills the heavy guitar tones, yearning rhythms and pop songwriting that span the group’s lifetime. Its founding members, singer Hopper and guitarist Morris, have reunited with their original rhythm section of bass player Shannon Mulvaney and drummer David McNair. New songs, such as the latest single, “Dog on the Door,” and the album’s most sentimental rocker, “A Simple Plan,” are placed alongside “Leo” and “Pretty Awful,” two unreleased demos from the group’s 1992 recording session. “Change Your Hair” is the very first song Hopper and Morris wrote together, before they even had a band. “Rip the Wreck” appeared on the A-side of their first single, a 7-inch released in 1990, back when the group was playing and recording under the name Homemade Sister.

After 30 years of lineup changes, cross-country moves and long gaps between activity, the group has been on a slow but steady roll since 2011, when Mulvaney approached everyone about reconvening to play a benefit show for Atlanta’s Criminal Records. Since then, the original lineup has settled back into place—this time for good. “You will never see Magnapop ever again when it is anything but Linda, Ruthie, Shannon and David,” Morris says.

In conversation, the chemistry between Morris and Hopper is a seamless flow, as each one nearly finishes the other’s thoughts.

“All the dumb stuff that gets in the way with a lot of bands, like personalities and stuff like that, doesn’t come into play with us anymore,” says Hopper. “We know how to anticipate each other. Also, we’re all better musicians now. We’ve been playing music for all of these years, and that collective experience has really settled into place as we bring ourselves back together to play these songs.”

As such, The Circle Is Round carries Magnapop’s signature balance of shambolic rock and nuanced songwriting, reigniting the yearning drive of the group’s self-titled debut or 1994’s Hotboxing. Some of the album’s songs were written a long time ago, though most of them are brand new. Taken as a whole, the record gives an irrefutable picture of Magnapop’s identity—past, present and future.