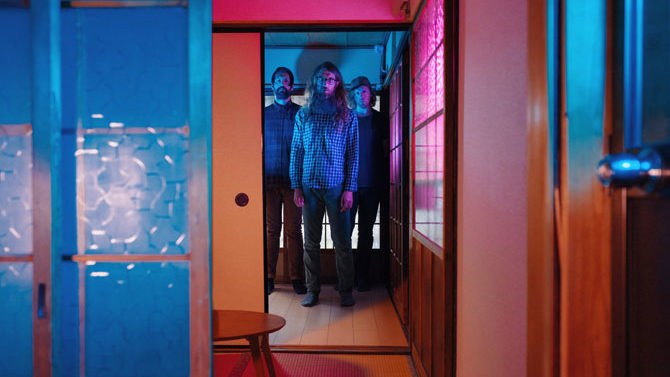 Maps & Atlases harness a variety of sounds and, in the process, push the limits of easy categorization. After taking a six-year hiatus, the Chicago indie-rock trio returned this month with Lightlessness Is Nothing New, out via its longtime label Barsuk Records. The group stops by the Georgia Theatre Saturday to serenade Athens with its multifaceted sound, which contains elements of math rock, synthpop and folk.

The band’s previous record, Beware and Be Grateful, released in 2012, was where it first began to push the limits of sound experimentation, featuring inventive time signatures and polyrhythmic vocal melodies. The latest record continues this experimental take, as it finds the group hitting full stride and moving in a “weirder” direction sonically, as guitarist and vocalist Dave Davison puts it. “The newest record is similar, but different,” Davison says. “Different in the sense that it’s progressed.”

On Lightlessness Is Nothing New, Davison, bassist Shiraz Dada and drummer Chris Hainey take on anxiety, fear, happiness and everything in between. Throughout, Davison confronts the grief he felt after the death of his father, while also striving to shine a light on the positive things the world has to offer. “Difficult situations prompted the creation of some of the songs, but at the same time, it was processing and featuring elements of those same time periods,” Davison says.

Since releasing their debut full-length, Perch Patchwork, in 2010, Maps & Atlases’ sound has matured, delving deep into pushing the limits of vocals and guitar. Prior to releasing that LP, the group dropped a few EPs of classic math rock that emphasized busy guitar tones and erratic combinations of sounds. Early songs such as “Pigeon” are straightforward lyrically, with jagged, rubbery guitar riffs scattered among the campfire-style strumming.

“[‘Pigeon’] is kind of a tightrope walk, because it’s just me singing and playing guitar for a really long time, and if I mess up or break a string, it could be catastrophic,” Davison says.

On the latest record, songs like “Ringing Bell” take a more personal touch, with lyrics such as: “Thought I saw the last of your warmth leave/ I saw it leaving in your eyes/ Can’t believe how much I still need/ Can’t believe how little I know why.” “When I listen to [‘Ringing Bell’], I think, ‘This is the kind of song I’d like to write in general,” Davison says.

Lightlessness is also the first record the group has released since the departure of guitarist Erin Elders, who left to pursue his passion of film directing. Longtime producer Jason Cupp (American Football, Good Old War) returned to the studio, with Scott Solter (The Mountain Goats, Bombadil, Pattern Is Movement) on hand to assist. With Cupp’s familiarity combining with Solter’s fresh insight, the group’s recording process reached new heights.

“When I first started working on this, I wasn’t sure if it was going to be a full-band album or a solo album,” Davison says. “…[I]n the early stages, I was working with Jason to record it. He recorded our previous two albums. That helped the structure. It helped the songs come into existence in recorded form.”

“Since [we’ve been] touring as a three-piece, it’s given us time to experiment [with] playing together, especially in the live setting,” Davison says. “We have a kind of different dynamic and are able to be more loose—our jams have taken on a different dynamic.”