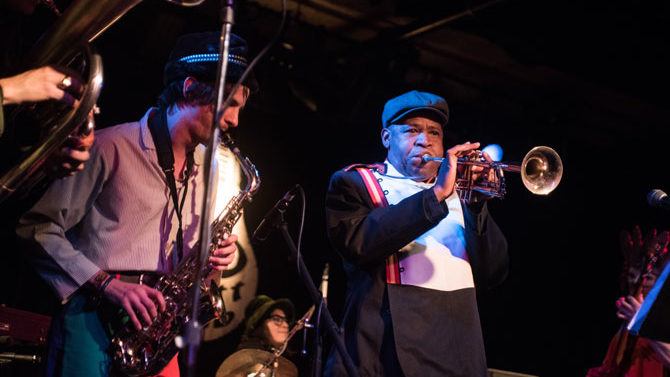 Editor’s note: For the second installment in Flagpole‘s series of year-end music coverage—we’ll conclude on Jan. 6 with our top 10 albums list—we invited local musicians and those otherwise connected with the scene to tell us their favorite things about Athens music in 2015.

Andrew Rieger (Elf Power): Strangest Athens album of 2015: Vernon Thornsberry, Jazz Jazz Jazz (and More Jazz). The title is a bit misleading, as while there are certainly many traditional jazz instruments (horns, pianos, clarinet, drums) on this album, the disjointed, jubilant stew that Vernon cooks up on here really defies any labels. The music is so off-kilter and ecstatic it can be hard to make sense of at times, but it all coalesces into a wonderful mix of Captain Beefheart-styled, atonal jazzy freakouts. Highly recommended for the adventurous listener.

Killick Hinds: Flicker Theatre, Nov. 12. Cellist Alec Livaditis, with horn players Stephen Roach and Peter Sloan, mesmerized a packed room. The music was varied, nuanced and immediate—no small feat—but what I loved most was the interaction with the audience. Performers and attendees, together in exploration, as if for a brief moment constant digital distraction was never a thing. When the program concluded with sudden spontaneous tensegrity, all hands clapped, nary a selfie stick aloft.

Mike Turner (HHBTM Records): In 2015, I set out to see one show a week, or try for 52 shows total for the year. At this time, I’m about four shows short, but might be able to make the goal for the year. For 2016, I want to make that 52 local shows in Athens. I noticed over the years I went out less and less, and had almost stopped going to see shows. Living in Athens, there are so many shows, sometimes you just don’t go see any at all. I hope this kind of thing might become a trend, going out and supporting the scene. One show a week isn’t that hard to do when the prices are roughly $5 a show. As far as one of my favorite live moments for the year, that would be seeing Polaris at the 40 Watt, then being able to walk next door to the Caledonia and still catch a good bit of Willis Earl Beal. So, thanks to Athens Intensified for that.

Jianna Justice (Penny Lame): By far, the music moment of 2015 I still can’t shake was seeing Mothers’ “In the Evening I am Forgotten“ performance as a three-piece at Flicker Bar. I’ve always sort of clung to Mothers; Kristine was the first act I saw when I moved to Athens, and has since influenced my decision to create music and perform as a solo act. On this night, she effortlessly wove spoken word, visual art and previously unheard powerhouse songs into one seamless show. Each moment was cloaked in her signature painstakingly detailed style, which reached a climax when she played a quiet solo while a masked figure lopped off locks of her hair with blunt scissors. It was intense and comforting, intimate yet isolating, grueling and stunning. Everyone left feeling like we had shared something unquestionably special.

John Norris (Crazy Hoarse, Hot Club of Athens): As a player, what I’m really enjoying lately is making music in widely (and often wildly) varying styles, with the only constant thread being the fact that there are such wonderful people in Athens to make it with. Whether it’s exploring what’s musically possible with electrons and mathematical possibilities, taking comfort in organic melodies with human stories or kicking the groove around in a big way, it’s all communication. So many things about life are so fucked up and intractable, but getting together to play and listen with other people is certainly lots of fun. Ephemeral, yes, but still magical.

AJ Griffin (French Exit): The most enduring musical memory for me, in an year chock full of ’em, has to be the giant E6 bonanza that took place at Orange Twin in May; seeing Elf Power, Thimble Circus, Circulatory System and Neutral Milk Hotel—bands I, like most people my age, discovered and frankly obsessed over during those formative years of high school and college—playing together outside in the beautiful heartland, if you will, of that whole community, I couldn’t help but take a step back and appreciate the grandeur of it all. And as if that wasn’t enough to make your heart get a little bigger, there was the image of Robert Schneider accompanied on stage by his son, Max, whose obvious talent would give even the most curmudgeonly person (probably has to be Scott Spillane, right?) a warm sense of optimism that this movement—or collective, or unique amalgam of souls, or whatever you want to call it—will continue to endure for years to come. Top all that off with The Music Tapes guiding us into nightfall with their well-honed sense of magic and a sea of friendly, familiar faces in the crowd throughout the day, and you’ve got yourself a heck of an experience. Also, I think I may have eaten an entire turkey leg, but I’m a little fuzzy on that part.

Taylor Chmura (Deep State): Opinions are damning. The urge to compartmentalize personal experiences into the span of a single year is dangerous. What if our individual eras/phases/cycles started in the middle of 2015 and will extend into the middle of 2016? Have we fallen out of line? Out of time’s axis? Why should we begin and end on the calendar constructed by mere human beings? YOU WERE BORN TO CHOOSE. CHOOSE YOUR TIME.

Bathrooms and Nurse (ATL) played a show so physically inspiring that the glass windows of Go Bar were destroyed. It was a brutal summer. Jason Griffin is fat.

Everyone was pretty nice. Everyone forgot their hang-ups a couple times this year.

Alyssa DeHayes (Arrowhawk Records): My favorite music moment of 2015 was Arbor Labor Union’s (fka Pinecones) vinyl release show on the Georgia Theatre rooftop. After months of getting that release together, it was so nice to take it all in and celebrate. It was cool seeing a handful of artists, like Arbor Labor Union and Mothers, get picked up by national labels. When you mention Athens music to out-of-towners, they usually cite the same classic artists who broke through 20-plus years ago, so I’m glad people are taking note of how solid our scene is right now.

Either that, or waiting in the UGA ID office with professor Andrew Rieger (Elf Power) to get our faculty IDs. College-aged me wouldn’t have believed you if you told her that, 10 years later, she’d be teacher pals with the frontman of one of her favorite bands.

Sebastian Marquez (Dead Neighbors): Oof—there was a lot that happened this year. After playing some of our most fun shows with Meth Wax, listening to Saline’s Dumb EP for the first time, being there for the meteoric rise of Mothers and releasing Dead Neighbors’ first album, I had to think about this pretty hard. But I think the one moment that stuck with me the most this year would have to be witnessing the death and rebirth of Scooterbabe. Their two tapes hold a lot of sentimental value for me, so having them back feels pretty darn nice.

Matt Etgen (New West Records): My 2015 highlight was the intimate Hope for Agoldensummer show at Normaltown Hall on Apr. 2. As always, the Campbell sisters, Claire and Page, with accompaniment by Patrick Morales, held the audience rapt as they wove a rich tapestry of songs, punctuated by stage banter often simultaneously poignant and hilarious. The power of their kinship is timeless and magical to me. The highlight of the show was the as-yet unreleased song “Spark of Life,” a fertility anthem disguised within gardening metaphors. I swear I tear up every time I hear it.

David Barbe: 2015 was a weird and wonderful year for me. It started out with a bad case of shingles that kept me down for four or five months. Down, but never out. Here is how I spent my time musically with four truly incredible Athens bands, two bonafide legends and a crazy great show at one of our fine venues:

February, March, April, May: Mixed Drive-By Truckers’ It’s Great to Be Alive! A career-spanning five-disc vinyl set takes a long time to mix. I just got so into it, I couldn’t stop fooling with it.  Mastered it in NYC at Sterling Sound with Greg Calbi in mid-May, at which point I…

May: …came home and made an album with Shade in four days, pillar to post, tracking and mixing. One-inch eight-track analog, mixed to 1/4-inch analog. A four-day weekend of their complex, emotionally satisfying sludge.

June: New Madrid rented a church camp on Lake Chickamauga in Soddy-Daisy, TN, where we set up an impromptu studio and recorded about half of their next album.

July: Came back to Chase Park Transduction and recorded the rest of New Madrid’s album.

August: Made a Muuy Biien album in much the same style as the Shade album. One-inch eight-track, recorded in a few days time at CPT. An impressive musical departure for Muuy Biien and a very cool step forwards.

Sept. 26: Had the mind-bending honor of inducting my parents, Jane and John Barbe, into the Georgia Music Hall of Fame.

October: Mixed New Madrid album at CPT. DBT live album released Oct. 30 to excellent reviews, which meant that they were now preparing to make yet another record.

November: Finished mixing New Madrid album. Being a double album, it took a while, and once again, it’s hard to let go of something you have been living with for six months. Mastered it in NYC with Greg Calbi at Sterling Sound a week before Thanksgiving. Drove to Nashville the day after I got home to track a fiery new DBT album at Sound Emporium in a three-day window.

Other than that, not much.