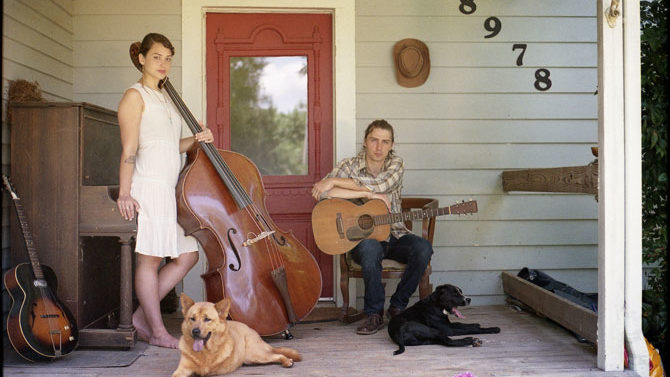 Cicada Rhythm’s self-titled debut sounds like driving: driving at night, at dawn, past farmland on lonesome back roads or cityscapes on busy interstate highways. The music is slow and patient at times, fierce and energetic at others. But it’s always moving forward.

Currently, Cicada Rhythm is driving through the Midwest, on tour supporting Indiana folk-rockers Houndmouth. There’s only one problem: They’re not quite sure where they’re going.

“I thought we were playing in Milwaukee?” guitarist Dave Kirslis interjects.

A quick check, and a determination: Milwaukee it is. “We’ve never been to any of these cities,” DeMarcus says with a laugh.

Forgive the two for feeling overwhelmed. After years of grinding out an existence on the periphery of the roots music scene, building a word-of-mouth fan base with a four-song demo and a seemingly nonstop series of powerfully understated performances, Cicada Rhythm has reached a point of peak activity. Now, the band seems perched on the edge of something more.

In 2013, Kirslis, a onetime train-hopper, and DeMarcus, a Juilliard grad—the two are romantic as well as creative partners—relocated from Atlanta to Athens. This summer, they signed with New West imprint Normaltown Records. In October, the label released Cicada Rhythm, a striking, 12-song collection that has inspired praise from outlets like NPR.

Though writing the album took place over the span of at least two years, Kirslis says the finished product came together in a matter of days. “It’s pretty minimal, pretty raw and barebones,” he says. “But we did have a lot of people collaborate with us.”

Those collaborators included Athens engineer Drew Vandenberg, as well as pedal-steel whiz Matt Stoessel, drummers Colin Agnew and Justin Holtsclaw, multi-instrumentalist Rex Hussman and a handful of other session players. Yet the LP never feels bloated, even when all hands are on deck. “Whatever we added, we wanted to keep it light,” explains DeMarcus.

In contrast to the group’s 2011 demo, the new record showcases more than Kirslis’ earthy fingerpicking and DeMarcus’ standup bass skills, though those talents, as well as both singers’ distinct, dramatic voices, remain the music’s heart. Vandenberg helped the band fill out its sound with tasteful flourishes: the atmospheric reverb swirl on “Shadows Before You”; the loose, expansive Brit-psych vibe of “Round Yellow Suitcase”; the grimy garage-rock feel of “Dirty Hound.”

“We might have made an unconscious move towards getting away from strictly folk-based stuff, or bluegrass-tinged [songs],” says DeMarcus—a smart move for a group that otherwise risks being overshadowed by its association with that strain of hey-ho, capital-A Americana so prevalent on FM radio and TV commercial soundtracks.

The music on Cicada Rhythm is antithetical to those fraudulent folk sounds. Among other assets, it bears a definite geographic stamp, not in a stereotypical sense—as DeMarcus jokes, they make Southern music “without having to shout ‘Kentucky!’ or ‘Alabama!’”—but in its deep understanding of what came before. (Adding to its sense of time and place, the record was partly recorded in a decommissioned 19th Century church in rural Sparta.)

“I feel like there’s a lot of music out there right now that you can see live or hear on the radio and draw no connections to the past,” says Kirslis. “A lot of Southern music, early folk and country and blues, a lot of the riffs people played and the progressions show through in [our] music… You can sense some sort of appreciation for the past. That’s what makes it Southern for me.”

In addition, Cicada Rhythm reflects the band’s new hometown, in both its willingness to experiment and its communal spirit. “We’ve fallen in love with Athens,” says Kirslis. DeMarcus adds, “A lot of our older music was kind of lighthearted and simple, and I think now it’s a little more intensified. Some of the songs are a little heavier, or more complex in terms of meaning.”

Kirslis attributes the creative change to Athens’ “encouraging atmosphere,” adding, “Everyone in the town understands, to some degree, the life of a musician. Everyone we’ve worked for has been really encouraging and flexible in wanting us to pursue our musical dreams.”

Beyond the encouragement of friends, fans and bosses, unexpected industry support has given Cicada Rhythm its biggest boost yet.

“Initially, we were kinda nervous” about signing on with Normaltown, says Kirslis. “From doing this whole thing by ourselves, we started working with a record label and a management group and a booking agent… kind of all of a sudden. We quickly found that those were some of our best friends. They were really helpful, and they seem to be really invested.”

Still, don’t look for any flagrant careerism from this group, which seems content leaving the particulars of its journey to the open road. As Kirslis sings sagely on “Round Yellow Suitcase”: “No need for maps, just let fate take course/ You’ll see some things are better left a mystery.”