Helmet Looks Back on Betty 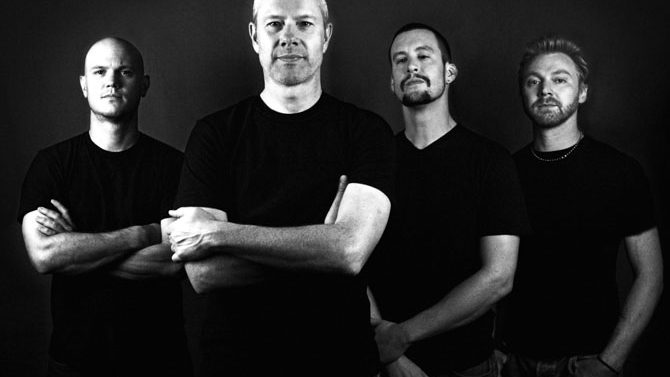 In June 1994, Helmet released its third album, Betty. The 14-song opus was defiantly uncompromising, yet the distorted riffs in songs like “Wilma’s Rainbow,” “Biscuits for Smut” and “Milquetoast” remain among the group’s most brilliant moments.

More than 20 years later, singer and guitarist Page Hamilton sees Betty as a complex work of musical experimentation—Helmet’s “fuck-you record,” as he calls it, characterized by a fierce dedication to personal integrity.

“I would never compare myself to Paul Westerberg from the Replacements or Ray Davies from the Kinks, but they are two of my heroes,” Hamilton says. “Both had a penchant for shooting themselves in the foot. When things are going well, rather than play along, you go in and take a piss on the record company’s desk.”

In 1992, American pop culture was deep in the throes of Nirvana fever. Nevermind was selling 300,000 copies each week, and labels were heaving money at any band that might follow suit. That year, Helmet signed a $1 million deal with Interscope and released its second album, Meantime.

The teeth-gnashing guitars and rhythmic tension of “In the Meantime” set the tone for a powerhouse record steeped in heavy guitars moving at breakneck speeds. Meantime would sell more than 500,000 copies and was certified gold by the Recording Industry Association of America. “In the Meantime” earned a Grammy nomination for Best Metal Performance.

Suddenly, lawyers and managers who previously wouldn’t give Helmet the time of day had opinions on what the band should do next. “Everybody wanted Meantime, Part Two,” Hamilton says. “It’s common for bands to cater to the marketplace, but that’s never been me. [We] wanted to make music that we thought was interesting and that we liked.”

T-Ray, born Todd Ray, a producer who had helmed Cypress Hill’s hit “I Ain’t Goin’ Out Like That,” was brought on board to engineer the band’s follow-up after Hamilton heard Ray’s remix of the Helmet-House of Pain collaboration “Just Another Victim.” At the time, Helmet was on shaky ground. Personalities clashed, and the label wanted someone who could pull them together.

“Page wasn’t happy with the music,” Ray says. “I looked at what he’d written, and it was great. I said, ‘You have to get your mind right. This all depends on you.’ I became an inspirational partner.”

But Betty was Ray’s first rock record; as a hip hop producer, recording guitars was outside of his expertise. Other engineers, including Martin Bisi (Swans, Sonic Youth), came in to keep the sessions on track.

“When they called me, the basic tracks were done, but the guitar recording was pretty botched,” Bisi says. “It was a big deal to have to re-record those parts, but the vibe in the studio was that, ‘This is not about rock. This is about rhythm.’”

Though its sales never matched those of Meantime, Betty remains a fan darling, and artistically, it embodies the peak of Helmet’s ’90s legacy, having expanded the band’s sound on all fronts.

Two decade after its release, Hamilton has taken the album back on the road with a new backing band—guitarist Dan Beeman, drummer Kyle Stevenson and bass player Dave Case—playing its 14 songs from beginning to end.

Tapping into the mental and physical space he inhabited when the songs were new proved daunting at first. “Some of the songs are difficult to play live, and some had never been done live at all,” Hamilton says.

Chief among the unplayed songs is Betty’s “trash-folk” closer, “Sam Hell.” “Silver Hawaiian,” “Street Crab” and “Clean” had short shelf lives on the original tour, too. “Since I’ve [become] familiar with the flow of the album, it’s been the most fun I’ve had on tour in a long time,” says Hamilton.

Each night, the group plays a second set, touching on material from Helmet’s 1989 “Born Annoying” 7-inch through its 2010 album Seeing Eye Dog. “It’s a tour for the fans that have hung with us for so long,” Hamilton says.

For Ray, who now runs the Venice Beach Freakshow—the subject of the AMC reality series “Freakshow”—the nod to Betty brings profound validation. “When we were in the studio, I remember saying to Page, ‘In 20 years, I want you to look back on this record and be proud of it,” Ray says. “And here we are.”