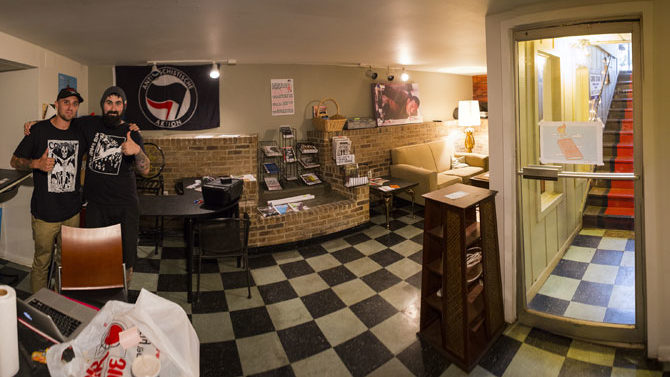 An ambitious effort in the form of a radical bookstore has launched at 295 1/2 E. Broad St. The shop is called Bombs Away Books (stylized as Bombs Away!), and it’s started off with a bang by hosting a series of all-ages, alcohol-free punk shows.

Bombs Away, which is managed and operated collectively by its employees, is designed as a “safe place for local residents and students to learn, listen and unwind.” In addition to books and music, organizers have plans to “offer a free school, which includes courses in Spanish, medical care and overdose awareness, software skills, writing, public safety and more.”

Flagpole caught up with Bombs Away’s Joseph Turner to find out more.

Flagpole: Where did the idea for Bombs Away come from? Who are the principal folks involved?

Joseph Turner: Bombs Away! Books started because we [had] been wishing for an all-ages DIY space in Athens. Two of us play in a band called Under a Sky So Blue, and we have played in so many cool cities with awesome DIY spaces. I always wished we had something like that in Athens.

As far as the bookstore side of it, ever since learning about anarchism, for me, it’s never been enough to just sit around and read about things. It’s always been a question of, what more can I do, and how can I find like-minded people so we can organize and find ways to change the world, or at least our city? We plan to work with many Athens-based groups.

Currently, Bombs Away! is a collective made up of myself, my fiancée Brittany Crook, Joey Argento, Nick Wilson, Stella Zine, Oliver Vitale, Andy Torrey [and] Erin Hubbard, and our collective is growing with more volunteers. We have weekly collective meetings, and anyone is welcome to come in and become part of this. The hours are on our Facebook [page]. Bombs Away! is volunteer-based, and we make no personal profit. We pay rent through the shows we book, the books we sell, donations we are given and the events we hold at the space.

We [looked at] several different spots when we were looking for a place to run the bookstore, but one spot in particular stood out, not only due to the perfect location but how down-to-earth the landlord was. [He] actually runs his real estate office and other small businesses out of the back office of the store. He helps with our events, and has been extremely supportive from the beginning. We got very lucky with that.

FP: What are the guiding principles behind the space?

JT: We are worker-owned, DIY and volunteer-based on anarchist principles. What I mean by anarchist principles [is] rejecting all hierarchy, capitalism—the best that we can while existing in a capitalist system—sexism, racism, white supremacy, transphobia, homophobia, ableism, xenophobia, Islamophobia, speciesism and any form of discrimination or fascism. We support equality, autonomy, mutual aid and the idea of true liberation for every living being. We want to offer a space where new ideas can grow and the community can call it their own…

[We want to help] unify and build the music scene in Athens, bring through awesome bands from different genres from all over the world, offer an all-ages space where creativity can brew, bring independent authors to Athens, be used as a meeting space for organizations and offer radical, independent literature that you [can’t] find at your typical bookstore… We want to eventually have a free school and our own small publishing collective, too.

FP: Downtown continues to fill with luxury student apartments and chain stores. What’s the significance of Bombs Away opening amidst all that?

JT: With issues such as gentrification, it’s important to be aware of what presence you have in whatever city you are doing any kind of business in, even if it is a collectively-run radical bookstore and DIY venue. We aim to work in the community and offer ideas and resources that can arm people’s minds with tools that can help combat the bleak realities of this world. It’s important that every city has radical spaces, and that they serve as a small example of what we could do in a world without capitalism.

Athens is known for its bar scene, and that’s fine. However, there needs to be a space that is open to any individual [who wants] to channel their creativity, organize with others and learn new ideas. We want people to come in and just hang out with us, whether it be at shows or during store hours. It’s a big deal that we connect with one another and demonstrate alternative methods to everyday life. We are all workers and students. This is [a] space we can truly call our own.

Check out Bombs Away’s schedule of events by visiting facebook.com/bombsawaybooks.