‘A Fun Thing to Do’: Former Athens House-Show Hosts Look Back 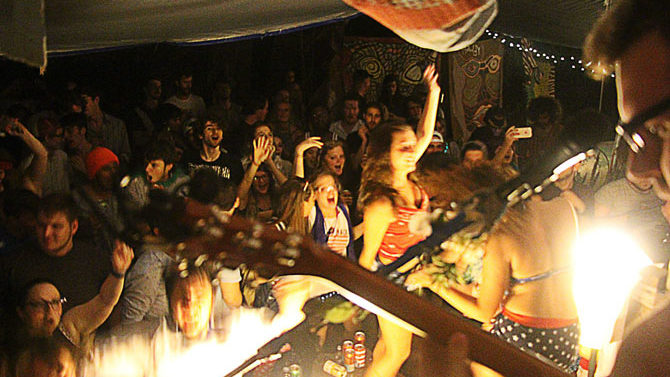 Godless Red, Cohen Street and Peter Street were the long-running houses I lived at for years and years, doing lots of shows. I guess I started playing house shows around ’94 or ’95, ’til about 2010. I finally stopped doing shows at my own house about five or six years ago. Peter Street Thrash Castle was the last one. I still play house shows. People are always gonna do them. They always spring up and come to an end. We had bands from all over the world. I did get a noise ticket, eventually, after almost 16 years. Other than that, and the occasional drunken troublemaker, there were no problems.—Jason Griffin

Sometime in 1997, Dan Geller called me up and asked if I could do a show at the Ultramod for some old pals of his that used to be in Cap’n Jazz. They had just finished their second album with their new band, The Promise Ring. I think we charged $3 at the door, and over 200 people showed up. There were plenty of official rooms for bands to play in, but the indie touring community operated by such word-of-mouth that if you did house shows of pretty much any quality, pretty soon your phone was slammed. Nothing was ever donation-only. There was always a door charge of between $3–5. Bands are the same everywhere, no matter what the situation. Some are rock stars; some are awesome. The hilarity of a touring band pushing its weight around about a show held in a living room is self-evidently ridiculous, but it happened. We didn’t have any scene politics involved at the Ultramod like some other houses did. We weren’t vegans, or believers in hardcore ‘till death, or anything like that. We just did shows because it was a fun thing to do, and we had a very inexpensive house on a bad side of town and no one cared how much noise we made.—Gordon Lamb

The first house was on Willow Street, not too far from the Ultramod. That house was the Godless Red Athens Chapter (a fully licensed subsidiary of the Godless Red house in Atlanta), and the first show there was Tres Kids and Hickey on Oct. 30, 1995, attended by about 20 people. The second incarnation of Godless Red was located on East Campus Road, out near the intramural fields. That house had way fewer shows, because by that time there were more options for punk and hardcore bands to play around town, and frankly, hosting house shows is a pretty thankless task; the novelty wears off quick. The last show at the Godless Red Athens was on Jan. 30, 1998. We started because there was a void, the DIY hardcore scene was in full swing, and while there were great bands that played in town every week, it wasn’t very friendly to hardcore and punk. So, the bands that didn’t get booked into the clubs, or who wanted an all-ages, DIY kind of show needed a spot to play. Selfishly, it meant we could have bands play in Athens that we would otherwise have had to drive to Atlanta to see.—Gray Kiser

I booked shows from 1996 through 2001 or so at the Buckhead Beach Warehouse, at Bobafettucine’s on North Avenue and then also at HOBS (House of Brave Souls) and 175 Conrad Dr. (Union Hall). I also booked the occasional show elsewhere: Godless Red, etc. I had previously been booking shows around ATL and the ‘burbs before moving to Athens. My pal Ryan Kellogg and I worked on putting out a Food Not Bombs comp, and we raised a lot of money needed to put that out through benefit shows. We did end up raising a decent amount of money for FNB. I’m not sure why I stopped. Perhaps being over 21, drinking and partying, working too much at The Grit and graduate school all got in the way. There were some shows (especially in summer) where turnout would be low, which was a bummer for touring bands who needed gas money. But I always ensured they had a decent place to crash and at least a solid spaghetti dinner. I met great, talented folks from all over. I think the Internet definitely makes most things more accessible, but it kind of makes everything over-saturated now.—Patrick Fraser