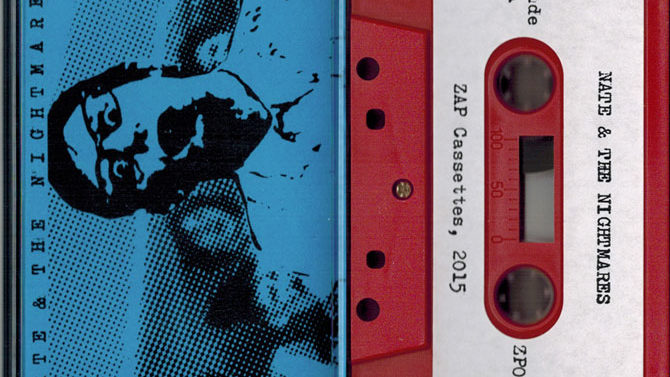 Increasingly, cassette is the preferred format for Athens bands looking to drop a new project without dropping a ton of bucks. Also increasingly, thanks to the support of a handful of enterprising local and regional tape labels, those cassettes are beautifully packaged and readily available. With this in mind, Flagpole set out to round up some of the most notable recent tape releases. You can find copies of most of these albums at local shops like Wuxtry and Low Yo Yo Stuff; we’ve also included online purchasing links where that option is available.

Strap on your Walkman and press play below:

Owing not to the third- or fourth-wave garage-rock revival of the last couple decades so much as its goonish, greased-up source material, Athens trio Free Associates (“Free Ass,” as they’re neatly nicknamed) howl and rip their way to some version of hell-on-earth on their latest tape release. Opener “This’ll Be the Day That I Die” gives Don McLean’s sterilized vision of America a steely-eyed once-over, while the aptly titled “Link Wray” pays chaotic homage to the late guitar master. It’s all flying fur and drunken swirl from there, as the Associates rip their way through 11 more rocket-fueled tracks. Of all the tapes featured in this piece, Buckle Your Teeth is most suited to the format, raw and rough and unconcerned with fidelity in any sense of the word.

WHERE TO BUY: From the band at shows

Futo: I Wish I Had Been Born as the Rain That Forms Rivers That Carve Out Canyons
(Independent Release)

Patrick Brick follows up last year’s buoyant Dog Dreams with this ambitiously titled second effort, which continues the pop drama of its predecessor but is markedly darker in tone. Devastated by the drug-related death of a friend and after “reading a lot of Raymond Carver,” Brick crafted Canyons as a monument to love and loss. Futo fans need not worry, though: the washed-out beatscapes of Dog Dreams remain. Says Brick: “[There are] still a lot of 808s and synths and such, but with a lot of talk about dying instead of sex.” For all the potential heaviness of the central theme, Brick’s capable, crafty songwriting lessens the blow throughout. Songs like “Let’s Go Extinct” are doom-filled but sweet—full of hazy, shining melody, friendly reminders of nature’s singular inevitability.

The latest release from the prolific avant-garde outfit is one of the most potent distillations yet of the group’s decade-long sonic experiment. Recorded by Athens engineer Jesse Mangum, Visuals was designed as a meeting point for Future Ape Tapes’ esoteric, improvisational tendencies and their oft-concealed poppier side. Having expanded to a five-piece featuring co-founders Donald Whitehead and Thomas Valadez (aka Tom Visions) as well as Michael Lauden (Scab Queen), Thom Strickland (Smokedog) and Ben Millwood, the ever-evolving local collective nonetheless scaled things back on Visuals. “While [previous album] Pyramirrormid featured blown-out distorted washes, Visuals was designed to be more succinct and reined-in,” says Whitehead. “Comparatively, we used much less distortion and post-production.” In line with the tape’s name, the band designed a psychedelic “visualizer” to go along with the tunes:

The most exciting oddity to hit local shelves in a hot minute, Michigan transplant Scott Crossman’s inventive debut as Richard Gumby deserves the wider audience it will no doubt find in coming months. A striking mixture of meandering sound structures and more straightforward lo-fi pop tunes, Hardrive is billed as a continuation of the highly personal, studio-centric work of Sparklehorse’s Mark Linkous, whom Crossman cites as a musical hero. “I am ashamed of how revealing some of the lyrics are, and I wish I didn’t have to make pop sometimes,” says Crossman. “But for some reason I felt the need on this album to approach the pop song in some sort of reverent or technical way… Basically, I’m trying to pick up where [Linkous] left off, making music that purveys [various] genres and media.” Though Crossman is responsible for all the instrumentation on Hardrive, he is joined in the live setting by Kerry Jones (Phoenicians), where the pair craft snarling versions of Gumby’s more nuanced recorded output.

Wuxtry employee and sometime club DJ Nate Mitchell is known for his time in bands like Cars Can Be Blue and the excellent Cramps tribute act The De Lux Interiors. With Nate & the Nightmares, he leads members of local rock staples like Mother the Car and Free Associates in a raunchy, garage-punk revival service. Songs of Lust, Hate & Bitterness, recorded with Jesse Mangum and out recently on Augusta imprint ZAP, finds Mitchell and his band joined by multi-instrumentalist Jeff Walls (The Woggles, Guadalcanal Diary) for eight tracks of surf-inflected mayhem. It’s the kind of music your mother warned you against, and she was probably right. Tunes like the acidic “No Interest” and the maniacal “Kill U Girl”—a “really over-the-top song in similar spirit to [The Sonics’] ‘Psycho,’” according to Mitchell—feature the frontman in full-on rock-and-roll-creep mode. (There’s also a tune called “Clermont Strut,” which, you get the picture.)

Speaking of music designed to be frowned upon by parents and other moral authorities: Shehehe’s road-worn second outing is the snottiest goddamn rock record to come out of Athens in many years, a 14-song arena-punk LP full of fiery guitar solos and anthemic, pit-propelling choruses. Recorded with Kylesa’s Phillip Cope, Rock & Roll Queen is an unabashed ode to old-school punk that transcends its trappings with clever, radiant songwriting courtesy of band co-leaders Noelle Shuck and Nicole Bechill. “It was recorded in two days,” says Shuck. “We slept at the studio. So did Phillip, which was kind of awesome, like a big band slumber party, [but] with beer.” Songs like “Makeup” and the crisply titled “Fuck” are glammy and full of grit, equally concerned with sparking havoc and having fun.