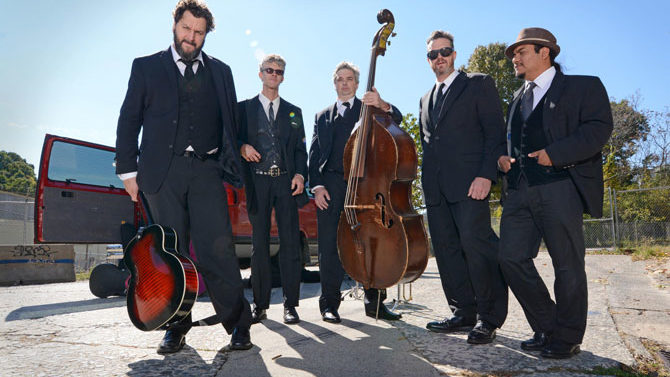 Many band reunions feel like blatant cash grabs, or worse, bad nostalgia trips. Such is not the case with 6 String Drag, the underdog Americana act that has quietly returned after nearly two decades of inactivity.

Led by songwriter Kenny Roby and bassist Rob Keller, the latter of whom is known to Athenians for his work with bluegrass outfit The Welfare Liners (incidentally, also the name of Roby and Keller’s pre-6SD project in the early 1990s), and featuring drummer Ray Duffey and guitarist Scott Miller, 6 String Drag helped establish the ’90s roots-rock scene alongside names like Son Volt, the Bottle Rockets and Whiskeytown.

The group disbanded shortly after High Hat, its members diving into the world of day jobs and families. Roby has enjoyed a fruitful solo career, releasing albums like 2013’s Memories & Birds. When he needed a fill-in bassist for a gig in support of that record, Roby called Keller, who jumped at the chance.

We knocked out 12 songs in four days, and the outcome was the same as if we were to have recorded it over weeks or months.

Soon, a connection was reestablished. “Kenny and I decided to do a record together, and Kenny wrote a bunch of songs that we could sing together,” says Keller. “As things progressed, we worked out a way to have Ray and Scott join us for the recording, and [we] decided to release it as 6 String Drag. After the album was completed, we decided to give it another go as a working band.”

Keller says there was none of the awkwardness that sometimes accompanies reunions.

“The chemistry was amazing,” he marvels. “It’s like we started right where we left off without missing a beat… We knocked out 12 songs in four days, without feeling rushed—and the outcome was probably the same as if we were to have recorded it over weeks or months.”

Roots Rock ’N’ Roll wears its heart on its sleeve, a dozen-song homage to rock’s glory days of Orbison, Berry and Holly. Raw and romantic, the album is full of sleeper standouts. “Give Up the Night” is a moody, melodic love tune rich with atmosphere. “Happier Times” avoids the nostalgia trap its title teases, a rollicking, good-spirited tune that showcases Roby’s plaintive baritone.

Keller admits 6 String Drag has “always been a tough band to pigeonhole,” explaining the group’s inability to ever really break through commercially by calling their past records “a marketing nightmare.” While Roots Rock ’N’ Roll won’t break any sales records, it is the most streamlined 6 String Drag LP to date.

“In the past, we’ve had an R&B song with horns, then a classic hardcore honky tonk country song with pedal steel and fiddle, followed by a revved-up rocker,” says Keller, “but it’s just what we like, and what we feel the songs warrant. The new album is a bit more homogenized.”

But “homogenized” doesn’t have to equal “dull,” and 6 String Drag has actually pulled off a rare creative feat, answering lofty expectations with a defiantly modest record.

And, after all, this is not the end. “There are more songs,” says Keller, “and we plan on recording more, playing live and keeping it afloat as much as possible. The next record won’t be as “neo-retro” as this one… but will still be unmistakably 6 String Drag.”