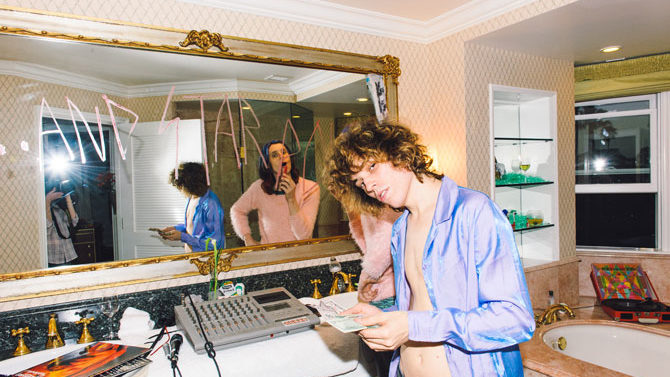 Mother Nature ain’t the only one rejuvenated when March rolls around; our music venues get a needed influx of touring-band action after being sidelined all winter with the slow-season funk. With the bulk of the big-league action from now until May already announced, we’ve pulled together 10 of our must-see shows to help guide you out of the winter doldrums and towards the sweet sounds of spring.

Check back for in-depth features on many of these acts in the weeks ahead, and bookmark our Calendar to stay abreast of all local live-music happenings.

1. Big K.R.I.T.
Wednesday, Mar. 4, Georgia Theatre
Sharp-tongued Mississippi MC Justin Scott burst onto the scene with a trio of excellent country-rap mixtapes (K.R.I.T. Wuz Here, Return of 4Eva and 4eva N a Day) before going big-time in 2012 with Live From the Underground, his Def Jam debut. On that record, Scott seemed distracted by lofty expectations, but last year’s Cadillactica found him ready for primetime. The hard-hitting, Afrofuturist LP channeled OutKast, Funkadelic and UGK in equal measure, looking to the outer limits while maintaining a gritty, deep-South vibe.

2. of Montreal
Thursday, Mar. 5, 40 Watt Club
Kevin Barnes has found a new groove. Having all but abandoned the thematic, musical and lifestyle excesses of mid-aughts of Montreal, the group’s last couple records—2013’s Lousy with Sylvianbriar and the upcoming Aureate Gloom—have been stark, uncompromising affairs. Gloom, out Mar. 3 via Polyvinyl, features the same skeletal lineup that lent Sylvianbriar its gutty garage-rock edge, though the new album incorporates a tad more of the project’s onetime porno-disco luster.

3. Modest Mouse
Monday, Mar. 9, Georgia Theatre
The crown jewel of the spring concert calendar was just announced last week and has already sold out, but we’ve gotta give it a couple inches, because we’re more than a little pumped to have Isaac Brock and company back in Athens after more than 10 years. The Pacific Northwest indie rock icons are touring behind the long-anticipated Strangers to Ourselves, out Mar. 17. Expect also to hear an earful of material from the band’s early-aughts apex, The Moon & Antarctica, as well as crossover hits like “Dashboard” and “Float On.”

4. Hiss Golden Messenger
Tuesday, Mar. 10, Caledonia Lounge
M.C. Taylor slogged through personal and career setbacks only to finally find a home in North Carolina’s Research Triangle and at Durham’s Merge Records. That bastion of independent music proved a perfect landing spot for Taylor’s Hiss Golden Messenger project, which reached peak folk-rock form on last year’s sleeper standout Lateness of Dancers; the album should appeal to fans of Wilco and the Dead alike. On the record—guitar virtuoso William Tyler and members of Megafaun guest—quiet despair is replaced by sunlit promise.

5. Buckwheat Zydeco
Saturday, Mar. 21, The Foundry
The pride and joy of Lafayette, LA, Stanley Dural, Jr., aka Buckwheat Zydeco, graces The Foundry’s stage in March for a set of Cajun-flavored, accordion-driven barnburners. A friend to and favorite collaborator of folks like Ry Cooder, Eric Clapton and Dwight Yoakam, Dural’s music is inextricably linked to his home state—both its myriad riches and painful memories; Buckwheat Zydeco’s version of “Cryin’ in the Streets” remains one of the definitive post-Katrina musical reflections.

6. Slingshot Festival
Mar. 26–28, various locations
Athens’ newest multi-day multimedia extravaganza returns for a third consecutive year in late March, and all signs point towards the 2015 edition of Slingshot being its biggest and baddest yet. Anchored by names like James Murphy, Jamie xx and Nosaj Thing, and featuring highly inventive undercards including Reptar (who will be celebrating the release of a sophomore LP), Juana Molina, Omar Souleyman and Holly Herndon, the fest’s electro-heavy music portion promises to be an affair to remember.

7. Run the Jewels
Saturday, Apr. 4, Georgia Theatre
The hottest duo in hip hop features two dudes who have been around the block and back. Atlanta’s Killer Mike was an early Dungeon Family favorite; recently, he has assumed the role of an increasingly apolitical rap scene’s outspoken conscience. New York native El-P’s early work with Company Flow and career as owner and star of indie label Def Jux established him as a standout in a crowded Brooklyn scene. As Run the Jewels, the two men attack cultural ills with passion and fury, creating blown-out, blasphemous tracks that show no mercy or remorse.

8. Future Islands
Wednesday, Apr. 15, Georgia Theatre
Future Islands’ rise to the top of the indiesphere has been fun to watch. Scene heads who recall the Baltimore-based band wowing tiny crowds at local DIY spots a decade ago might have been shocked to flip on the tube last March to see the group making a new, high-profile fan in “Late Show” host David Letterman. But Future Islands’ ascent wasn’t terribly hard to predict; frontman Samuel Herring’s maniacal yet tender stage presence is the cherry on top of the band’s irresistable synth-pop sundae.

9. Foxygen
Friday, Apr. 17, 40 Watt Club
Specializing in throwback psych-pop jams of the skewed Summer of Love variety, California’s Foxygen does successfully what many similar-minded acts (MGMT, anyone?) have not seemed to manage, blending equal parts irony and appropriation with a heavy dose of serious songcraft. The band’s latest album, the crazily sprawling …And Star Power, cast the group as would-be saviors of modern psychedelic rock, tuned in and turned up.

10. Peter Hook & the Light
Tuesday, Apr. 21, Georgia Theatre
This one’s for the old folks and the youngsters who wish they’d been there: Joy Division/New Order bassist Peter Hook hits town this April for a performance of the former group’s two classic LPs, Unknown Pleasures and Closer. It won’t be quite the same as witnessing Ian Curtis’ scowl (or his wonderful dance moves) up close and personal, but Hook, a legend in his own right, will surely bring the goth-punk groove.