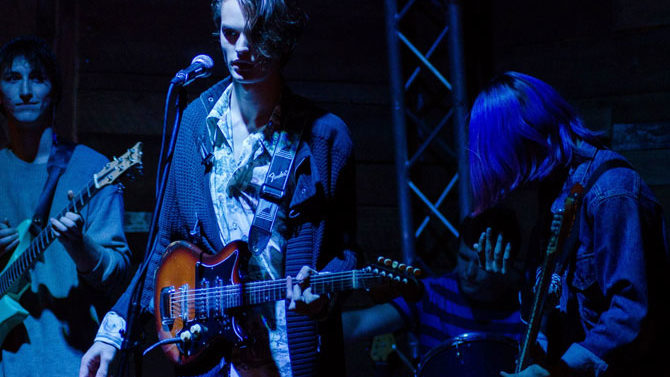 James Warrior and Adriana Thomas saw a problem: Athens is filled with musicians, painters, dancers, photographers, sculptors, actors, writers, graphic designers and performance artists, but rarely do creators from the different forms join together in performance.

There are one-off collaborative house parties, infrequent Bulldog Inn events and curios like the now-defunct Cunny Isle Bemusement Park, where artistic multiplicities might be found, but those synergistic moments are rare and quite often occur off the beaten path. Warrior and Thomas aim to change that, with recurring events where artists can meet, share and create.

Thomas’ project, Myriad, is “a festival of music, visual arts and interactivity… where artists can build a network, share ideas, collaborate, practice their art in public and learn from one another,” Thomas explains. For Myriad, which has occurred every other Tuesday at New Earth, a band and an artist are coupled.

“The artists and musicians are encouraged to participate through the creation of live art and interactive musical performances,” says Thomas. The band and artist are the focus for an hour or so, after which time “the stage opens up for an open jam, during which members of the audience are invited to play.”

Thomas was assigned the task of bringing Athenians out to New Earth, which clings to the periphery of downtown and often gets overlooked.

“I decided I wanted to do something collaborative, something fun and interactive,” she says. “It’s so often that you go to shows around town, and there’s all sorts of music and all sorts of art, but on a regular basis you don’t see something that integrates both—and in a way that would interact with the crowd, would allow people to get involved and get their hands dirty.”

Thomas sees Myriad as a space where artists can flourish, whether they are experienced or exploring artistic expression for the first time. (Thomas is an aspiring visual artist herself.)

“Practice for Slingshot; try something you’ve been afraid to try; show off your exit exam,” says Thomas, who hopes that the active and inviting space “will inspire people who maybe have been toying with an idea” and grow Athens’ already fertile art scene.

While Myriad is a free-form “open jam of art,” Warrior’s Athens AMP is a more curated event. “Myriad is the cultivation, where Athens AMP is the orchestration,” he explains. “The purpose of AMP is to take a band and build an entire show around them over the course of two months, where we integrate a minimum of three additional mediums into their performance.”

Warrior establishes the roster of artists far in advance of the event, and the artists and musicians weave together a thematically integrated performance. At the debut November performance, Powerkompany provided the soundtrack, while a video projectionist bathed the scene with his work and dancers and a visual artist performed aside and amongst the band, all in thematic accord.

Athens AMP events will be unique offerings. The mood and character of the November performance emerged out of Powerkompany’s smooth, ethereal, synthy sound. The canceled December event would have found an entirely different aesthetic course, with riff-heavy Chief Scout providing the soundtrack. (Recently signed to Columbia Records, the band ran into unpredictable scheduling conflicts.)

January’s Mothers-led performance will engender yet another sort of experience for the audience. A hip hop act might be featured in the coming months. Warrior hopes to continue finding exciting combinations to make each Athens AMP special.

Recognizing the kinship between the two events, Warrior and Thomas recently decided to align their efforts. Though the two will remain separate, organizers hope to bring more attention to both events and strengthen participation among artists and musicians.

The two have big plans for 2015. A two-day AMP/Myriad collaboration will kick off the year in January, with artists joining local bands Mothers and Tongues at Flicker on Jan. 6 and 7.

WHAT: Athens AMP/Myriad
WHERE: Flicker Theatre & Bar
WHEN: Tuesday, Jan. 6 & Wednesday, Jan. 7
HOW MUCH: TBA