The Glands Return. Again. Kinda: A Q&A With Ross Shapiro 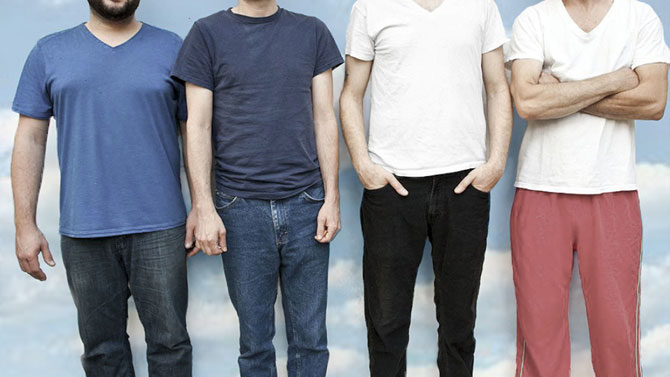 The Glands are awesome. Anyone who owns a copy of either of the group’s albums—1998’s great Double Thriller and 2000’s near-flawless The Glands—knows this to be fact. I say “are,” because The Glands never broke up, nor did they ever reunite. Yet over the last 10 years, the Athens-based group has only appeared onstage a handful of times—at the Georgia Theatre’s 2011 grand re-opening, or at AthFest 2012, where that event’s chronic main-stage sound issues marred an otherwise fine set.

In spite of the band’s hermitism—or perhaps in some small way because of it, but mostly because of its music, a fine-tuned blend of no-nonsense 1970s pop-rock and endearingly evasive ’90s indiedom—both albums have become cult favorites here and abroad, even if they’ve never quite achieved the appropriate level of recognition across the board. “The Glands” has become one of those names cited by better-known artists in interviews, a semi-secret morsel of musical intrigue ready to be gobbled up by nerds and webgazers alike.

Anyway, the news is that The Glands are back. Again. I know. But maybe it’s different this time? The group will play two shows over the course of the next five weeks: first, a sold-out show this Saturday at Green Room, and then UGA’s free outdoor Spotlight on the Arts concert Nov. 8. And maybe this is burying the lede, as we say in journalism, but there’s talk of a third LP on the way, set to arrive nearly 15 years after that self-titled record.

Glands frontman Ross Shapiro, the former owner of the sadly defunct Schoolkids Records and an enigmatic, Yeti-like figure on the local scene, was initially reluctant to do an interview to mark the band’s latest return, because, as he put it, “Whenever I talk, it makes me realize what a dick I am.” After some mild wrangling, he agreed to a chat via Facebook’s Messenger app. The conversation is reprinted below with some minor editing.

Gabe Vodicka: Hey Ross, you got a few minutes?

Ross Shapiro: Let’s do this.

GV: I’m glad you’re fired up. I’ll try to make it as painless as possible.

GV: I guess the most obvious question is: What’s the state of The Glands? You guys have popped up here and there over the last few years, but there hasn’t been a consistent presence.

RS: Consistently inconsistent. We’ve been dicking around with some recordings, and we’re playing twice in town in a short span, which is about as much of us as we can handle.

GV: So folks shouldn’t view the fact you’re playing two shows in as many months—after not playing in two years—as any kind of sign?

RS: Um, I’m not really sure what it would be a sign of. Other than when we first started playing out, I think we never really played that frequently in town. How many times can you ask your friends to come see your band?

You read comment sections where people assume that, yeah, you give your music away for free, but you’ll make it up in touring. That’s total bullshit.

GV: But it’s not just “your friends” who are interested in the band. The Green Room show sold out in a day.

RS: I like to think that anyone that comes to see us are our friends. We’re excited about the Green Room show—and a lot of that is because we don’t get out much.

GV: What I mean is, it seems like there’s a renewed interest in The Glands, particularly among a younger crowd who weren’t around for the early run. Do you sense this at all?

RS: Personally, I’m kind of a hermit, so I don’t interact with people that much. When someone asks me what my band is up to, I assume they’re just being courteous, like when your uncle asks if “The Grands” are still playing music. It is flattering if people are interested, though.

GV: What’s your assessment of the Glands discography—particularly the self-titled album, now that we’re nearly 15 years removed from its release?

RS: Hmmm—I guess it has been that long? I should really get busy. I don’t know how to assess it. It was fun recording it, because we could try all sorts of shit, and the line-up, with Doug and Craig and Frank and Joe and Viktur, could come from so many angles. The first record—one day soon, we’re going to put out a proper mix of it—really puts me in a particular place, because of what the recording environment was like, and we had no expectations.

GV: Do you feel the same chemistry and excitement working on the new stuff?

RS: I do. Completely different environment, because we’re doing it in my house.

GV: Is there a timetable for the new album’s completion?

RS: Six years ago… or soon?

GV: Hopefully soon. How closely do you pay attention to what’s going on in the wider world of music? The Glands’ sound has always been very insular, I think in a nice way, but you did run a record store, so I assume you were at least somewhat up on the trends of the day.

RS: I don’t know. I hear new music all the time, and some of it might have been made 40 years ago and some might have been made yesterday, and it’s all new to me. Having a record store was great, because the patrons turned me on to far more than I could ever turn them on to. It was also like junk shopping—only, the junk was being brought to me.

Whenever I’d clean the records, I’d listen to everything, and you could find so much golden shit. I think great stuff is made every day—it might take me a while to find it, but… As far as the music industry, every year when I watch the Grammys, I think, “Today is the day the music died.” But if I avoid that and just search out the stuff that pleases me… What do you think?

GV: Yeah, I have to remind myself most of what the Grammys have extolled, historically, has been bullshit. There’s still a ton of exciting music being made, and equally exciting ways for bands to release it: Bandcamp, etc. Of course, sites like Bandcamp don’t exactly help brick-and-mortar stores like Schoolkids. What’s your take on the industry from that perspective?

When someone asks me what my band is up to, I assume they’re just being courteous, like when your uncle asks if ‘The Grands’ are still playing music.

RS: There’s no going back. I think it’s harmful to music in the long run—sometimes it takes a band a few go-arounds before they hit their stride, and the environment now makes it harder for artists to forge ahead if they have no monetary success from the start. You read comment sections where people assume that, yeah, you give your music away for free, but you’ll make it up in touring. That’s total bullshit. If you’re a good band starting out and want to tour, you might start out playing to 15 people in Chapel Hill and then drive the six hours to play at the Caledonia to 15 people, and you’ve probably just lost several hundred dollars in gas and lost wages from your restaurant job and all the other costs involved. I would guess that most of the acts that people love, pre-2000, wouldn’t have survived this. I could go on and on. I’m sure it makes me sound like an old codger (if I wasn’t already). I like to go to besteveralbums.com and compare years. It may just be me, but I think the quantity of good stuff becomes less and less because of this environment.

GV: There’s probably truth in that. Does that environment discourage you from wanting to continue pursuing music as a career?

RS: It discourages me as a music fan. I can always make music, even if it’s just for me, and enjoy that. “Career” is kinda a foreign concept. Look at me—I’ve turned a conversation about our excitement to play a show into a bitch session. Typical.

GV: Haha. I don’t think it comes off as bitching. It’s a tricky topic, and there aren’t any easy answers. We can wrap this up shortly. Stop me if you’re busy, or if I’m intruding. What’s your daily life like when you’re not working on music?

RS: Not very interesting. I sell some music online. Do some work for the [Georgia] Theatre. Drink a lot of coffee. Monday nights, I play Rock Trivia at Little Kings—it’s the highlight of my week. You should get some friends together and come play. Once in a while I DJ there. Other than the music stuff—pretty uneventful.

GV: I’ve done the rock trivia a couple times. It’s fun. But you guys are the unbeatable team, no? Have you ever lost?

RS: We lost in a tiebreaker last night. The final question concerned the nine Rolling Stones albums that went to No. 1. The tie-breaker was how many Madonna albums went to No. 1. We low-balled it and lost.

GV: Damn. Glancing at her discography, I’d guess five. What was the answer?

GV: Haha. Wait, albums or songs? Either way, maybe I should not play R&R trivia.

RS: Albums. The lesson is, fuck Madonna (I say that as a fan).

GV: There’s the lead quote for the story right there.

GV: Anyway, I’ll let you get back to your day. Final question. True or False: There will be a new Glands album on the market by this time next year.

GV: Goddamn good news! Thanks for chatting for a spell.

RS: Thanks Gabe—enjoyed chatting with you.

WHAT: Big Star Third Live, The Glands, New Madrid, Ruby the RabbitFoot, Blacknerdninja
WHERE: College Square
WHEN: Saturday, Nov. 8, 4–10p.m.
HOW MUCH: FREE!