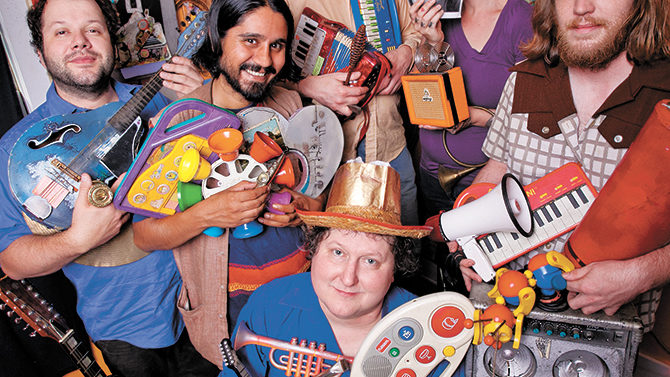 
Interviewer: Can you see there being another Circulatory System album in the future?
Bill Doss: Let me look into my Magic 8-Ball… Ah, yes, here it is: Outlook likely.
—Rocksucker, Nov. 11, 2011

A specter hangs over Mosaics Within Mosaics, Circulatory System‘s new double album, released in June via Cloud Recordings. Elephant 6 founder and Olivia Tremor Control mastermind Will Cullen Hart’s corporeally named side project has come and gone at will since its inception, releasing two full-length collections of dense, challenging pop—2001’s self-titled album and 2009’s Signal Morning—only to drop out of sight after each album for an ensuing period of years. Behind the scenes, the band’s various contributors have stayed preposterously busy—our sympathies to John Fernandes’ day planner—even if some of them, like cellist and in-demand session player Heather McIntosh, have scattered to far corners of the continent.

In fall 2011, Bill Doss, Hart’s longtime friend and Olivia Tremor Control bandmate, gave the above quote to an online magazine. Concerns about Hart’s health—he was diagnosed with multiple sclerosis not long after the release of Circulatory System’s debut and continues to battle chronic pain and crippling fatigue—no doubt underlay the interviewer’s question, even if it wasn’t made explicit.

Doss died unexpectedly the following summer. It should be noted that most of the songs on Mosaics Within Mosaics were written prior. Still, it’s hard not to read the E6 linchpin’s death into the album’s lyrics, which are highly concerned with the abyss. Hart’s poetry is microcosmic; he navigates infinity by examining the “spaces between”; the “young rocks on the shore.”

Yet the record also seeks peace. “I had already had [a friend die],” says Hart, referring to The Gerbils’ Will Westbrook, who passed away in 2006. “That destroyed me. When Bill died, I could deal with it a little better. Yeah, it’s fucking heavy. We miss that sweet man. But he would want us to keep going.”

Derek Almstead, the drummer and engineer tasked with assembling Mosaics from reams of source material, says the album’s structure was informed by loss.

“I wanted the record to feel cathartic,” he says. “That’s a general vibe I was trying to create. It starts off with this upbeat feeling, but then it takes you into this pathway of emotions, and then it ends with this loving release.”

That release is the closer, “Elastic Empire Coronation,” a long-forgotten Hart tune, whose title was penned in typically off-the-cuff fashion by Doss and which Almstead says revealed itself to him in a dream. Indeed, much of the music that eventually became Mosaics was conceived of and recorded 15, even 20 years ago.

“In 2002, when I joined the band, Will handed me this,” Almstead says, producing a weathered manila envelope full of colorful, handmade CD-Rs, each one loaded with years-old snippets of half-formed pop songs and meandering sound collages. “We went on tour immediately after that, and I would sit in the van and listen. I think I managed to get through every CD on that tour. I didn’t actually take any notes, but I at least absorbed a good bit of it.”

As time passed, Hart moved on from that early material, though it continued to burn in Almstead’s brain. Last year, after approaching Hart with the idea of assembling the best bits into a third Circulatory System full-length, Almstead spent a month culling the hundreds of recorded ideas to “130 or 140” potential songs. With Hart’s assistance, he further narrowed it down to 30. The addition of “Elastic Empire Coronation” solidified the tracklist, though the album’s sequencing was another matter.

“It was a lot of gut stuff: ‘I love this song, it’s got a certain vibe, let’s put it in there’,” says Almstead. “I’d sit there and stare at it for hours, and try stuff and move things around—and fail, a lot of times. But I’d think about it for a couple days and [figure it out].”

Mosaics is sprawling, but also patient and revealing. One is reminded why Hart and his E6 colleagues—like Jeff Mangum, who contributes to the album—are considered pop geniuses by many critics; no matter how unwieldy the starting point, they find in songs their necessary and effervescent cores.

“When Will’s in the studio and I play something for him, he’s instantly clear about [what he wants],” marvels Almstead. “We knocked out the overdubs over a month. We did a lot of spectral filling, like, ‘OK, I don’t wanna hear a bass line, but it would be cool if there was a low element’.”

Studio trickery has always played an important role in Circulatory System’s music; it has never been more apparent than on Mosaics. Since many of the original sources consisted of nothing more than “a verse and a chorus,” says Hart, “we’d double the recordings and add different things on the second part.” A litany of overdubs, courtesy of de facto band members Fernandes, Pete Erchick, A.J. Griffin and McIntosh, as well as a host of colleagues, including Mangum and his Neutral Milk Hotel bandmate Jeremy Barnes, fleshed things out even more.

Though it began as an intimate document of Hart’s psyche, during the actual construction of the album, he says, “I wasn’t in the studio all the time, because I didn’t need to be. [The material is] really personal to me… I didn’t want to get too immersed in it 14 years later.”

Because he handed control over to Almstead eagerly and early on, Hart adds, he is now able to absorb and enjoy the record as a listener, rather than fret over whether an instrument is at the proper level in the mix or an arrangement perfectly placed.

“Does it seem like a dream/ That we’re never gonna wake up from?”
—Circulatory System, “Stars and Molecules”

The “transparent dream” Hart, Doss and company pursued with their early forays into home recording is, in many ways, alive and well. Elephant 6’s unique blend of bedroom psych and sun-stained pop has proven incredibly influential over the years; one can hear echoes of the Olivias and Circulatory System in the music of countless festival-headlining, platinum-selling “indie” acts—Animal Collective, Tame Impala, Deerhunter and The Arcade Fire, to name just a few.

“I can’t believe it, in a way,” Hart says. “But it’s on a minor level. Yeah, we’ve influenced stuff. We had no problem with Nirvana, or anything like that. But we were just into psychedelic music. We wanted to bring that into the fore.”

Just as the OTC and Circulatory System took unapologetically from the Beatles, the Velvets and Pet Sounds, those younger groups draw from the E6 well, albeit to varying degrees. But the results are rarely as compelling, or as convincingly “psychedelic,” a term that has lost meaning as it has become increasingly commodified.

Mosaics—as with most E6 albums, it’s a headphone record through and through—reminds us what psychedelic music sounds like. Songs flow unstoppably from one to the other, the life cycle in sonic form. Floaty, viscous tunes like “When You’re Small” transmit warmth even as they reveal terrible truths. The largely instrumental, highly exploratory “Mosaic” series that intersects the more pop-oriented tracks functions as a palate cleanser (and is a reminder of Hart’s versatility).

Thirty years ago, Mosaics might have been regarded as a masterpiece, but it’s hard to say what sort of impact such a record can have on the current musical landscape. Now, Almstead admits, “psychedelic music is so ubiquitous.” Still, he adds, “I don’t ever think about that stuff. There are more records to be made.”

Among those records, in case you were wondering, is a planned Olivia Tremor Control double-LP, consisting of material recorded with Doss before his death, as well as songs still in the works; The Apples in Stereo’s Robert Schneider is filling in for the late songwriter on the unfinished tracks, “as were his wishes,” says Hart.

A sneak preview of a couple songs reportedly being considered for the album—there is absolutely no time frame for its release, Almstead stresses—suggests a more streamlined sound for the band, which famously devoted 23 minutes of its acclaimed 1996 debut to a single sprawling experimental suite.

Doss-penned tunes like “Garden of Light” are surprisingly straightforward in their pop-rock construction, though there are no doubt layers of overdubs still to be added. The lyrics to that particular song revolve around a wolf whose “smile radiates a garden of light.” But, Hart says Doss once told him about the song’s beastly protagonist, “he’s a trickster.”

Maybe this is the core lesson of Elephant 6, what the collective has most contributed to our creative consciousness: that things are never quite what they seem, even when they are. When the melody is brightest, there are uncertainties under the surface.

It’s hard to imagine what “psychedelic music” will look and sound like 30, 40 years down the road. But Hart believes people will still appreciate what he and his cosmic colleagues brought to the table.