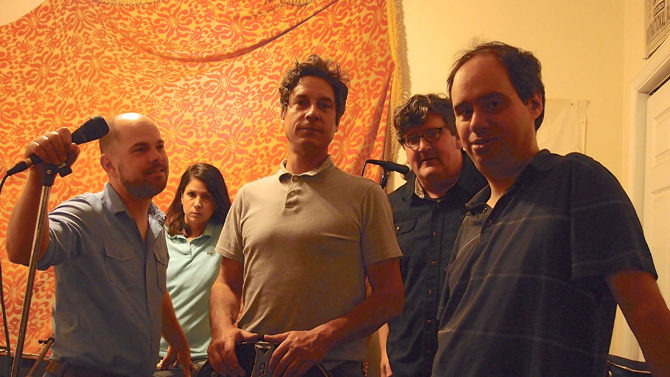 If there’s a phrase more hoary than “end of an era,” it’s yet to be found, but when it’s true, it’s very true. It was almost 12 years ago that the Atlanta-based garage-rock group the Rock*A*Teens played its next-to-last show. That Caledonia Lounge performance, the final notes of which rang out into the early-morning air of New Year’s Eve, not only signaled the end of a band but the end of—well, you know.

The split was the final withering away of perhaps the most seamless melding of the Athens and Atlanta music scenes ever to happen. As then one of the last remaining bands from the pre-gentrification Cabbagetown scene, the Rock*A*Teens quickly found a second home in Athens. This week, we’ll get the chance to welcome them home again when they play the 40 Watt Club.

In early June, the Teens—whose current lineup consists of frontman Chris Lopez, Michelle DuBois, Justin Hughes, Will Joiner and former Flagpole music editor and current contributor Ballard Lesemann—played two back-to-back shows at Atlanta’s EARL, and Chunklet Magazine released a vinyl reissue of what had previously been a CD-R-only compilation of live performances circa 1998 and ’99, named A Major Motion Picture. Attendees treated the entire affair like a big family reunion.

But why the reunion? Or, more specifically, why now?

Drummer Lesemann says North Carolina’s Merge Records initially asked the band to play the label’s upcoming 25th anniversary celebration, and the pieces started coming together after that. (The label also recently re-released the group’s 2000 album, Sweet Bird of Youth, as a double-LP.)

“It’s been really sort of a strange phenomenon,” says Lesemann. “I’m glad it’s happened. It’s been sort of like a big class reunion, except there’s a project involved.”

During its initial existence, the Rock*A*Teens never quite gained a substantial following outside the Southeast, but the distribution and promotional heft provided by Merge certainly exposed the band to what would become a cult audience.

The group’s sound is most immediately characterized by mountains of reverb, so much that at times it sounds like the band is inside a closed room at the end of a long hallway and the listener has just happened to sneak upon it. (“Reverb-soaked” is yet another cliché, but again, here it’s just plain accurate.)

Divorced from a surf-rock context, though, this reverb, along with Lopez’s urgently emotional vocals and the forceful, rhythmic thrust of the whole thing can make listening to the band cathartic—but it’s never an escapist experience.

“If I can be quite honest, as I’ve revisited [the songs], there are some that I can remember [what] this or that was about, and I can revisit that feeling. But the majority of them mean completely different things to me now,“ says Lopez. “They’re even more personal.”

As of now, the Teens’ plans include the group’s six remaining scheduled shows—the last ones are in New York on Aug. 9 and 10—but discussion has already shifted towards the possibility of heading out to other towns the band enjoyed playing in its early years, such as Chicago, Los Angeles and Seattle.

Even though future plans are loose—and both Lopez and Lesemann hint at a very minor possibility of actual new songs being composed—it’s probably best not to bet on any one expectation. Listening to the group’s back catalog, it’s clear the Teens never banked on any future. They did, however, experience the now as it happened, embracing the immediacy of the passing moment, whether it was joyous or painful.

The reunion has been nothing but the former, and Lopez is clearly anticipating this weekend’s Athens appearance.

“For me, I have a lot of friends there, and a lot of memories of Athens from bands that I’ve played in. It’s been a long time, and I’ve lost touch with people, but I’m sure I’ll see a lot of them. I’m really looking forward to it. I think it’s gonna be a great time.”