Catching Up on Local Experimental Sounds 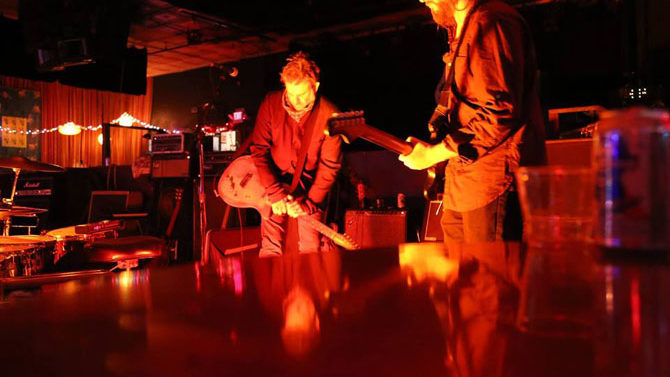 Even within the realm of “experimental” music, the work of Pedestrian Deposit is hard to categorize. Over the course of its nearly 15-year existence, Jonathan Borges and Shannon Kennedy’s electro-acoustic project has spanned the entirety of the outer-music spectrum, from tape collage and harsh noise to modern classical and drone.

It will be supported by a cast of locals, including tape destroyer Grant Evans; guitar-centric experimenters the 19th Brood, which features erstwhile Athens folk fixture Don Chambers; Mother’s Arms, a new collaboration between Sam Frigard and Robert Ashley, known for their synth-pop project I Come to Shanghai; and Lock, a new duo featuring Leslie Grove of free-jazz group Rainy Taxi and Rachel Evans of Motion Sickness of Time Travel.

The local acts on the bill represent a shift that has increased in speed and purpose over the course of the past year. A Flagpole cover story from last April examined Athens’ “new underground,” a loose collective of forward-thinking musicians who aimed to redefine the Classic City as something other than just an indie rock mecca.

“I don’t know if there are even that many [musical] commonalities,” Martian, the leader of psych-worldbeat outfit Cult of Riggonia, was quoted as saying. “It’s more that we can relate about maybe thinking about music a little differently than a lot of other bands in town.”

These events are united by their stated focus and departure from the sounds that typically characterize Athens’ bar scene, but the content is wildly divergent. Many local acts embrace cool, crystalline drone (see: Aprotag, Gyps, Terminals) while others skew toward glitchy, beat-damaged or otherwise purposefully fragmented sounds (Hand Sand Hands, Scab Queen). Still others, like longtime sound explorer Killick Hinds, who has thrilled and perplexed local audiences for years with his homemade instruments and painstakingly cerebral compositions, take a more organic, acoustic approach.

But when it comes to moving Athens beyond its college-rock fixation, not everyone is convinced this vastness and variety indicates true progress.

Grant Evans, the co-founder of underground label Hooker Vision—a fixture in the international tape-trading community—says he feels “conflicted” about the development. (In addition to Hooker Vision, Evans runs VAALD, a tape imprint focused on the darker side of noise and drone that continues to churn out quality minimalist releases, including Terminals’ self-titled debut, a downcast selection of synth tones, and a “raw, hateful” upcoming demo from new local black metal project Negative Crown.)

“On the one hand, it’s great that some of the younger generation is exploring this style of music, and it’s always nice to meet like-minded individuals,” says Evans. “But I also feel like there’s a big divide between two schools of thought. You have the kids who like to party, and this is just a new means to that end for them. On the other hand, you have people who aren’t interested in the social aspects at all, who would rather work on recordings at home.

“It does seem like more people are being a bit more open-minded about this kind of shit, though,” Evans adds. “When [wife Rachel and I] played some of our first shows in town, I think a lot of people were confused or just turned off by seeing a guy surrounded by tape players making weird non-music… I’m curious to see how it develops further, and I hope that the people with a newfound interest in this kind of thing don’t stop searching for weirder, more confusing noise.”

Other key figures in Athens’ experimental renaissance have a more rosy take on the resurgence. “Athens is a sum of its parts,” says Madeline Hassett, a UGA Music Business student and WUOG DJ and the curator of last month’s Experimental Mondays series.

“There are a lot of really cool sounds being made, and it’s really wonderful to know that people are listening for growth,” she says. “These sounds and shapes and dreams from some of the more odd creators in town offer something rock or pop can’t touch.”