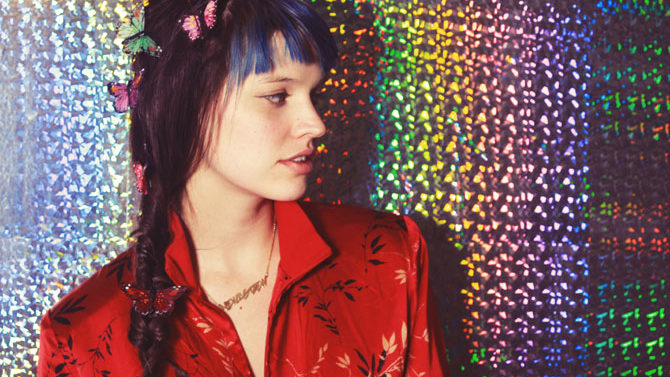 She’s ostensibly here to discuss her upcoming album, New as Dew, but Ruby Kendrick would first like to talk about rediscovering a childhood obsession. “I’ve been listening to Boyz II Men,” she says with a grin. “I just wanted to remember what it was like.” And you can forget all that baloney about nostalgia being unreliable, she adds. “It’s so good.”

Kendrick sees most things through rose-colored glasses. It’s what makes her curious decision to switch from recording and performing under her birth name to doing so as Ruby the RabbitFoot slightly less, well, curious.

“I guess I’m pretty superstitious,” she says. “I was feeling optimistic, pretty blessed. It was just kind of an uplifting nickname. [I thought] maybe it could help me out later on.”

“Later on” is now. New as Dew, out Mar. 18 via Normaltown Records, is as convincing a breakout statement as Athens has seen in years. While Kendrick’s 2012 debut, No Weight No Chain, offered a glimpse of the songwriter’s prowess, it was weakened by her distracting diffidence. Likewise, her live show at the time left something to be desired. “Her timid stage presence, combined with the steadfastness in her voice, borders on cloying,” read a 2011 Athens Banner-Herald article.

As evidenced by a recent live performance, and from the beginning of New as Dew, it’s clear she is not the same artist in 2014. The album’s lead single, “Ways,” kicks things off in understated form. An acoustic guitar rings lazily out, before Kendrick delivers one of the most beautifully acerbic opening couplets since Fiona Apple’s “Criminal.”

“I know you’re probably thinking of ways to be good to me,” Kendrick sings. The knife twist is practically audible. “But let me help you spare your precious energy.”

The new record brims with confidence, from the full-band approach and thick-sounding production—backers include White Violet’s Nate Nelson and scene vet Jeremy Wheatley along with bassist Frank Keith IV; the album was tracked with Nelson at his downtown studio and mixed by Drew Vandenberg at Chase Park Transduction—to Kendrick’s much-improved songwriting. (“Ways” isn’t the only track to feature a show-stopping couplet; the sunnily depressive “Misery” boasts a slew of ’em.)

“I kind of felt like I didn’t really dig deep with it,” Kendrick says of No Weight No Chain. “I was very unsatisfied.” This time around, the hapless, lovelorn narrator of that record is nowhere to be found. Lyrically and musically, New as Dew is a step forward, although in one key way, it’s actually a step back: Kendrick’s stated bout of reminiscence seems appropriate, given the 1990s-college-pop vibe that colors much of the record.

Some of that era’s more questionable proclivities do appear, but they mostly go over surprisingly well. The title track features an unexpected but honest-to-goodness spoken word segment, which should fall poetry-slam flat but somehow has the exact opposite effect. More straightforward (but no less enchanting) songs like “The Shelf” would have been easy and obvious standouts on CMJ samplers of yore.

Meanwhile, “Obsession” sounds primed for an Apple commercial or some such, with its earworm keyboard loops and swirling, glassy choruses. The tune is not the LP’s strongest, but it is a fine example of just how far Kendrick has come since her previous outing. Backed by the talented band, her presence is instantly boosted. And though the song is about love gone wrong, mystique has long since displaced self-pity, as evidenced by the song’s winking chorus: “You may never know/ Who I’m working for.”

I would really like to explore my inner diva.

And the best, it seems, is yet to come. Since finishing New as Dew, Kendrick has progressed into more mysterious territory. Last October, she leaked a single called “Coffee & Honey,” complete with a colorful, lo-fi music video. The song oozed through three minutes of sultry slowcore-soul, Kendrick’s vocals slinking alongside a trip-hoppy drum-machine beat.

As the first piece of music she had unveiled since No Weight, it was an unexpected, experimental delight. The attractively unglued track represented a whole new direction for Kendrick, a journey to the center of her R&B-obsessed roots and a convincing showcase of the raw vocal talent that had only been hinted at previously. Many, including Flagpole, assumed it was the first taste of New as Dew—but when advance copies of the record went out, it was nowhere to be seen.

“I felt like I hadn’t released anything in so long. I had been working on [New as Dew], and it takes a long time for a label to put out an album. I was like, ‘I’m gonna go crazy.’ So I just made that at home, and put it out.”

Kendrick says to expect more along the lines of “Coffee & Honey” in the future. “I would really like to explore my inner diva,” she says. Still, she adds, “I don’t wanna rush it, because I should spend time touring with this record. I write songs a lot. So, by the time I get to make a record, a lot of them are gone.”

Armed with the considerable support of her label, Kendrick will travel westward for a handful of performances at this year’s South by Southwest festival. Unlike last year, when plans to play Austin were derailed by the intervention of a last-minute invitation to open in Atlanta for Thao & the Get Down Stay Down—one of Kendrick’s favorites—she plans actually to make it there this time.

Even with the label support, though, she is realistic about what playing SXSW means in the modern age. Due to the democratization spurred by emerging technology or an exponentially increased corporate presence, or both, the event has long shifted from its original purpose as a vehicle for unknown bands to be scouted by industry folk. (As an eye-opening example of how it has changed since its bootstrap beginnings, in 2013 the festival had a reported economic impact of over $218 million.)

“It’s what you make it,” Kendrick admits. “If you go and are like, ‘I’m gonna network the fuck out of this,’ then you probably will. But if you’re going to eat tacos and get a suntan, which is probably what I’m gonna do [laughs]… It’s just so fun. It feels like every band in the country is there.”

That last bit is not really too far-fetched; in Austin, Ruby the RabbitFoot will be a blip on most attendees’ radar. Still, the few folks who happen upon one of her sets will undoubtedly count it as a pleasant surprise. One might even say that, out of the vast many, they are the lucky ones.

Ruby the RabbitFoot plays Friday, Mar. 21 at the Caledonia Lounge as part of the Athens Slingshot festival. In Austin for SXSW? Catch her on Thursday, Mar. 13 at the Threadgills day party, 2 p.m.; Thursday night at the Velveeta Room, 9 p.m.; or on Saturday, Mar. 15 at Side Bar, 1 p.m. Check Homedrone for Ruby’s exclusive tour blog.