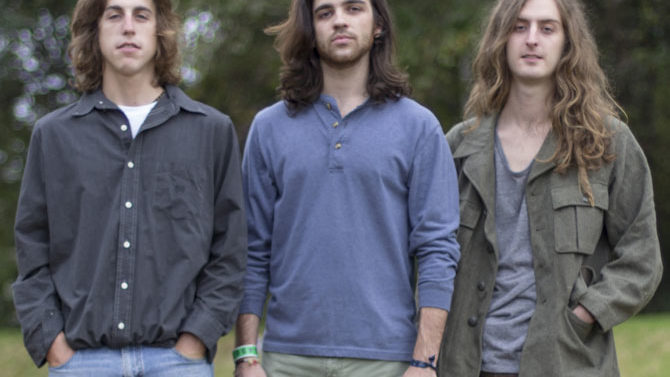 Athens-via-Waycross trio The Woodgrains—winners of the 2013 Flagpole Athens Music Award for Best Rock Band—have been making noise in town since 2009, combining recognizable classic-rock guitar tropes with CSNY-style vocal harmonies. But the band’s history goes much further back. Friends from a young age, these three “skateboard rats” played together in the middle-school band and discovered new music—perhaps most formatively, the sweetly complex country sounds of another Waycross native, Gram Parsons.

Though it clearly owes to 1960s and ’70s rock and pop, The Woodgrains’ self-titled new sophomore record, which the band describes as “a lot riffier” than its predecessor, is an impressively original outing. It also sounds downright fantastic; thanks to the help of Full Moon Studio’s Jay Rodgers, The Woodgrains is potent and pure with newfound confidence. Flagpole sat down with drummer Evan Amburn and bassist Nick Carroll (guitarist Dylan Crosby resides in Waycross) for a listening session. Listen to the Spotify playlist below as you read along.

Flagpole: It’s such a great moment when the drums come in on this track. Tell me about recording the album at Full Moon.

Evan Amburn: I had never really known [Jay Rodgers] until we played with Kite to the Moon. He was just like, “When are you gonna come record with me? I could do you guys some justice.” Slowly, we became friends and got into his other things, like Dangfly. So, we decided to record there. We had done the last one in Waycross, at a hole-in-the-wall studio. Jay would always tell me that he could get really good drum sounds.

Nick Carroll: It was just a step in the right direction—everything we had at our fingertips, all the equipment.

FP: I love that this song has the fake-out intro. A lot of tracks on the record have moments that are unexpected or playful. What’s the songwriting process like?

EA: It’s very much a [collaborative] thing. I don’t even remember what this song was [like] when we started. [Dylan] is the brains behind a lot of the harmony. He’s got a crazy ear.

FP: There’s also a nice balance between the pretty vocal harmonies and the edgier rock stuff. Is that something you set out to achieve?

EA: A lot of these songs, we were like, “OK, we’ve all got a handful of songs, and we’re gonna go hash it out for a month or two, practicing every day.” So, [some] of these songs got riffy and heavier. It kind of happened quickly. This song could have been scaled back if we wanted to. But Dylan used to always say that he wanted us to be more like, kick-your-ass rock and roll. So, that’s a lot of his influence.

NC: If there’s a vocal line, we want harmonies to be there. But we won’t force it.

FP: So, what about the “Nobody” suite?

EA: I had dropped out of school for a couple years, and I was working this typing job. I didn’t have a car—I was riding the bus. Kind of floating. Trying to find a sense of purpose. And actually, the songs were written backwards. I wrote this one months after the other. This was supposed to be “Nobody Too,” but the sequencing sounded better [this way]. [The songs are] just about being an Athens kid, you know? Broke and trying to look cool, trying to write cool stuff, trying to be relevant, to fit in. There are a lot of really artsy-fartsy people around here, and we’ve been kind of disregarded by that crowd.

FP: Who’s that laughing at the beginning?

EA: We recorded all the vocals late at night—it was like 4 a.m. and we had been tracking guitars all day. So me and Nick were sitting around, like, “OK, let’s do vocals.” We were all in different rooms, and so we were talking to each other. Just goofing off. And that was me, [laughs manically]. At the time, it was really funny, so everyone else [started] laughing.

FP: This song seems very much indebted to ’60s pop. Besides the Beatles, what are your influences from that era?

NC: Crosby, Stills and Nash, and The Band, of course… I had been working on [this song] for a while. I had the first part, and Dylan helped me figure out the second part, when it picks up… It started out as a love song, but each verse is different. This [verse] is about floating around like a ghost.

FP: Who is Richard?

EA: Richard Manuel, from The Band. It was a working title. [Dylan] came to us with this song, and we were like, “It sounds like a Richard Manuel song.” And it stuck. We were in limbo with what to call half these songs, and that was one we decided to let stick. [Dylan] had a big, long girlfriend thing, one of those on-and-off things. It’s kind of funny: It’s this love song, but it’s called “Richard.” This song is probably the best example of how we got to take advantage of the tools at hand.

EA: Me and Nick were talking about, “What are we gonna call these songs?” This could have actually been “Thought of the Day,” which is the next song. But this one is kind of vague in the lyrical scheme of things. So that’s why I left it untitled. It’s very short and spotty. And it kind of goes along with the “Nobody” thing.

FP: It seems like, even though you’re each writing lyrics, there are themes that run throughout the album. Did you work together on writing lyrics?

NC: It was usually pretty separate. But there are universal themes.

EA: Love, and being young and misunderstood. It’s also partially because we’re really such good friends. [Nick and I have] lived together for five years. We’ve been buddies since eighth grade. We’re not one of those bands that like, meets up and practices ’cause it’s 5:30 on Wednesday. This whole thing is completely by accident, just because we were good buddies and we’ve stayed good buddies. It’s not at all forced.

FP: That camaraderie definitely comes across. Why did you choose this song to close out the record?

FP: It has a pretty great guitar solo at the two-minute mark.

FP: What do you hope folks take away from this record, and what to you want to achieve as a band in the next few months?

NC: Hopefully people dig it. Hopefully they take away something. I think everybody can relate to parts of [it].

EA: I hope it’s a thing that people are actually listening to. It’s a fairly short record, so hopefully it will be done and people will play it again. We like it a lot. And that’s the main thing: that you like your own product, that everybody in the band is happy with it. As far as the future…

NC: Keep playing as much as possible.

EA: Just keep chasing it. Our first album, we didn’t push it as much. Hopefully this is the one that will get people’s attention.

FP: What does it mean to be a successful musician?

NC: Just to get by—to get to the next show and have a little in between.