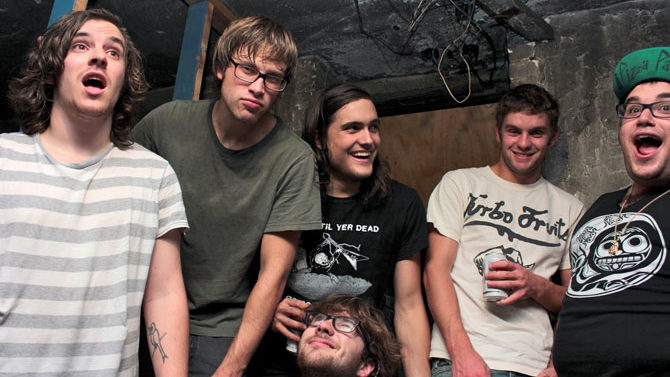 “It’s kind of like a big, excessive blowout,” explains Drew Kirby, who started the emergent organization Freeklife (a play on “Greek life”) as a series of house shows that eventually got out of hand. “We really tore up that house,” Kirby laughs. “[The parties] were huge. There was one that was way too big. We got things stolen. It was terrible. A man went head-first through my glass door.”

The original purpose of Freeklife was a common one: to bring likeminded, college-aged friends together for some serious revelry, says Kirby, a third-year student at UGA who says he has been involved in the business of music, both playing and promoting, since the tender age of 13. “I wanted it to be an inclusive thing. I wanted there to be a network for friends to celebrate. I like the idea of having big events, to add some structure to things we’re already doing.”

When the chance to take the party out of the D.I.Y. arena and into downtown club New Earth Athens came about last September, Kirby and his co-conspirator Sasha Schilbrack-Cole, a recent UGA grad, acquiesced. “The most obvious advantage [to the move] is that we really don’t have money,” says Kirby. “When you ask five bands to play at your house, you’ve gotta make sure they can all play, and their stuff won’t get beer spilled on it.”

The resulting event, dubbed Freekfest (with the tagline “Freeklife Sells Out”) and occurring on Friday the 13th, was thrown together in under a month and featured a wide-ranging cast of Athens and Atlanta bands, including Monsoon, Nurture, Dana Swimmer and Heyrocco. The event drew nearly 400 people; for organizers, not to mention the venue, it was a pleasant surprise, given the lack of a big-name headliner. “It was very successful for what it was,” says Kirby. “It was just kind of us and our friends and some bands that we liked. So, this next one is the next step up.”

“This next one” is the plainly dubbed Freekfest II, which happens Saturday, again at New Earth. The “step up” Kirby refers to is the leap from 10 scheduled performers to 15 and the addition of a big-time buzz band in Nashville guitar-rock outfit Diarrhea Planet, which is riding a wave of critical support of its debut LP, I’m Rich Beyond Your Wildest Dreams.

In addition to the headliner, the second iteration of Freekfest will again feature a stylistically diverse roster of local and regional talent, including Athens standout Brothers, North Carolina scuzz-pop group Junior Astronomers and Atlanta space-rock clan Big Jesus. The event kicks off at 6 p.m. with the debut performance from the anticipated Athens supercrew Uncle Pizza.

Variety of sound has been a hallmark of Freeklife since its humble beginnings, says Schilbrack-Cole, who first met Kirby when Schilbrack-Cole’s loud, aggressive screamo band Nurture (which will also play this weekend’s fest) jumped last-minute (and only semi-invited) on a Kirby-curated house-show bill that consisted mostly of low-key acoustic bands. The mash-up was so weird that it worked.

“There are a lot of cliques around Athens that kind of do their own thing” and also have their own sound, explains Schilbrack-Cole. “It’s cool that, starting out from these house shows, people can come and not really know what to expect.”

One thing folks can expect (in addition to a food truck and, reportedly, even a bouncy castle) is affordability: Like the first one, this installment of Freekfest will only set attendees back five bucks. “It’s important to us that we keep it cheap,” says Schilbrack-Cole. “I hate thinking of it as anti-Greek life, because it’s not really that, to me,” adds Kirby. “But at the same time, we wanted it to be something that literally anyone could [attend].”

Though they express gratitude toward New Earth for taking a chance on Freeklife and hosting the first two “official” happenings, both Kirby and Schilbrack-Cole hope to build their agency into a more formidable force on the local scene by spreading its ongoing happenings over multiple venues throughout the year—events big and small, and in various formats.

The enterprising Freeklife founders also say they want to work to spread the gospel of Athens music beyond our borders, even as they draw outsiders in. “Athens can be very insular,” Schilbrack-Cole says. “Athens bands often don’t travel, and bands who come from out of town don’t necessarily have strong ties with people here like they might in other towns.”

Of course, there have been, and are, plenty of other people and groups in town working nobly towards the same goal for years. Those efforts often prize ambition over energy. This is where Freekfest is different. Wild, cheap and inordinately fun, it’s a reminder that the party is as good an ambassador as any.