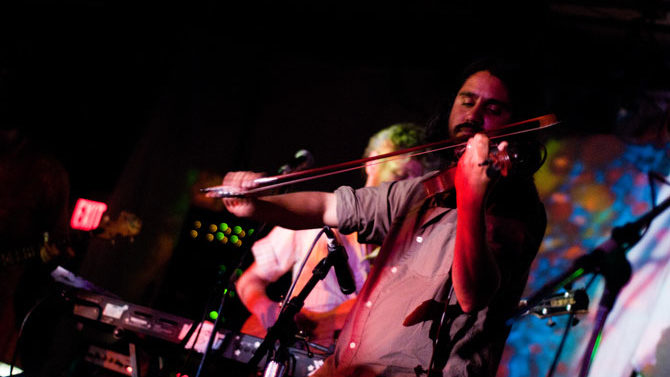 First, an understatement: John Fernandes is one busy dude. When the multi-instrumentalist and legendary Athens scene figure is not manning the counter or locating obscure LPs for curious customers at Wuxtry Records, he is hard at work filling orders for and generally overseeing his Cloud Recordings label, which he formed a dozen years ago as a way to share the music of his adopted hometown with the wider world. Or, he’s at his home, quietly nurturing the artistic impulses of his daughter and two sons (his youngest, Kiran, provides the artwork that appears on the cover of this week’s Flagpole) with the same gentle demeanor he greets friends with on the street.

If he is not doing any of that, then he is probably performing on some local stage or another with one of the five bands that officially count Fernandes as a member—or the other dozen or so with which he regularly guests. What little time remains he spends standing front and center at a show, a friendly and instantly recognizable figure with a half-drained PBR in hand and a perennially stoked smile on his face.

Fernandes’ diligence, and the far-reaching effect he has had on Athens music, will be on full display Wednesday through Saturday, when the inaugural Cloud Recordings Festival takes over the Caledonia Lounge and Flicker Theatre & Bar for four nights of shows featuring nearly 30 local bands.

Fernandes says the idea for the festival came to him one typically hectic night during last year’s AthFest. “I was running from Flicker to The World Famous to Little Kings to play three different shows, and I thought to myself, ‘We should all be playing at one label showcase kind of deal’.”

Stylistically, the featured music will run the gamut from all-out experimentalism (Half Acid, Cult of Riggonia) to starlit folk (Sea of Dogs, Jacob Morris) to straight-ahead pleasure-pop (Casper and the Cookies, The Dream Scene) to mind-bending psych-rock (Hot Fudge) and beyond. The one thing that ties it all together is the organizer’s indubitable influence.

Songwriter Will Cullen Hart, who first encountered Fernandes in their mutual hometown of Ruston, LA before later reconnecting in Athens, where they would play together in Elephant 6 anchor groups like the Olivia Tremor Control and Circulatory System—the latter of which will headline Caledonia Friday—recalls initially being struck by Fernandes’ lust for life.

“His sister and I went to high school together—we graduated the same year,” Hart says. “And I’d go to parties, and he was there. And he was so fucking cool… He was so dedicated. He inspired us all. I mean, John, his energy and passion for being alive and playing music and connecting with souls—it’s beautiful. It really is.”

“I’ve always been gobsmacked by his enthusiasm for the mystery of music. The man has these large tongues dangling from his ears with about a million taste buds each… He’s eclectic and emotionally connected to everything from free jazz to folk-rock to whatever,” writes The Dream Scene’s Javier Morales—who counts Fernandes as one of his oldest friends in Athens and also refers to him as “an extremely nice person”—in an email.

Of Fernandes’ fabled creative fortitude, “My friend Birdie thinks he has some clones running around town doing his righteous bidding,” jokes local musician Charlie Key, who recently began an improvisational collaboration with Fernandes called Freehand. “I don’t know if that’s true, but he is definitely on a mission” to keep Athens’ music scene vital and vibrant, Key says.

Ever modest, Fernandes defers when asked about his impact on Athens. As for his work ethic, he credits his sleepy-small-town upbringing and the famously synergistic early days of Elephant 6 as continuing to inform the way he approaches his work. In Ruston, he says, “we had to band together and support each other to make something cool happen. I think we have an amazing scene going on in Athens, and I want to support it however I can.”

In terms of the bands he has selected to play his label’s first official gathering, Fernandes explains that he wanted to offer an honest picture of what’s currently happening in Athens by corralling together representatives from its many interwoven scenes.

“Things seem just as exciting and vital” as they did in Elephant 6’s heyday, he says. “[There are] so many cool scenes, some of which are represented in the Cloud fest lineup. The Gypsy Farm scene, the Party Party Partners scene… It feels like there is a renaissance going on.”

Some of the bands performing this week have released or will release records on Fernandes’ label; the New Sound of Numbers, playing Saturday at Caledonia, recently put out a stellar sophomore LP called Invisible Magnetic. Likewise, the excellent debut from psych-pop outfit Faster Circuits (at Caledonia Friday) came out on Cloud in June.

Given its honcho’s enthusiasm for local music, there’s little doubt Cloud would release a different Athens band’s album every week if it were possible. But running the label, Fernandes admits, is a tricky task in the modern age.

“The second Circulatory System album that came out in 2009 sold a quarter of what the first record that came out in 2001 [sold],” he says. “We also try to make our packaging as nice as possible, with gatefold ’70s-style album sleeves, but also want the LPs to sell for a reasonable price—so it’s kind of a tight squeeze.”

Still, Fernandes remains undaunted, as is his wont. Circulatory System not only has an album coming out on Cloud in spring 2014, it’s a double-album; both Fernandes and Hart speak of the all-but-finished record with boyish enthusiasm.

The Cloud fest is significant for one other reason. Fernandes will celebrate his 38th turn around the sun Thursday, and he will celebrate by playing music, of course; at 10:30 p.m. at the Caledonia, Freehand will take the stage.

Hart, his longtime friend, offers an early birthday bouquet. “He’s just a sincere person,” he says. “I love him so much. He’s so cool.”

See the full festival schedule in the Calendar.